Having sex with Rawlins.

Nicolas "Nicky" Cavella is an enemy of Frank Castle in The Punisher MAX. He is the main antagonist of the volumes "In the Beginning" and "Up is Down and Black is White". He is a high-ranking member of the Italian mafia, standing out as the most arrogant, sadistic and cowardly of them all. His psychopathy dates all the way back to his childhood.

Nicky's father was in the Italian mafia. Nicky himself was only 8 years old when he murdered his parents and 12-year-old sister under orders from his Auntie Mo, framing his uncle for the carnage so he'll die in his place. Afterwards, Auntie Mo took his young nephew under her own wing, repeatedly raping him to deliberately groom him into a ruthless psychopathic murderer up until he became a teenager, where during one of their coital sessions he smothered her to death with a pillow. When he reached adulthood, Nicky tried to help maintain the mafia's control over Mott Street by giving David Kai a warning, which he did by murdering all three of his sons and even tricking him into cannibalizing his youngest son (who was only in junior high school), leaving Kai alive to hold onto the memory. After hearing what Nicky just did, the mafia ordered him to leave town to ensure his safety from the upcoming gang war. At some point in time, Nicky began a secret sexual relationship with William Rawlins.

15 years later, Cavella returns to help the mafia take down the Punisher for posing an ongoing threat to the organization. In an attempt to achieve this goal, Cavella kidnaps CIA agent William Roth and orders his right-hand man Pittsy to torture and castrate him for information on the Punisher's whereabouts. Upon retrieving the info, Cavella and his men storm a hotel and slaughter several other agents and military officers (and even civilians) while storming their way towards Frank Castle. By the end of the fight, several people on both sides are wounded and killed, and the Punisher escapes with Micro. Later on, however, the Punisher gives Cavella him and Micro's location at an abandoned warehouse, where Cavella callously sends a large number of his own henchmen to distract the two vigilantes while Pittsy sneaks around the back to take them out that way. When the battle is lost on his end and Pittsy is killed, Cavella orders another one of his fellow capos to run towards the Punisher at gunpoint while he runs for dear life. Afterwards, Cavella murders two police officers and steals their car.

One year later from that, Cavella tries to kill the Punisher, this time by luring him out into the open. In this endeavor, Cavella films himself digging up and then urinating on the skeletal remains of Frank Castle's wife and two children. A couple days afterwards, the Punisher tracks down Cavella sitting in his car, which Cavella panics and responds to by grabbing a young boy nearby and holding him at gunpoint. He ends up letting the boy go, but only because the Punisher threatened to give him a painful death if he didn't. In the end, the Punisher takes Cavella (who begs for mercy the entire time) out into the woods and shoots him in the gut, leaving him to painfully bleed out. Hunters found his corpse days after he succumbed to blood poisoning, with his eyes pecked out by birds. 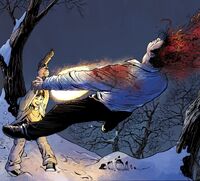 An 8-year-old Nicky sadistically guns down his own father. 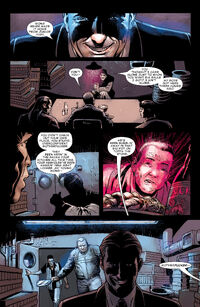 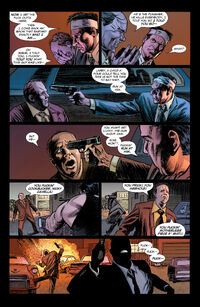 Nicky holds a child at gunpoint.

Nicky groveling when the Punisher takes him out into the woods.

The Punisher shoots Nicky in the gut and leaves him to die.