To make others suffer. (succeeded, till V was destroyed)

He is voiced by Kenjiro Tsuda in the Japanese version, and Christopher Bevins in the English dubbed version.

Although Nico's early life is left unknown and vague, there is small pieces of information about Nico's past. Sometime prior to the story, Nico was at a bar when he ran into Yakumo Oomori. He chatted with Yamori and eventually decided to tag along with him and then joined the Aogiri Tree as a result. He quickly rose through the ranks of Aogiri all the while he took information that he needed and continued to manipulate the course of the story from behind the scenes.

Following the Aogiri Tree takeover of the 11th Ward, Nico traveled along with Yamori as the two of them searched the city of Tokyo in search of the infamous ghoul Rize Kamishiro. Eventually Nico landed in Anteiku where he and Yamori reunited with Ayato Kirishima and Nico then flirted over how beautiful Touka and Ayato tooked since they looked almost alike. Yamori then began to attack Kaneki and Nico witnessed Kaneki's true nature as a One-Eyed Ghuol but Touka was beaten unconscious by Ayato and Kaneki was beaten to a pulp until Nico managed to calm down Yamori and stop the bloodshed. Nico then went with Ayato and Yamori back to the 11th Ward Base. During Yamori's torture of Kaneki, Nico went hysterical when Yamori was about to kill a child and his mom and tried to stop it but the two of them died anyway. As a result, he put the family's bodies together to make then pass into heaven together.

Once the C.C.G. had finally arrived at the base, Nico was on top of the roof where Eto and Tatara had assigned everyone their posts and told them to get into defensive position. Nico just left and then reunited with Souta after he managed to sneak out and watched as the CCG Forces stormed into the base and completely destroyed it. He then shed a tear as his "love nest" was crumbling and Yamori was dead but Nico got better after he deiced to rejoin the Clowns after a short break. Souta then asked if he believed in the One-Eyed King to which he said no but stated how both the king and Yoshimura could somehow be connected. Nico then took out his clown mask and put in on as he stated how the Clowns always "get the last laugh" and the two of them walked away.

Following Kaneki's change and crusade against the Aogiri Tree, he went to Itori's bar where he and Nico reunited once more. Nico told Kaneki that he gave up being part of Aogiri for "Yamori's sake" which calmed down Kaneki but he was still skeptical. Nico then told Kaneki some information about Aogiri's goals and who the One-Eyed King really is.

Kaneki had fought in the CCG's 20th Ward Raid and following his defeat and downfall at the hands of Arima, Nico and the other clowns celebrated the occasion. He then most likely witnesses Kaneki become Sasaki overtime.

Three years have past and Nico still remains alive and well. In Tokyo Ghoul:re he is first seen with Roma Hoito where the two of them look from atop of a building and oversee Sasaki and the Quinx Squad investigating another murder by the infamous ghoul, Nutcracker. Nico then reacts in disgust towards Roma's intent on bringing back the old Kaneki once more and satted how she'll have more fun at the upcoming Auction.

Nico makes an appearance during the Auction where he and a small handful of other Clowns all attend the annual event. he's with Souta, Roma, and Uta where they are all talking about how tragedies are not as popular nowadays and eventually watched a performance by the clowns. Nico most likely fled when the CCG busted in and began killing everyone in sight.

Nico is a tall slender man wearing many feminine clothing despite his male gender. He has pink lipstick on him and wears a bright pink blouse decorated with many frills, a blue scarf, birght orange belt, brown pants with flowers on them, and his clown mask along with bright colorful sunglasses. After the time skip, bios hair becomes much larger forming a semi-afro and wears a headband. He wears a clown mask with a big red nose and smile with black and white paint all over the face and a tear mark on the left eye.

Nico has a very feminine and cheeky portrayal of himself often being homosexual, however he manages to maintain male personality traits. He's quite found of fights, brawling, and other violent tendancies and takes an interest in them. He has a haughty random attitude and loves beautiful things.

Nico on the other hand, has demonstrated that he himself is smarter than he looks. Nico is shown to be quite cunning, manipulative, and very smart. Nico was able to sneak into Aogiri and steal all of the information he's ever wanted from them and is used to succeeding as a result. 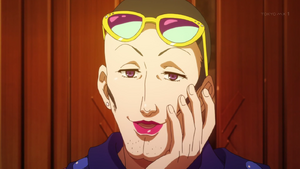 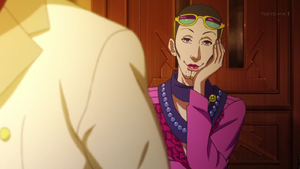 Nico with Yamori at Anteiku 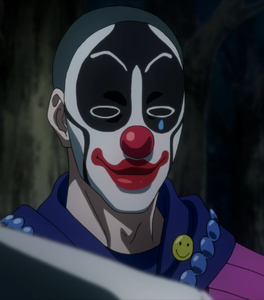 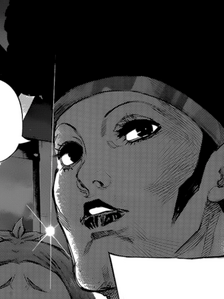 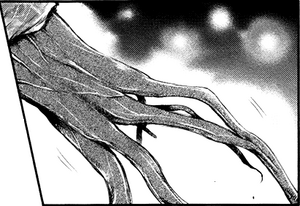 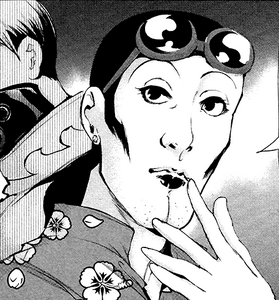 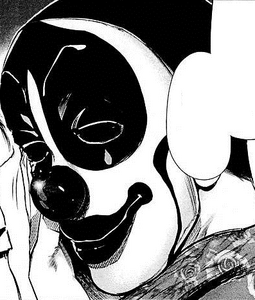 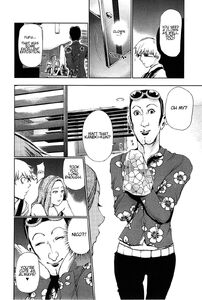 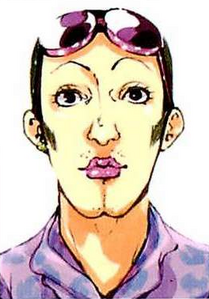 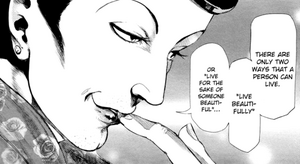 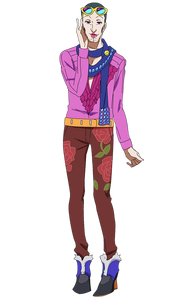 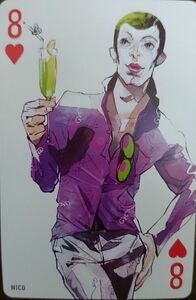 Nico on the Tokyo Ghoul Trump as 8 spades