Take over the entire Multiverse.

Kill or control all other Planeswalkers (both failed).
Defeat Ugin (succeeded).
Regain his lost powers (failed).

Nicol Bolas is one of the major antagonists of the fantasy card game Magic: The Gathering.

He is an Elder Dragon and one of the oldest Planeswalkers, and was one of the only six Elder Dragons to survive the Dragon War (along with his heroic brothers Arcades Sabboth and Chromium Rhuell, his animalistic sister Palladia-Mors, and his enigmatic twin Ugin). At 25,000 years old, he and Ugin are quite possibly the oldest living beings in the Multiverse.

He is the strongest known Planeswalker, with very few able to match or even hold him off in combat. He is also one of the most intelligent and cunning beings in the Multiverse, as he continues to manipulate others into doing his bidding. He uses intricate plans, some of which take decades or centuries to unfold, to slowly gain influence over the various worlds of the Multiverse. His sole purpose is to eventually become the supreme ruler of all existence.

Nicol, like the other Elder Dragons, was spawned from the essence of the metaphysical Ur-Dragon, who seeded the cosmos with his eggs. He was born on the plane of Dominaria, hatching from the same egg as his twin brother Ugin. The twins were the youngest of their brood; their older siblings Arcades Sabboth, Chromium Rhuell, Palladia-Mors, and Merrevia Sal had all hatched from the same bundle of eggs only minutes earlier.

The first thing the two of them witnessed was their sister Merrevia Sal being hunted down and killed by a group of primitive humans. Ugin was saddened and confused, while Nicol was outraged that inferior beings could kill a superior lifeform like her. It's implied that Nicol was also scared that the same fate could befall him, though he would never admit to it. He wanted to kill the hunters, but Ugin restrained him, pointing out that the two of them were outnumbered despite being bigger and stronger than the humans.

At some point after they had both become Planeswalkers, Bolas' maliciousness and power came to Ugin's notice. With the help of the Sphinx Planeswalker Azor, Ugin devised a plan to trap Bolas on the remote plane of Ixalan and ultimately destroy him.

Unfortunately for them, Bolas found out about their plan and intervened, travelling to Ugin's adopted home plane of Tarkir and launching a surprise attack on the Spirit Dragon. Bolas manipulated the shaman Yasova into rebelling against Ugin and using her powers to take control of Ugin's own lesser dragons, turning them against him. After a close battle, Bolas was able to defeat Ugin, leaving him for dead (though he was saved by the time-traveling Planeswalker Sarkhan Vol, who sealed him in a restorative cocoon for the next 1,280 years). Without Ugin to help him carry out the plan, Azor ended up trapped on Ixalan himself.

At some point, Bolas somehow became metaphysically tied to the continent of Madara on the plane of Dominaria, due to a temporal rift that he had inadvertently created thousands of years earlier during a battle with a Demonic Leviathan Planeswalker. As a result, he became unable to physically manifest on Dominaria without anchoring himself to local mana lines, lest his presence overwhelm the plane and crack its foundation. Three lines of blue, black, and red mana intersected at a single point on Madara that was ideal for Bolas's purposes. Bolas slew the then Empress of Madara and erected his Imperial Shrine on the focal point. From there, he reigned for 400 years as God-Emperor of Madara.

Unfortunately, Bolas created his own worst enemy in the form of his Imperial Champion, Tetsuo Umezawa. After several trials, Tetsuo renounced his title and declared his intention to slay Bolas, killing the dragon's regent. In a fit of rage, Bolas abandoned his body to follow Tetsuo's spirit into the Meditation Plane, unaware that it was a trap. This would ultimately prove to be a fatal mistake: Using the Meteor Hammer spell, Tetsuo destroyed Bolas's Imperial Shrine while Bolas's physical body was inside, severing the elder dragon's anchor to Dominaria completely.

Without a physical form, Bolas' spirit-form was unable to escape back to Dominaria or any other plane, and without his connection to the abundant Dominarian mana that he used to fuel his spells, he was left without most of his magic. His physical superiority was rendered irrelevant by the nature of the Meditation Plane, which was a realm of thought and spirit; furthermore, Bolas was largely unaware of its workings, while Umezawa had experience manipulating the fabric of the plane's reality. Stripped of his advantages as a planeswalker, a sorcerer, and a dragon, and forced to battle in a realm where his opponent had a significant edge, Bolas was defeated and apparently killed by Umezawa.

However, as a result of his connection to the temporal rift, a ghostly remnant of his life force still lingered by the Madaran coast, trapped between the material world and the Meditation Realm.

As the temporal rifts expanded, Bolas became able to manifest in Madara again, albeit as an immaterial shade. In this form, he presented himself under the alias of Sensei Ryu. When he sensed that the Planeswalker Teferi was lost in a rift and had become separated from his companions he arranged for them to arrive on the Madaran beach near the Talon Gates. Using the Planeswalker Venser's latent abilities, he was able to finally escape his prison and be fully reborn into the physical world, regaining his body by pulling a copy of it through the rift from an earlier point in time.

After Teferi located his companions, he challenged the dragon to a duel in an effort to stay Bolas's "gratitude." Bolas easily won, absorbing and planeswalking away from Teferi's attacks, after which he tortured him with his mind shattering touch and ripped his body to pieces. While Bolas was taunting Teferi's allies with the defeated planeswalker's head in his claw, the dying Teferi shared his knowledge of the collapsing planes with him and he was made aware of the severity of the rift problem. Bolas decided to let Teferi live, allowing the dismembered mage to heal himself.

Bolas later returned to Madara, where he was ambushed by the Planeswalker Leshrac, who formally challenged him to a duel; the latter was defeated and trapped in a mask after an epic battle. Bolas then used Leshrac's life force to close the rift.

Although the Multiverse survived the time rift crisis, Bolas lost a significant portion of his magical powers. Still, he retained the formidable powers of an Elder Dragon as well as his unmatched intellect, and quickly set into motion a series of plans to restore himself to his former glory. So far, he has succeeded at regaining some of his lost powers by absorbing the multiversal energies released when the five demi-planes of Alara merged back into a single plane. He has also established an interplanar crime syndicate known as the Consortium to do his bidding, enslaved the Planeswalker Tezzeret to his will, brokered a deal between the Planeswalker Liliana Vess and four greater demons (which would ultimately result in him being able to take control of Liliana after she'd managed to kill those demons), manipulated other Planeswalkers into releasing the Eldrazi - ancient and incomprehensible eldritch abominations of unimaginable power and destructiveness - from their prison on Zendikar, gained access to a working interplanar portal created on the high-tech plane of Kaladesh, created an undead army for himself on the dying plane of Amonkhet, and taken the Immortal Sun (the artifact that Azor had created in order to trap him on Ixalan) for himself. The next part of his plan apparently involves a full-scale invasion of the city-plane of Ravnica, for purposes currently unknown. After Belzonlok was killed, Bolas arrived on Dominaria and claimed ownership over Liliana's contract.

War of the Spark

Using Project Lightning Bug, Bolas managed to lure dozens of Planeswalkers to Ravnica and imprisoned them all with the Immortal Sun. He has claimed Ravnica as his own and is attempting to complete the Elder Spell which would allow Bolas to absorb all of the Planeswalker Sparks on Ravnica and become a God. He begun the war by sending Liliana and the Dreadhorde to cause havoc on Ravnica. This forced the Ravnicans and other Planeswalkers to stop him once and for all. The Planeswalkers split into groups in an attempt to thwart Bolas's plan. Gideon, Aurelia, Angrath, Huatli, Tamiyo, Narset, Kiora, the Wanderer, Tibalt, Davriel, and eventually Sorin and Nahiri were in charge of fighting the eternals. Chandra, Nissa, Saheeli, Lavinia, and Lazav fought Dovin Baan and destroyed the Immortal Sun. Dack Fayeden, Karn, Ob Nixilis, Samut, and eventually Sarkhan used the Planar Bridge to fight Tezzeret and shut down the bridge permanently. Kaya, Ral Zarek, Vraska, and Teyo Verada recruited the Guilds to join the fight. Vivien, Jace, Jaya, and Teferi were tasked with Killing Liliana. Ajani, Jiang Yanggu, Mu Yangling, and eventually Huatli helped saved civilians. One by one, each group completed their tasks except the group that was supposed to kill Liliana. Once he collected Domri's spark, he completed the Elder Spell and started to absorb the sparks of other Planeswalkers. Liliana rebelled against Bolas and he punished her by having her contract kill her. To everyone's surprise, Gideon sacrificed himself to save Liliana. Now free of her contract and with the reborn Niv-Mizzet's help, Liliana orders Oketra and Bontu to attack Bolas and they harvest his spark. The two undead gods are destroyed and Bolas is no longer a Planeswalker.

After his defeat, Bolas was brought to the Meditation Realm by Ugin. Since he wasn't a Planeswalker, the experience knocked him out and weakened him severely. Ugin told Bolas that the Meditation Plane was always his and he helped Niv-Mizzet come back to life. Ugin also revealed that the gem floating above his head contained a part of Ugin's soul which allowed him to watch Bolas without detection. Ugin then removed both of Bolas's names so he could never be summoned again. Ugin became Bolas's warden and the two were removed from the Multiverse for all eternity. 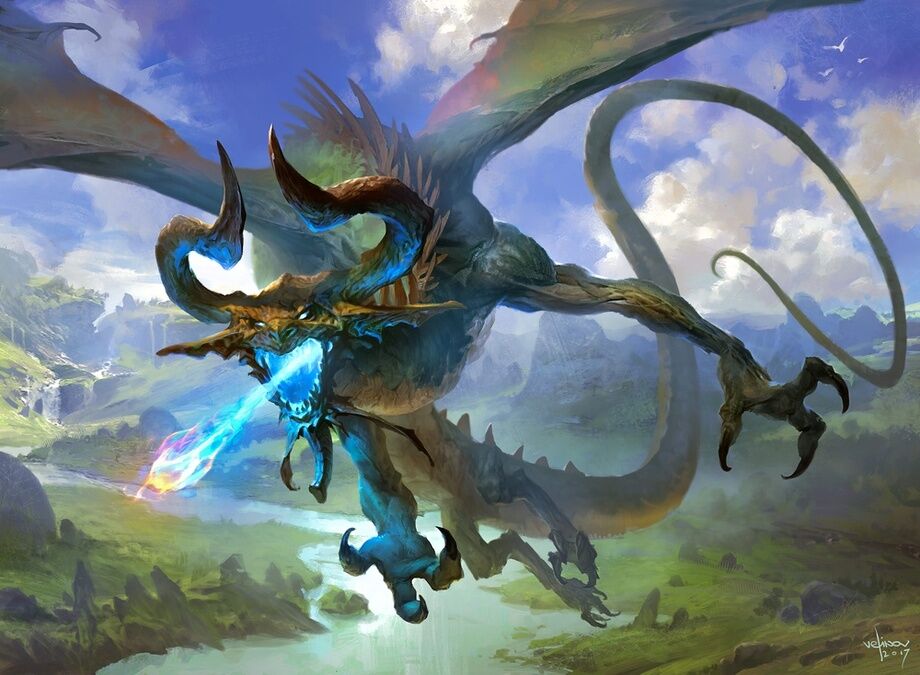 Nicol Bolas before he was a Planeswalker 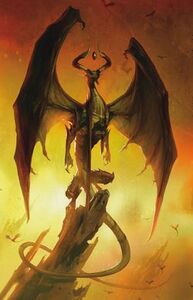 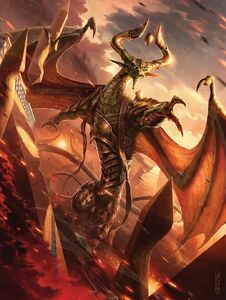 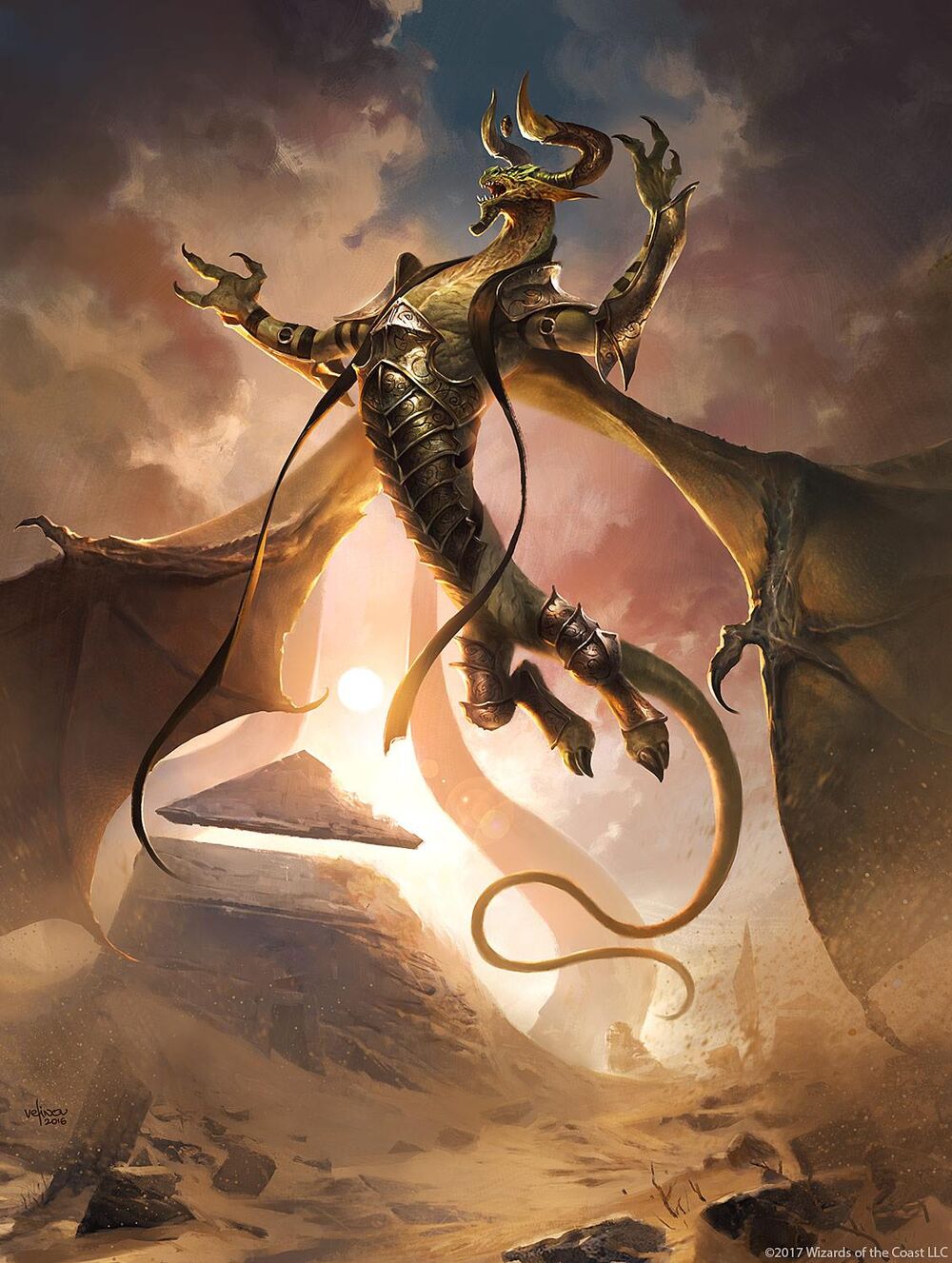 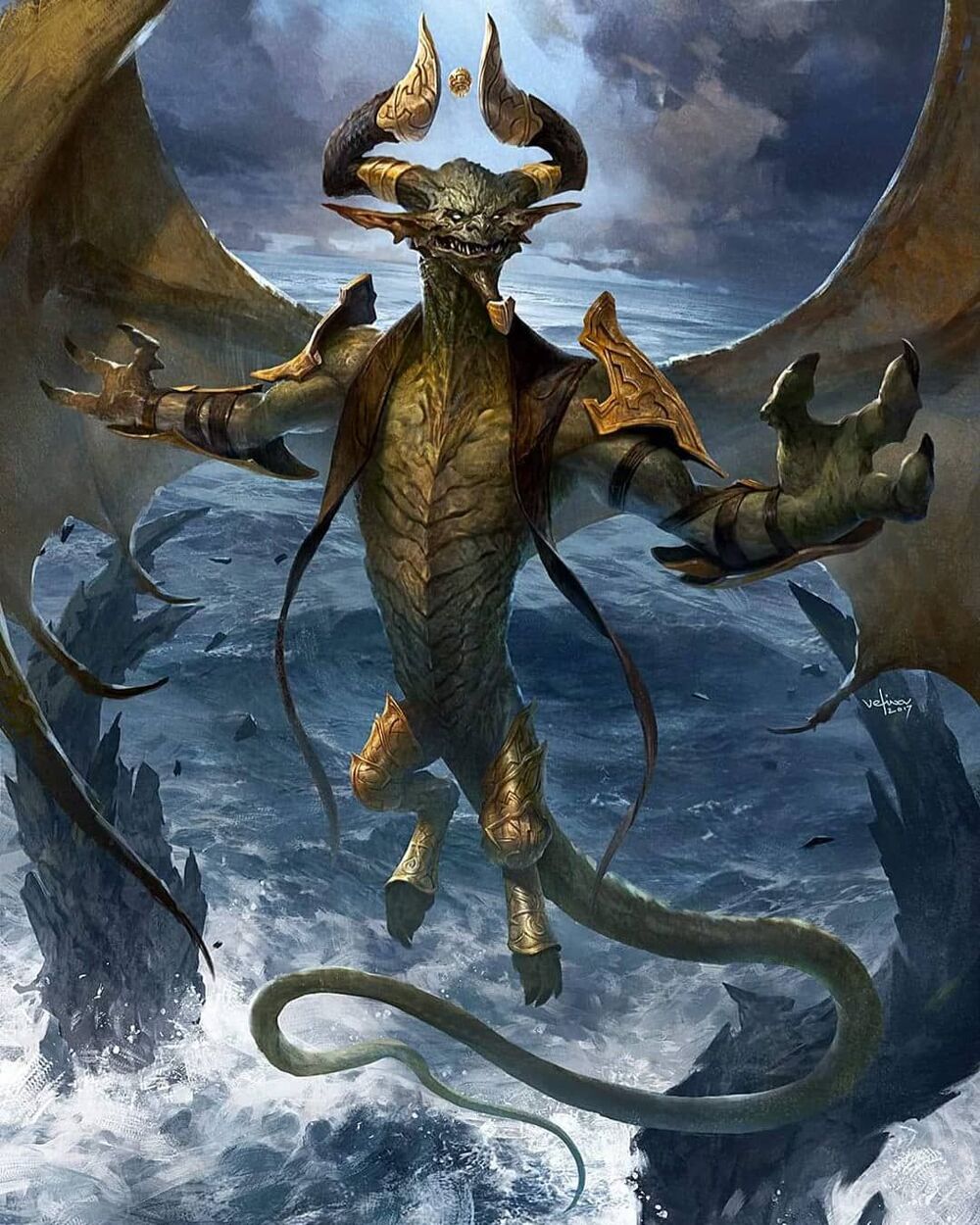 Nicol Bolas after his spark ignited 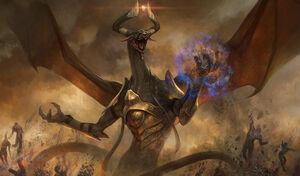 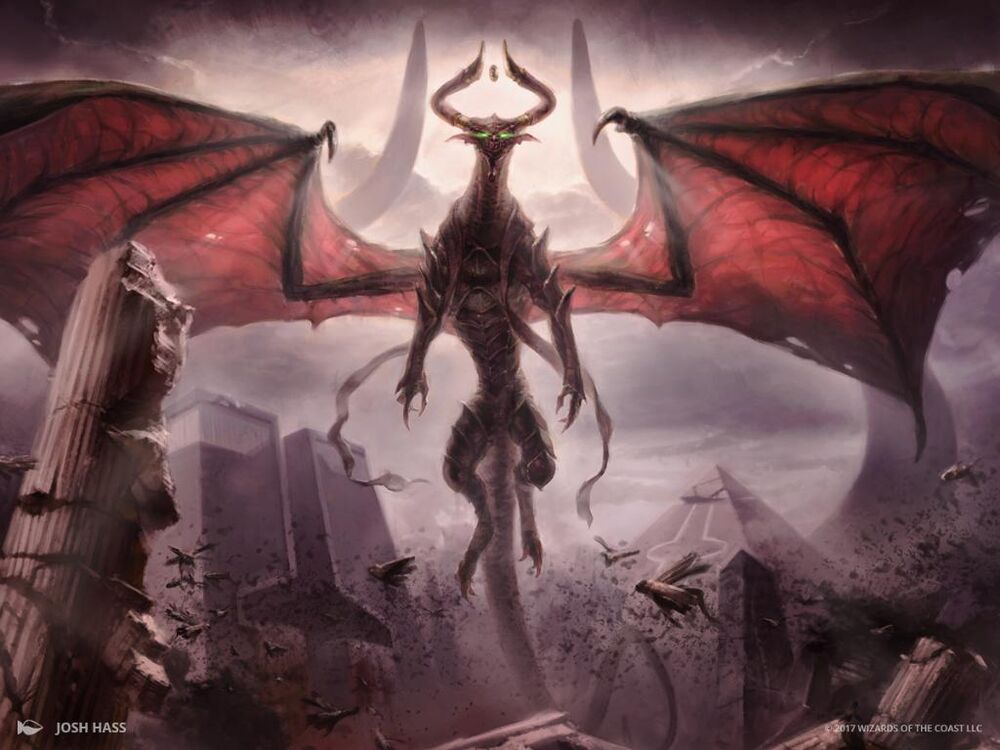 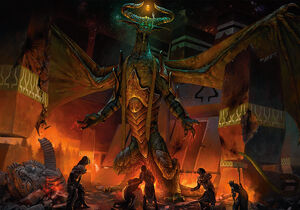 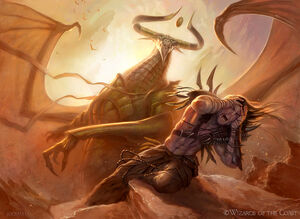 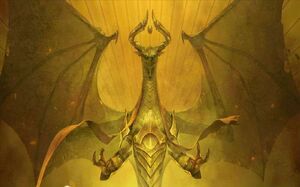 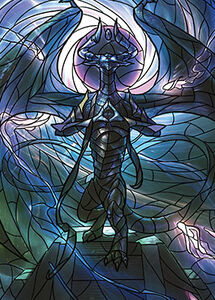 Bolas in War of the Spark 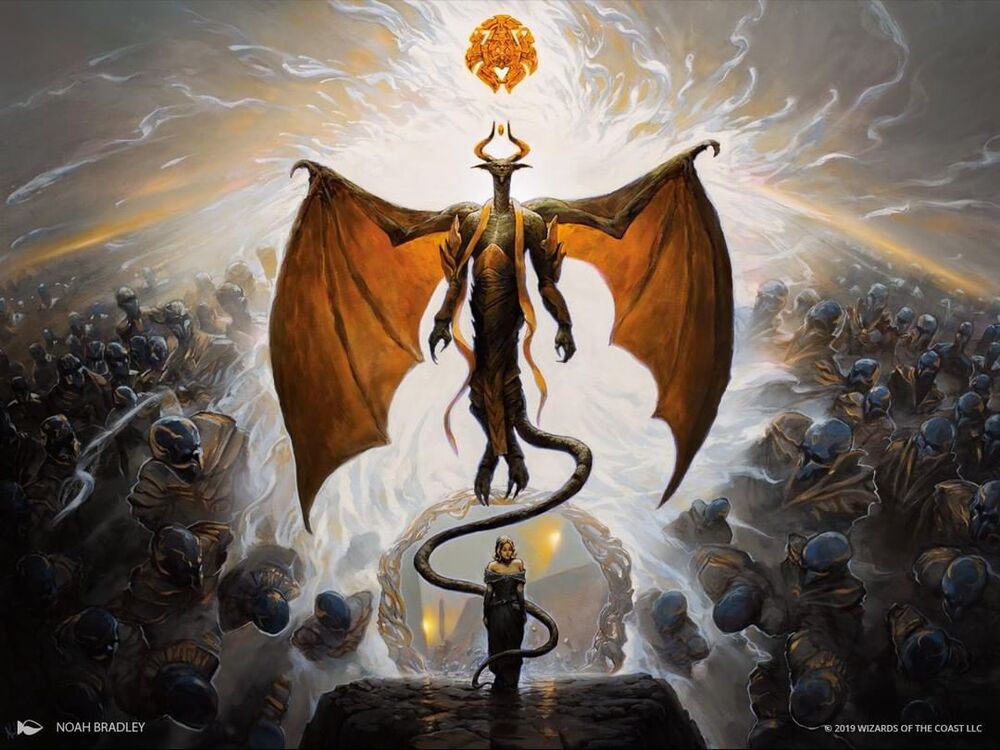 Bolas engaging in the final battle with the Gatewatch 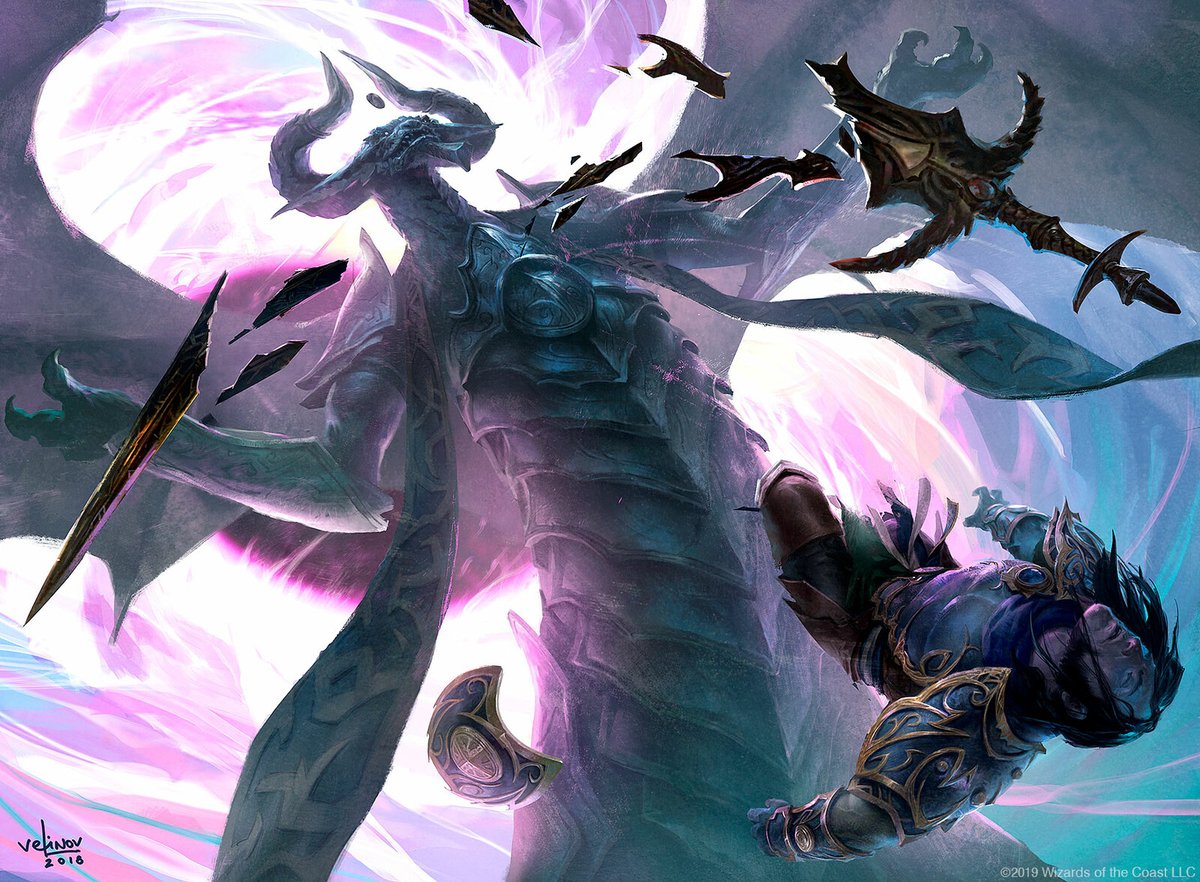 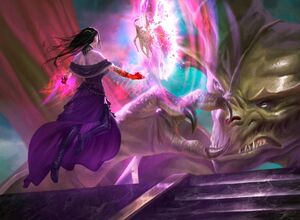 Bolas being defied by Liliana 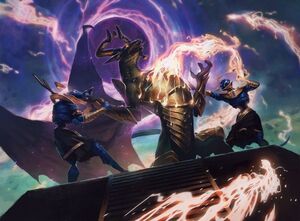 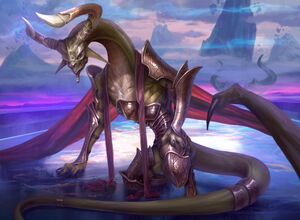 Retrieved from "https://villains.fandom.com/wiki/Nicol_Bolas?oldid=3551147"
Community content is available under CC-BY-SA unless otherwise noted.