Cardinal of the Catholic Church

Second in command of Sapientes Gladio

Reading forbidden texts (such as the Three Ancient Tomes).

Nicholas "Nicolai" Conrad is one of the main antagonists in Shadow Hearts: Covenant, and his actions lead in part to the troubles that plague the world in Shadow Hearts: From the New World. He is fond of deceit and fancies himself more important than his own allies and that includes his master Rasputin. Disguised as a priest and exorcist, he was sent to investigate the Demon of the small French village Domremy. He is actually a heretic whose charming smile hides his darker nature.

Nicolai is the product of a union between Tzar Nicholas II and an unnamed peasant woman. His father either never knew about him or simply never claimed him and his mother died when Nicolai was still very young; as a result, Nicolai is very bitter towards the Tzar, if not for never claiming him then certainly for abandoning his mother. Nicolai was taken in at a young age by Grigori Rasputin although whether this was an official adoption or just looked after is unknown. But whatever the case Rasputin never made secret that he took in Nicolai for the sole purpose of using him as an ace-in-the-hole to gain leverage in the Russian court. Rasputin sent Nicolai to be formally educated and arranged for him to join the Vatican as an ordained Cardinal of the Catholic Church. Nicolai was of course working as a pocketed offical the entire time he was in the Church for Rasputin's terrorist cult, Sapientes Gladio.

Nicolai was sent to the Vatican presumably for influential information gathering purposes. But eventually his placement their gained a much more focused purpose; the acquisition of a holy relic to defeat the demon god Amon. Sapientes Gladio had not always been a terrorist group, it had once been an equal rights movement. One of Sapientes Gladio's members from its more peaceful days, a man called Cardinal Albert Simon, had made a soul pact with the demon-god of wrath Amon. Simon intended to use Amon's power to destroy Rasputin who had long since made his own soul pact with the demon-king Asmodeus. To the surprise of all those within Sapientes Gladio Simon did not use Amon right away but instead set on a path to remake the entire world and not just defeat Rasputin but wipe the influence of Asmodeus from the world. Rasputin had Nicolai immediately begin searching for a way to exorcise Amon from the world. Nicolai eventually heard of the relic known as the Holy Mistletoe. It was said “the Mistletoe was a powerful item used for centuries as a tool for guiding lost souls.”; what that meant was the Mistletoe would banish demons and erode the human souls connected to them. Nicolai's next mission was to find where it was being held and retrieve it.

Unfortunately by the time Nicolai had found the information on the Mistletoe and deduced a plan to get it Albert Simon had already passed the soul of Amon onto a young man named Yuri Hyuga. Yuri was a harmonixer, a being that could fuse with the souls of monsters he defeated so when Amon was crushed by Yuri and turned to light its soul passed onto him. Though Cardinal Simon had been defeated Yuri was still a danger to Sapientes Gladio so Nicolai continued with the plan. Yuri was defending the small French village of Domremy from invaders, one of which was the German army as World War I had just started. Nicolai went to the German government “on behalf of the Vatican” when he heard his prey was in the area. He claimed he knew of a way to give them the blessing they would need to take the area from the evil protecting it. Nicolai was given Lieutenant Karin Koenig, who had first encountered the monster in Domremy, as a guide. Before they traveled to Domremy, Nicolai first wanted to use the beautiful lieutenant's military training to aid him in breaking into the Apoina Tower, resting place of the Holy Mistletoe. After fighting their way passed the sacred beasts that inhabited the Tower Nicolai finally gained the Mistletoe. Once they had gotten to Domremy Nicolai showed his true nature to Karin and held the village hostage to lure Yuri out. Nicolai killed one of Yuri's friends, a girl named Jeanne and wiped out Karin's support unit. Nicolai attempted to defeat Yuri on his own but was far outmatched so he plunged the relic into Yuri's body and placed its curse upon him sealing Amon's power, as well as the souls of other apparitions Yuri had fused with. Karin turned on her manipulator and helped Yuri escape in the chaos. Yuri was not killed but his soul was slowly wasting away and his powers were sealed so Nicolai was victorious for the moment.

But with Yuri now at odds with the order Nicolai needed to keep things moving in Sapientes Gladio. Sapientes Gladio had made connections with a Japanese military diplomat named Masaji Kato. Kato was an old friend of Yuri's but at the time knew nothing of Yuri's involvement with the Sapientes Gladio and the group knew nothing of Kato's connection to Yuri. Kato had the authority to create officially recognized alliances with whomever he choose and so after dealing with Yuri, Nicolai was sent to bribe Kato into making and alliance with Sapientes Gladio. Kato had lost someone very dear to him and wanted to get his hands on a book that could bring the dead back to life and manipulate the flow of time; a powerful book called the Émigré Manuscript. Simon had stolen the manuscript and Yuri acquired it from him when he defeated him so Nicolai's new mission became to acquire the book. He kidnapped the book's creator, Roger Bacon and when Bacon wouldn't talk Nicolai decided to barter the old monk's life to Yuri for the book. Nicolai set a trap for Yuri and took the Émigré on his way to deal with him. But Nicolai had not told any of Kato's demands his men or even Rasputin. Rasputin was laying the final stages of a plan to size the Russian throne for himself.

Once Nicolai had the document he used some information he found within to find the resting place of the demon-lord Astaroth. Astaroth was the third of the three greatest lords of hell along with Asmodeus and Amon. Nicolai made his own pact with the demon-lord to stand as a peer with Asmodeus and Amon. The timing was perfect too as Yuri had recently halted the curse of the Mistletoe and regained Amon's power through the help of Albert Simon's spirit. When Nicolai gave Kato the cursed tome he asked if Kato would support his lord Rasputin....or anyone else that happened to inherit the Russian throne, Kato understood Nicolai's meaning and agreed to the terms. Nicolai now simply had to wait for Yuri/Amon to face Rasputin/Asmodeus and kill the winner making himself the new ruler of Sapientes Gladio AND the rightful Tzar. It was clear even after all this time that Nicolai still wanted his birthright denied him by Tzar Nicholas II. Yuri defeated Rasputin, scattered Sapientes Gladio and exposed the scheme to kill the Tzar, to combat Yuri though Rasputin fully invoked the power of Asmodeus. Nicolai confronted “Rasputin” about how his plans would proceed but at this point “Rasputin” had given up on his ambitions in favor of just making mankind suffer; it was at this point that Nicolai realized Rasputin had became completely possessed by Asmodeus.

Nicolai left Rasputin/Asmodeus in despair that his plans to kill Rasputin and take the throne would be worthless now. Nicolai reached out to the only other person in the world that had meant anything to him, Karin, whom he had by this time fallen quite in love with. But Karin rejected him seeing passed his pretty words and pretty face to the sort of person he was. Nicolai became so devastated that he began to give into the will of Astaroth laying inside him. Nicolai returned to the Apoina Tower to release a vault kept safe by the Mistletoe's guardians until then. The vault had filtered out the suffering and evil from the souls of the departed over the centuries and now Nicolai under Astaroth's influence was going to release it. Yuri Karin and their allies once again made it to the tower to stand in Nicolai's way. Nicolai released the vault as planned and transformed into Astaroth to fight them. This time though Yuri and his friends won and Nicolai was nearly killed. He was saved though by Kato of all people who officially saved Nicolai to use to challenge the Russian throne but unofficially wanted to use Nicolai as a research subject to extract and control Astaroth. Though Nicolai had indulged Astaroth he had far from given into the demon-lord.

Astaroth was kept buried beneath Nicolai's massive ego. However, the experiments were carried out by and an epically sadistic and obsessive scientist named Dr. Hojo who accidentally released Astaroth from Nicolai's ego while trying to extract it from his body, as a result Nicolai became completely possessed by Astaroth. The difference between Astaroth, Asmodeus and Amon should be noted; which is to say that Amon is a karmic harbinger of destruction and does not care if he does so for good or evil, Asmodeus wants mankind to suffer and die slowly at his hands and Astaroth wants to corrupt the souls of mankind and watch them kill each other while he destroys the world in a much more immediate fashion than Asmodeus. Unlike his rivals Astaroth also does not like to shed blood himself he prefers to sit back and let others do it for him.

Yuri and his friends defeated Astaroth eventually and Nicolai was at last in control of his own body again. But by this time Nicolai was so angry over how far out of control things had gone thanks to Yuri and Kato that he lunged at Kato with a broken shard of Astaroth's fatally poisonous claws. Nicolai missed his target as Kato had been blocked by Ouka, the homunculus Kato had created with the Émigré Manuscript. Ouka died in Kato's arms and in a rage Kato crushed Nicolai's skull with his bare hand. Even after his death the malice Nicolai had released would continue to plunge the world into strife and chaos, escalating the remainder of World War I and leading to World War II, it would not be put back into check until the events of Shadow Hearts: From the New World.

Nicolai's power include the power to project beams of holy light at opponent, heal himself and others, enchant weapons with holy rites and break mystical seals. Nicolai has the natural talents of swordplay and can handle his sword with deadly efficiency, charismatic fineness and good looks, above average intellect, high though not indomitable willpower and enough knowledge to effectively use most any magical item. When merged with Astaroth he also has the power to use incredibly powerful holy magics, can resist holy magic and dark magic, dominate others, use telepathy, inflict an incurable poison with his claws and radiate a powerful aura that resonates with that of any nearby ley-lines. 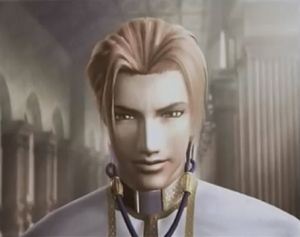 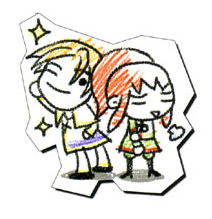 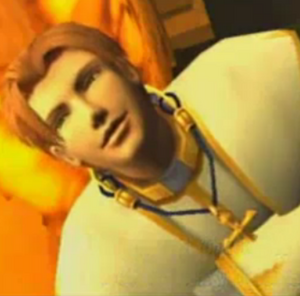 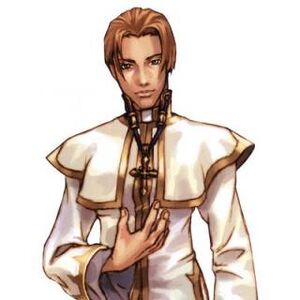 Retrieved from "https://villains.fandom.com/wiki/Nicolai_Conrad?oldid=3305976"
Community content is available under CC-BY-SA unless otherwise noted.