Using Soviet propaganda in the US.

Have Drago prove that Soviet boxers are superior than those of Americans (failed).

Nicolai Koloff (Russian: Николай Колофф) is one of the two main antagonists of the 1985 film Rocky IV (alongside Ivan Drago) and it's 2021 recut Rocky IV: Rocky vs. Drago - The Ultimate Director's Cut. He is a Soviet diplomat who served as the manager to Soviet captain Ivan Drago.

He was portrayed by the late Michael Pataki.

Koloff first appeared arriving to America with Drago and his wife Ludmilla, along with Drago's trainers Manuel Vega and Sergei Rimsky, as Drago intends to fight Rocky Balboa in an exhibition match to prove that Soviet boxers are superior in combat than than of Americans. To that end, Koloff explains about the statistics and capabilities that Drago's strength has brought up, and that whatever comes into Drago's way will be destroyed.

However, former champion Apollo Creed decides to come out from retirement to fill in for Rocky as he wants to refute Koloff's intentions to the world. During an exhibition match between Creed and Apollo at Las Vegas, Koloff watches as Drago and Creed boxed against each other. However, Drago's strength proved to be too much for Creed, allowing Drago to finally punch down Creed in one fatal punch. Koloff watches in satisfaction as Creed falls to his death, much to horror of Rocky and the American public; even Drago himself shows no remorse on this by saying "If he dies... he dies".

With the American public outraged at Creed's death, Koloff grew worried over Drago's life since he's being jeered for causing it, even accusing the public to make the world believe that the Soviets are cruel in nature. Eventually, a furious Rocky decides to take action by challenging Drago to fight in Russia at Christmas, to which Koloff accepts, hoping that Drago will defeat Rocky to prove how weak the Americans are in nature. As such, Koloff helps Drago in training out for the match, even ordering the trainers to inject a few steroids on him.

During the match, Drago seemed to gain the upper hand (much to Koloff's delight), but Rocky finally turns the table, earning the respect of the Soviet audience. Seeing this, Koloff angrily calls Drago an idiot and orders him to fight back, but an angry Drago grabs Koloff by the neck and shoves him, telling him that he only fights to win for himself and nothing else. This made Koloff realize in shock that Drago has renounced his patriotism for the Soviet Union. Eventually, at the final round of the match, Rocky was able to avenge Creed's death by defeating Drago with a knockout punch, thus winning the challenge. Upon seeing this, Koloff became very upset, but as the other Soviet spectators applaud for Rocky, he grudgingly gives in. 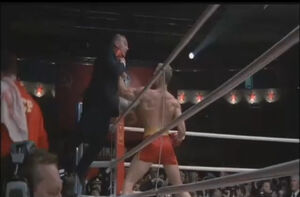 Koloff being betrayed by Drago.