Representative of the Marker (in reality)

Consume Isaac to start the Convergence (all failed).

In Dead Space 2, a phantom of the late Nicole Brennan produced by the Site 12 Marker haunts Isaac throughout Dead Space 2 and is arguably the posthumous main antagonist of that game. A hallucination of Nicole did appear in Dead Space, but was merely of Clarke's growing dementia.

The thought form is from the Site 12 Marker on the Sprawl, a residence on the last shard of Titan, one of the moons of Saturn. Before this however, Nicole was Isaac Clarke's girlfriend before he encouraged her to join the USG Ishimura. There, a Necromorph Outbreak started, and not wanting to be killed by one of the creatures, Nicole committed suicide in the Medical Deck while sending a farewell message to Isaac.

Isaac would go on a repair mission to find Nicole, but only find death and misery on the ship. Eventually, Isaac saw the message once again - this time till the end, provided by Kendra Daniels, who was a EarthGov spy, and saw Nicole commit suicide. Before he learned of this however, Isaac began to saw hallucinations of Nicole, being affected by the Marker, and she would aid him to escape from the ship. After Isaac destroyed the Hive Mind and Marker, he was attacked by a hallucination of Nicole (it's unknown if the Site 12 Marker Nicole is the same one). In addition, Nicole's body was never found in the Medical Deck room, indicting that she transformed into a Necromorph, and was possibly killed by Isaac.

Afterward, Isaac was found and taken to the Sprawl, being a test subject to create the Site 12 Marker by Hans Tiedemann. Clarke and Nolan Stross eventually created the marker, and Nicole's thought form would become more present.

Nicole first appears during Isaac's session with Foster Edgars, who provides information on the marker, causing Nicole to climb onto the desk and state "make us whole". Her eyes and mouth glow, leading to a blinding light as Isaac is awakened by Franco inside Titan Station Medical Center. Her voice is slightly heard when Isaac enters the showers and suffers dementia, as she calls his voice and a shadow of Necromorph appears behind him. She later appears in the elevator, as the twinkle little star song can be heard. As the game progresses, "Nicole" becomes more violent and disturbing, making attempts to hurt and even "kill" Isaac. In addition, she appears on monitors and advertisements to torment Isaac, even making Isaac do suicidal things such as attempting to stab a needle into his eye (but to him it was Nicole attempting to stab him with it).

Later, deep in Titan Mines "Nicole" threatens to kill Isaac unless he explains why he can't "let her go". When he does explain that if he had let her go he would have nothing left, "Nicole" loses her haunting visage and appears as she did when she was alive. Stating step four, acceptance, she tells him to finish his mission. Inside the Government Sector and from then on until closer to the end, "Nicole" continues to appear before Isaac, giving him encouragement and advice on how to destroy the Marker and points him a way where to go. After Isaac goes through the machine, she tells him to get to the marker. Before he makes it to the marker, she tells Isaac to stop fighting, and to let her go, hinting that she hasn't entirely reformed.

Things take a turn for the worst after Isaac finally reaches the Marker and dispatches Tiedmann. After "Nicole" embraces Isaac in front of the Marker, she then attempts to kill him again, this time in Isaac's own mind. She reveals that the makers of the Marker must be absorbed for the Convergence to be complete. Betrayed and infuriated, Isaac fights and defeats "Nicole" and in turn, destroys the Marker. Isaac survived the event, being rescued by Ellie before the station was destroyed.

Unlike the real Nicole, this phantom was aggressive, violent, and chaotic due to being a dark figment of Isaac's dementia. All her appearances are usually distorted, with her yelling words to Isaac as torment and to drive him insane and evoke guilt for her death. When Isaac accepted Nicole's death, she appeared to have returned to the real Nicole, being kind and encouraging. That being said, it was just a ruse to get Clarke to the Marker, thus showing her true nature when she went into his mind.

Nicole constantly mocks Isaac, stating that he tried to kill himself, and reminding him that he cannot ignore "the pain" forever. She also hints about the real Nicole, as she knows of that she and Isaac were together for two years. This could be explained that since she is thought form from Isaac's mind, he is thinking of this, or she knows what Nicole was thinking before her death. During the early chapters of Dead Space 2, she talks about her fear of not wanting to die, but eventually becomes antagonist towards him when he starts to ignore his guilt. 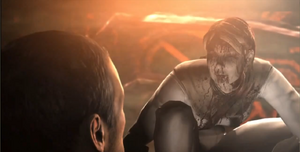 Nicole in the opening of the game. 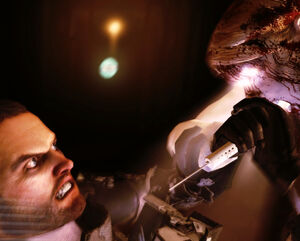 Nicole attacking Isaac with a needle. 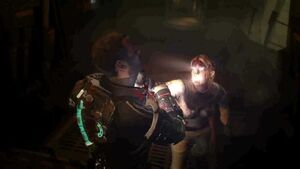 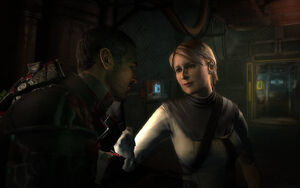 Returning to a normal state amidst step four. 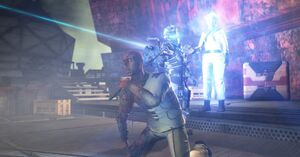 Nicole awaits for Isaac as he finishes off Hans Tiedemann. 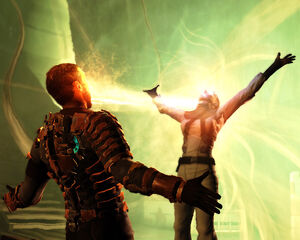 Nicole reveals her true colors during the convergence.