Villains Wiki
Register
Don't have an account?
Sign In
Advertisement
in: Mature, Game of Thrones Villains, Destroyers,
and 59 more

The True Enemy
He

King of the White Walkers

Ruler of the Lands of Always Winter

Increasing his army of White Walkers and Wights.

Bring about the Night that never ends (according to Melisandre).
Bring the Long Night and erase the world and its memory (according to Bran; all failed).

The Night King is one of the overarching antagonists of the TV series Game of Thrones. Having existed since the age of the First Men, the Night King is the leader of the White Walkers, the very first of their kind and, by extension, the master of the wights. He is a creation of the television series and is not expected to appear in the A Song of Ice and Fire novel series.

The religion of R'hllor claims that he and the Walkers are servants of an evil god of ice, archenemy of the Lord of Light, known as the Great Other. Red Priests claim that only Azor Ahai reborn can stop them and the Long Night that Never Ends. It is shown that the Children of the Forest created him as the very first White Walker to defeat the invading humans known as the First Men. The Night King himself was a First Man.

The episode "Oathkeeper" reveals the fate of the infants, as well as introduces the Night King. A White Walker takes Craster's last son to what appears to be an altar where the Night King himself greets the infant, and with a poke to his cheek, turns him into another White Walker.

In the episode Hardhome, in which Jon Snow, now Lord Commander himself, goes to the titular village on a mission with Tormund, to make peace with the remaining wildlings from the army of Mance Rayder fled during the attack of King Stannis Baratheon (all the other wildlings and giants are around beyond the Wall like groups, Craster's wives, and a group at the river Milkwater) and get them to the Wall. While they are evacuating the village, an army of wight's attack, and a massacre ensues. The Night King and other White Walkers oversee the attack. During the fight, Jon Snow kills as White Walker, which the Night King witnesses. After the fighting, Jon and his men flee with the last of the evacuates, and the Night King walks down the dock. Jon and the Night King make eye contact, and the king has him watch as he resurrects the dead of the battle into new wights.

Later in Beyond the Wall the Night King and his army surround Jon, Sandor Clegane, Tormund Giantsbane and Beric Dondarrion north of Eastwatch-by-the-Sea, during their mission to capture a wight to show proof of the White Walkers' existence. Daenerys Targaryen and her three dragons Drogon, Viserion and Rhaegal arrive to rescue the group, but the Night King takes an ice lance and lunges it through the sky directly at Viserion, successfully killing the dragon. The group narrowly escapes, but the Night King then resurrects Viserion as an undead dragon. He rides the wight of Viserion and destroys the eastern part of the Wall at Eastwatch-by-the-Sea, breaking the spell of the Children of the Forest and making a passage for his army to invade the Seven Kingdoms. The Night King's army is currently marching south, invading the Seven Kingdoms.

The Undead successfully sack Last Hearth and kill off House Umber, then proceed to march on Winterfell. The defenders fight valiantly, but the Undead are beyond count and eventually breach the walls. The Night King himself engages Jon and Daenarys on their dragons, but later retreats to Winterfell and raises the fallen dead. The Night King then proceeds to enter the Weirwood forest, intending to kill Bran. Theon makes a brave, but vain attempt to protect Bran, but the Night King kills Theon by impaling him through the abdomen with his own spear. The Night King proceeds towards Bran, and reaches for his sword. But just as it seems that all hope is lost, Arya lunges at the Night King from behind only to be grabbed by the throat. But before the Night King can finish her off, Arya drops her Valyrian steel dagger and uses her free hand to catch it in midair before driving it into the Night King's chest, destroying the Night King, the White Walkers, and Wights once and for all, after thousands of years of spreading terror.

Despite the extinction of the White Walkers, the Night King's attack on Winterfell is a great cost to be paid by the Targaryen and Northern forces due to their numbers being heavily decimated to the point that it is questionable for them to resume their war with Cersei and Euron's armies. It is estimated that half of the Northern Force, Unsullied and Dortharki perished in the battle. During the Battle of King's Landing, after losing so much in the wars of late, Daenerys Targaryen succumbs to the infamous "Targaryen Madness" that her father and brother had before her. Daenerys would grow to become a threat to this world, as the Night King was. Ironically, both Daenerys and the Night King died of the same thing; a dagger to the heart.

In the novels, there's no mention of this character. There is only a legend about a traitor known as Night's King. George R.R. Martin stated that the Night's King is a legendary figure who's most likely to be dead. There's also no mention of the Others having a leader at all. The Night King from the show has been added only for the TV version of the events. There are different rumors and theories about possible candidates for a new leader of the Others who will lead them during the Long Night that Never Ends.

A possible candidate for the "next Night's King" is Stannis Baratheon, due to his similarities with Night's King and the fact he took the Nightfort as his seat in the North. Stannis is also said that he will break before he bends. In the House of the Undying, Daenerys Targaryen sees in a vision a blue-eyed king with a red sword, who casts no shadow. The description matches with Stannis, who's said to have deep blue eyes, has the magic red sword called Lightbringer, and created two Shadow Assassins with Melisandre. Voices of the Undying Ones call Daenerys "slayer of lies".

In the book version the situation with the wildlings is more complicated and the events at Hardhome is happening "off-screen" as Jon Snow, who is the POV character of this storyline, stays at Castle Black and sends Cotter Pyke and Tormund there. 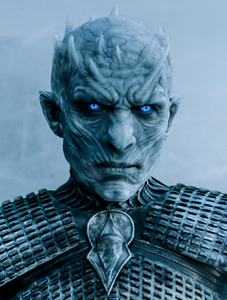 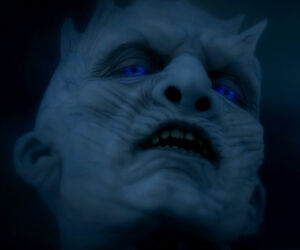 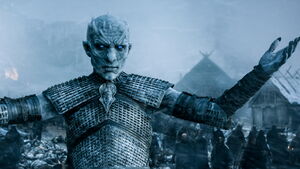 The Night King raising an army of wights. 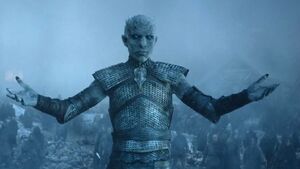 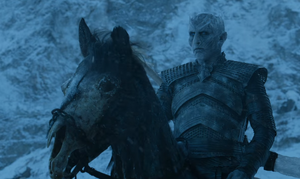 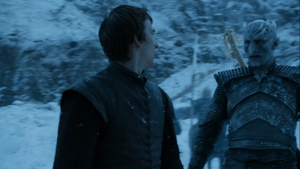 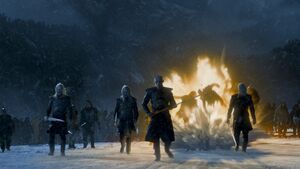 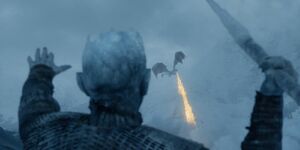 The Night King just before killing Viserion with an ice javelin. 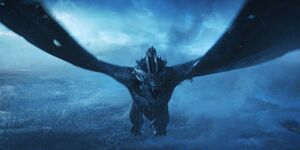 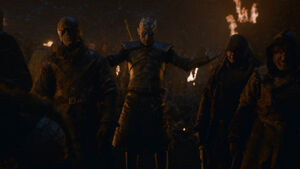 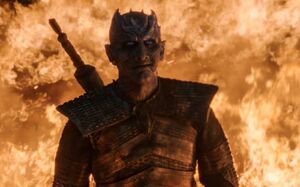 The Night King survives a barrage of dragonfire. 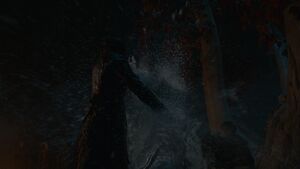 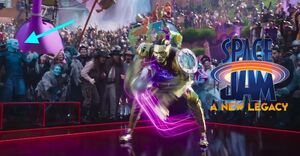 The Night King with other WB characters in Space Jam: A New Legacy. 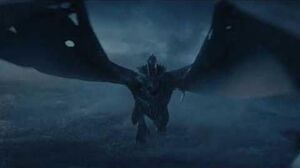 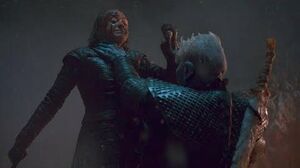