Conquer the city and rid it of the Woo-Foo warriors

Create his own society, erasing the memory of people an the arts of Woo-Foo (both succeeded)
Kill Yin, Yang, Master Yo and cover the three suns to plunge the world into eternal darkness (failed)

Night Master, billed as a "Dark Overlord in an Evil Class All By Himself", is the main antagonist in season one of Jetix cartoon show Yin, Yang, Yo!. Appears to be a demonic sorcerer bat (as such, he hates light) of some description and has a liking for ostentatious outfits.

The Night Master communicates frequently with his servants using a hologram. Is very intelligent, though his plans typically fail because of the stupidity of his minions.

He was voiced by the late David Hemblen.

It is a cross between a Leaf Nosed Bat and a Chinese dragon and is very vulnerable to any kind of light; surely it is the most powerful of the enemies of Yin and Yang and also the most astute and subtle. Defeated in the past by Yo, with a spell convinced the whole world that Woo-Foo was a totally useless martial art; at the end of the first series he is apparently defeated. In fact, in an episode, it turns out that he became a seller of evil weapons, in fact he sells an army of trolls to Eradicus. In the same episode, in the end, Eradicus complains to the Nightmaster's Army, who was defeated by Yin, Yang and Coop, asking to be reimbursed.

His real name is unknown, because Nightmaster is just the title he takes on a being after becoming a dark gentleman.

In the past is responsible for the extinction of Woo Foo and most of the knights Woo Foo (with the exception of Master Yo). He has erased the memory of everyone in the city where Yin and Yang live, so everyone finds Woo-Foo to be idiots, but Master Yo has turned his powerful army into stone, and the only thing that can make the army come back is Power Woo-Foo.

At the beginning of the season the Night Master remained in the shadows while using other villains to fulfill his agenda. In "Dojo, Oh No!", he used Ultimoose to split Yin and Yang up so they couldn't interfere in his plans. After he failed, Ultimoose was punished by having his antlers removed. In "Falling Yin Love", Yuck was revived by the Night Master and was tasked with pretending to be a person named Brett and make Yin infatuated with him. In "A Toy's Story" Yang wins a doll for Yin, but it turns out to be controlled by Zarnot who was working for the Night Master.

In "Shopping Sprawl", the Night Master and Ultimoose trick Yin and Yang into owing them money and having to serve him to pay it off. They find a loophole and manage to return everything they bought. In "Wubble in Paradise", the Night Master acquires Yang's comic book and enters it as a villain named Dr. Scaryface. He sends hawks to attack Yin Yang and Mr. Fluzzlepants, the later of whom was then kidnapped. The Night Master then reveals himself and starts to erase Yang's world. Yang uses his imagination to become a superhero and defeat the Night Master. In "Destination Danger", the Night Master sends two henchmen named Dank and Dire to retrieve the Woo Foo Knuckles of Ultimate Smackdown, but the two failed their mission. In "Pros and Cons" the Night Master holds an evil convention and reveals to everyone attending his master plan. His goal was to block out the three suns and bring eternal darkness to the world and allowing him to be all powerful. At the end of his presentation, he told the other villains to join him or be destroyed. Everyone except Carl and "Death Donkey"(who was Yin and Yang in a donkey costume). The Night Master ordered the villains to kill Yin, Yang, and Carl but when it was revealed that "Death Donkey" was Yin and Yang, he used the Amnesulet to erase their memories of his plan.

In "Voyage to the Center of Yo", the Night Master learns that Master Yo is about to retrieve the Toilet Brush of Illumination and sends Yuck to retrieve it. In the process, the brush breaks in half becoming useless. In "Shadows and Light", Herman failed to use the Geo-Demosoic Device, the Night Master arrived and stole it from him. In "Who Knows What Evil Lurks", the Night Master attempted to destroy Yin and Yang after he was insulted. This lead Yin and Yang to believe that they were being spied on. The two used the Chronologicum to figure out who the spy is. The two view past events of their friends and get no answers(except for Coop who in every scenario ends up meeting the Night Master in some fashion). In the present, the Night Master sends Zarnot to stop them. After he failed, Zarnot was locked in a chest for his failure.

While not appearing as a main antagonist in season 2, the Night Master has a small presence. In "The Pecking Order", Coop returns and tries to warn Yin and Yang about the Night Master's energy. It has escaped and is corrupting anything it touches. Coop absorbs the energy becoming half good and half energy. Finally, in the episode "Shadowcluck", Eradicus bought the Night Master's army from the Night Master while commenting that he looked familiar. At the end of the episode, Eradicus attempted return the army but failed. He then asked if he knew the Night Master from somewhere, to which he replies "Let's say I work in the field of Evil!" 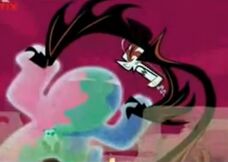 Retrieved from "https://villains.fandom.com/wiki/Night_Master?oldid=4256665"
Community content is available under CC-BY-SA unless otherwise noted.