Founder and Leader of The New World

Enjoying killing those that he deems weaker than himself.

Kill the weak and allow the strong to take control of the world and destroy the modern society.

The Night Slasher is the main antagonist in the 1986 action film Cobra.

He was portrayed by Brian Thompson.

The character is not given a full name, but a television report in the film only identifies him as the Night Slasher.

He is a sadistic serial killer and the leader of a wide group of fascists known as The New World, who believe that only the strongest of people should be allowed to live and take control of the world. To this end, the Night Slasher and his followers go out and kill innocent members of the public who they deem as weak and inferior, using various sharp instruments such as knives and axes and occasionally firearms such as shotguns or revolvers. The Night Slasher is known for crawling through people's windows at night, cutting telephone wires, and killing his victims during their sleep, and he is responsible for at least sixteen murders.

One night, after the Night Slasher has killed another victim, a model and businesswoman named Ingrid Knudsen passes the crime scene when she notices him but manages to drive away before he can catch her. Knowing that she is a witness and that she has also seen his identity, the Night Slasher becomes determined to kill her, leading to Ingrid being placed under the protective care of a police officer named Marion "Cobra" Cobretti. After the Night Slasher makes several unsuccessful attempts on Ingrid's life, Cobretti vows to find him and bring him down. The Night Slasher and the Neo Fascists later track Ingrid to a motel where she and Cobretti are staying, but Cobretti anticipates this move and kills many of the Neo Fascists in a fierce gunfight. Cobretti then escapes with Ingrid to an industrial complex where he kills the few remaining Neo Fascists before confronting the Night Slasher himself. The killer taunts Cobretti, telling him that he cannot murder him and that if he locks him up, he will simply be deemed insane. Cobretti responds by impaling the Night Slasher on a large hook before sending him into a blast furnace, incinerating him. 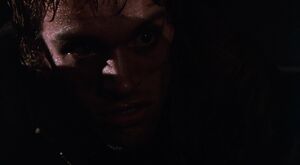 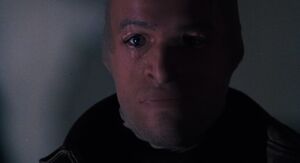 The Night Slasher concealing his identity. 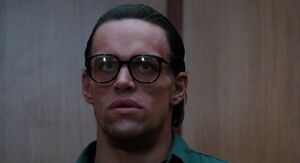 The Night Slasher disguised as a janitor. 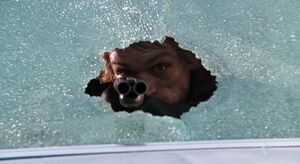 The Night Slasher firing at Marion Cobretti through a broken window. 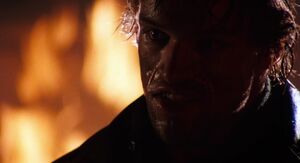 The Night Slasher facing off against Cobretti in an industrial complex. 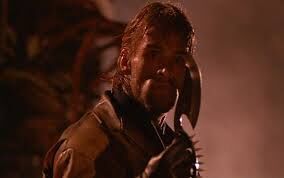 The Night Slasher beginning his fight with Cobretti. 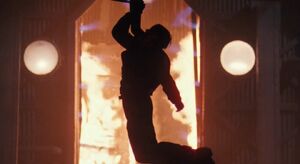 The Night Slasher impaled on a hook and sent into a furnace by Cobretti. 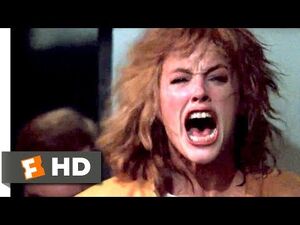 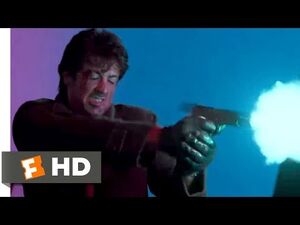 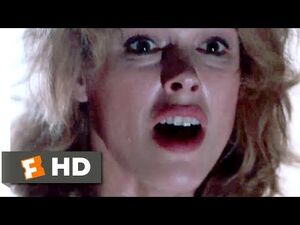 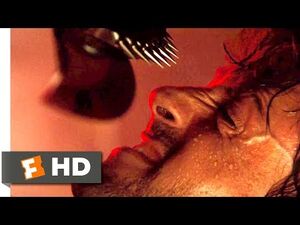