Leader of the Squadron Supreme

Conquer the earth along with his team mates (succeeded, then failed)

Rid earth of crime, corruption, and war.
Kill the Avengers.

Nighthawk is the main antagonist of season 2 after Ultron and Thanos from the Marvel Comics television series Avengers Assemble and is the leader of Hyperion's team of superheroes the Squadron Supreme.

Nighthawk was an alien superhero from a distant world, where he was a member of a team of heroes similar to the Avengers called the Squadron Supreme. The people of their world feared their power and turned against them. As a final solution, Hyperion destroys his home planet along with his team on it, escaping into space on his Citadel.

Nighthawk debuts under the guise of Kyle Richmond, director of the interstellar operations of S.H.I.E.L.D. Nighthawk secretly gets into the S.H.I.E.L.D. in order to obtain the contingency plans of the Avengers to take them down. When Nighthawk deals with all of the Avengers except for Falcon, whom he takes hostage and tells him about Hyperion's citadel and its full capabilities along with other information. such as Hyperion's team of corrupt superheroes. the "Squadron Supreme" surviving theand that when Hyperion reawakened the citadel and it sent out a signal to the other Squadron Supreme heading towards earth. While in the citadel Nighthawk activates an incoming laser from the citadel heading towards New York City while broadcasting a message to surrender the earth to him and the Squadron Supreme and reveals to Falcon by unmasking himself that Kyle Richmond was just an alias to deceive both S.H.I.E.L.D. and the Avengers but while Nighthawk with him unnoticed, Falcon frees himself and battles Nighthawk. While Falcon managed to temporarily defeat Nighthawk but in an attempt to stop the laser from reaching New York City, Nighthawk gets up and tells him that there is no way and defeats Falcon with ease and nearly kills him in the process but right in the nick of the time the Avengers show up after getting out of their traps. While Hulk and Thor work to shut down the citadel, the others fought Nighthawk where they managed to defeat him and remand him to S.H.I.E.L.D. custody. Outside of Nighthawk's cell, Nick Fury mocks the idea of Nighthawk being one step ahead where Nighthawk states that he's always one step ahead. This is proven right when Hyperion arrives and frees Nighthawk in front of Nick Fury. Nighthawk and Hyperion then leave to get their group together.

Nighthawk later returns along with his newly reformed team where in an alternate reality the Squadron Supreme are branded heroes thanks to the reality gem that Dr. Spectrum currently possses, due to a spike in energy, Iron Man sees the real reality and manages to convince his team to come together. However Spectrum has created a machine that will give him complete control over reality, and plans to alter history so the Avengers were never born. Captain is able to get a hold of the stone and revert reality back to normal. The Squadron leaves with Nighthawk activating charges placed at the base of Avengers tower. The Avengers manage to prevent the structure from falling onto New York in time for J.A.R.V.I.S. to activate the repair systems.

Nighthawk later appears at the end of the episode "Midgard Crisis" in which he meets her team mate Zarda at his secret lair located in the woods and Zarda tells him she was wrong about swaying a member of the Avengers to their side, Thor in particular. 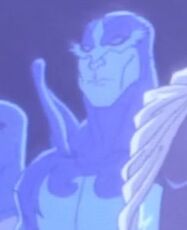 Nighthawk as he originally appeared in Season 1, as a hologram.