Nightmare is a creature infected by the X Parasites and is the eighth boss Samus faces aboard the Biologic Space Laboratories research station in Metroid Fusion. It also appears as the seventh boss in Metroid: Other M.

Samus first encountered Nightmare in Metroid: Other M while on her journey to Sector Zero on the Bottle Ship. The creature fights Samus once when she tries to enter Sector Zero and again after she activates her Gravity Suit in which Nightmare's organic face is visible. After it is defeated, its corpse rests on the ground until the post-credits sequence; this may imply that the Federation moved it to the Biologic Space Laboratories research station for its appearance in Metroid Fusion.

In Fusion, Nightmare is described as a bio-mechanical organism designed for military applications that "possesses uncommon power and can manipulate gravity". When Samus leaves Sector 5 for the first time, she catches glimpses of Nightmare flying around behind the large windows (possibly its containment tank), causing the entire room to shake violently. It also appears when she is entering and leaving Sector 5 while obtaining the Power Bombs, though it is never mentioned by Adam after any of these encounters.

After Samus obtains the Plasma Beam and restores power to the BSL research station after defeating Nettori, Adam detects an explosion in Sector 5 and tells Samus to investigate. When she arrives, Samus finds most of the sector in ruins. Exploring further, she eventually finds the X-infected Nightmare in a uniquely mechanized room. It is interesting to note that the Nightmare appears damaged. The damage adds to its nightmarish appearance, making it look decomposed and rotting.

In Fusion, Nightmare has three phases, not including its Core-X form. It remains mostly the same as in Other M.

During this phase, Nightmare will stay in front of Samus and shoot bursts of lasers from its arms at regular intervals. These bursts can be difficult for Samus to jump over as it shoots them in a spread. Its weak point is the Gravity Manipulator - the glowing purple protrusion connected to its central body. Normally, its arms will be blocking it, so Samus must lure the Nightmare up by jumping high, then coming down and getting a shot or two at it using the charged Plasma Beam or an Ice Missile. Once it has been sufficiently damaged, the Nightmare enters its second phase.

The Nightmare's Gravity Manipulator starts running, lowering the height of Samus' jumps and the distance which her missiles may travel, forcing Samus to rely on her charged Plasma beam. The Nightmare will begin to move slowly back and forth; its eye sockets also begin to emit a slimy, green substance. After taking sufficient damage, the Gravity Manipulator is destroyed, returning gravity to normal. Nightmare's face mask then explodes, revealing its true face, upon which it enters its third and final phase.

The Nightmare will begin to move erratically around the room, becoming difficult to dodge. Its exposed face functions as its weak spot. Samus must utilize the ladder and the Space Jump to effectively avoid attacks and aim counterattacks. When the Nightmare (along with its Core-X) is defeated, Samus's Gravity Suit is restored.

Nightmare floats in the middle of the room firing energy blasts at Samus, and will sometimes spin in one place, firing energy lasers, and may even try to run through the platform to ram Samus. Eventually, Nightmare will manipulate the gravity and slow Samus down. This will allow it to attack Samus more easily. But by blasting the Gravity Manipulator with the Ice Beam, Samus can freeze it and return gravity back to normal, and she will be able to fire at its face. This will destroy the plating, and cause it to fall to the bottom of the room. Believing Nightmare to be dead, Samus ventures off to Sector Zero.

As Samus leaves the area after inspecting Sector Zero, Nightmare's body suddenly rises up and attacks her in its unmasked form. It also gained back all its health. Nightmare has the same attacks as before, but will now fire a laser from its face and also shoot large orbs which suck in all of Samus's shots, including the Power Beam. Occasionally, the unmasked Nightmare will fall to the ground, only to rise up again. When defeated, it will explode, its arms and tail separated from the body as it lies on the ground, officially defeated.

Nightmare appears as a Trophy, based on its unmasked from Other M.

Nightmare appears as an ace class attack-type primary spirit, obtainable by enhancing the X Parasite spirit at level 99. When equipped, Nightmare grants the ability "Lifesteal", which steals some of the opponent's health to heal the user whenever they strike an enemy. 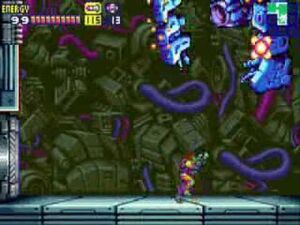 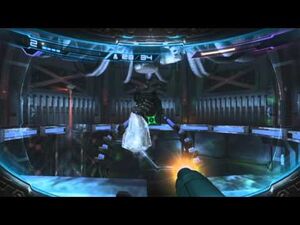 Metroid- Other M - The Nightmare -HD-