He is voiced by Matthew Curtis, who also voiced Music Man and Burntrap.

Nightmare BB returns in Ultimate Custom Night as one of the selectable characters. When active, he will sit in the office slumped over, and might stand up the next time the player lowers their monitor. If he is standing up, then the player must shine the flashlight on him to make him sit down. Shining the flashlight on him when he is sitting down or putting up the monitor or failing to reset the ventilation when he is standing up will result in Nightmare BB jumpscaring the player, causing a game over.

Nightmare Balloon Boy returns in the second Dark Rooms level in FNaF VR: Help Wanted. He will sneak around in the dark when the player's focus isn't on him in an attempt to kill the player. The player must shine the flashlight on Nightmare Balloon Boy when he is sitting on the red X to successfully complete the game. Successfully completing his game will unlock Plushbaby's game.

Nightmare Balloon Boy returns as a character in FNaF World. He is unlocked by beating the minigame Foxy Fighters and getting an A rank.

Nightmare Balloon Boy appears similar to the original BB, except with a more nightmarish design. This includes large teeth inside of his large mouth (similar to Nightmare Chica), long claw-like fingers, and more sinister looking eyes. He has a red nose and cheeks instead of orange ones. He also has a red and purple striped hat and shirt, instead of Balloon Boy's red and blue stripes. 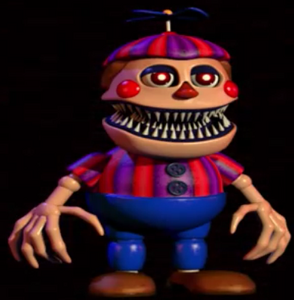 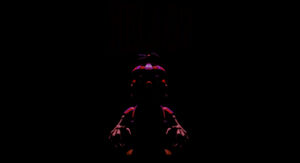 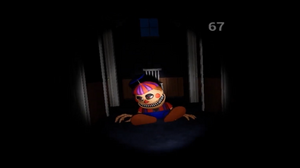 Nightmare BB having appeared in a remake of his "Fun with Balloon Boy" Minigame in FNaF VR: Help Wanted as a part of "Dark Rooms".