Roaming around the house.

Nightmare Bonnie's form has been massively changed. He seems completely damaged like his appearance in Five Nights at Freddy's 2, with a more vicious look. He has a purple glow on his right eye. His jaw is huge and filled with many sharp teeth. His finger also ends with sharp claws. Additionally, he has wiry whiskers on his snout, giving him more resemblance to an actual rabbit.

His role parallels that of Nightmare Chica, coming in from the west hall of the house. Unlike Chica, however, upon entering the room to attack, he himself attacks the protagonist. He is also the more frequent attacker out of the two. The player has to hold the left door shut to prevent him from getting in. If the player flashes the light at him when he is standing right outside the door, he will attack him, and if he turns his back on the door to look at the bed, he will enter the room and attack. The only way to tell he is at the door is to listen for his breathing. Holding the door will cause him to walk away, being unable to enter.

Nightmare Bonnie appears in the game Ultimate Custom Night. He will appear at a random time in the Right Hall and the only way to defend against him is to purchase a Bonnie Plushie from the Prize Corner using Faz-Coins. The higher his customizable A.I is, the more expensive the plushie is.

Nightmare Bonnie appears as an enemy in the minigame Hallway Crawl. He can come out of any left door and he will kill the player if he's right before him.

Nightmare Bonnie has been confirmed to be added to Special Delivery in 2022, along with Lefty. 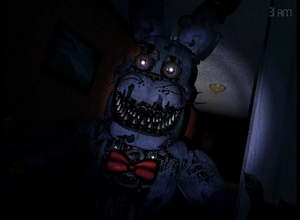 Nightmare Bonnie, moments before attacking the player in the trailer. 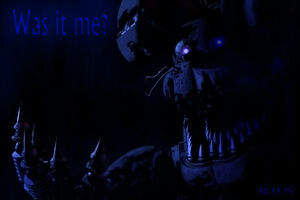 Nightmare Bonnie jumpscaring the protagonist at the Left Hall.

Nightmare Bonnie jumpscaring the protagonist in the bedroom. 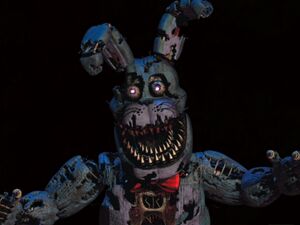 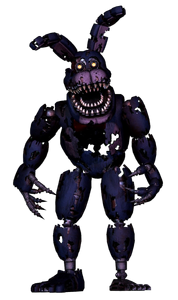 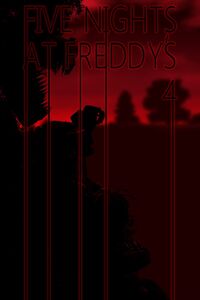 Nightmare Bonnie and Nightmare Fredbear on the XBox cover for Five Nights at Freddy's 4.