Villains Wiki
Register
Don't have an account?
Sign In
Advertisement
in: Homicidal, Thought-Forms, Five Nights at Freddy's Villains,
and 21 more

Kill the protagonist in his nightmare. (failed)

She is a nightmarish incarnation of Chica the Chicken and a possible representation one of the Big Brother's Friends.

Nightmare Chica's role parallels that of Nightmare Bonnie, coming from the East Hall of the house.

Unlike Bonnie however, she sends another animatronic to kill the player when their back is turned, her Nightmare Cupcake. It is unknown whether or not the cupcake is sentient.

She is the slower out of her and Bonnie, and tends to wander into the kitchen, banging around dishes for unknown reasons. The player has to hold the right door shut to prevent her from getting in, her presence at the door noticable by her loud breathing. Like Bonnie, flashing the light at her while she's at the door will cause her to attack and kill the player immediately.

In the minigame after surviving night 5, one of the Big Brother's friends who help him torment the Crying Child at his own birthday, which ends in his accidental death, is seen wearing a Chica mask to conceal his identity. It is likely that Nightmare Chica is a representation of him.

Nightmare Chica is a secret animatronic that can be summoned by Dee Dee. When activated, she begins to close her jaws on the player. To ward her off, the player needs to turn on the AC, lest Nightmare Chica kill them.

Nightmare Chica appears alongside the rest of the Nightmare animatronics (barring Nightmare Fredbear and Nightmare) in the "Hallway Crawl" level as part of the Curse of Dreadbear DLC. She will peek into the room from the doors on the right side of the hallway and kill the player if they happen to be in front of her, then retreat behind the door shortly after.

Nightmare Chica is an insane, twisted and sadistic nightmarish form with the cruel goal to kill the protagonist within his dreams. She is very cunning and often relies on her cupcake, which is far more discreet than rushing on the door. 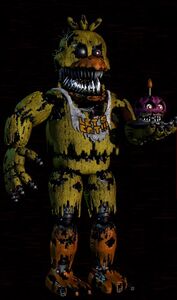 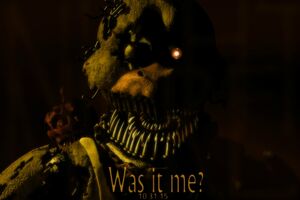 Nightmare Chica jumpscaring the player at the right hallway. 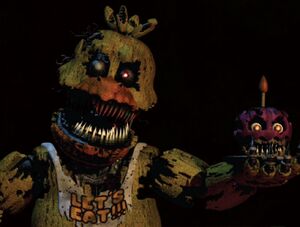 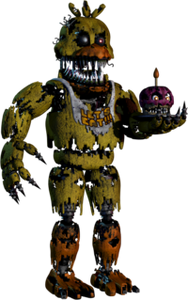