Nightmare Foxy appears as a plushie in his harmless form, and as a rotten, damaging and frightening animatronic in his actual form.

His actual form is a tall reddish-orange anthropomorphic fox with a hook for his right hand, which is also used to attack the protagonist. He has a big mouth with two sets of sharp teeth and two glowing, sinister orange eyes. His endoskeleton is exposed to the feet and legs, revealing rows of spikes that formerly serve as toes.

As a nightmare, Foxy is much more vicious, dangerous and faster than his corporeal counterpart, making him a brutal killer.

Nightmare Foxy will commonly become active Night 2 onwards, although he may rarely become active on Night 1. He starts out at the back of the house and can try to enter the bedroom through either hallway. Checking the wrong hallway while he is close to the bedroom will allow him to run into the room and creep inside the closet. He then hides in the closet and will slowly reveal himself.

Much like other games, neglecting to check on Nightmare Foxy will result in a game over. Going to the closet view, Foxy will either appear as a head or his complete body. If Nightmare Foxy is about to attack the player, he will chomp his jaws up and down and scream.

The only way to prevent his attack is the close the closet door. If successful, he will turn back into a foxy plush. Also, on any of the nights, even the first night, if you click the Freddy plush on your bed 20+ times or hold the flashlight on the bed for 15 seconds, Nightmare Foxy will come out to kill the player.

In the "Hallway Crawl" minigame from the Curse of Dreadbear DLC of Five Nights at Freddy's VR: Help Wanted, he will randomly appear in front of the player, and, if he caught him moving when there are thunders outside, he will kill the player. 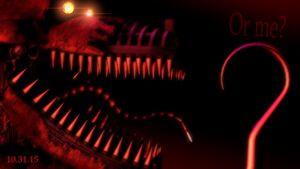 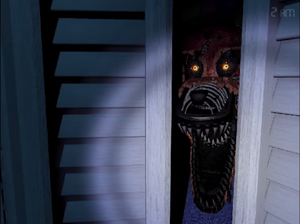 Nightmare Foxy, as depicted in the official trailer for Five Nights at Freddy's 4. 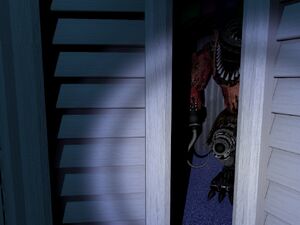 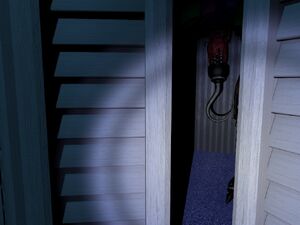 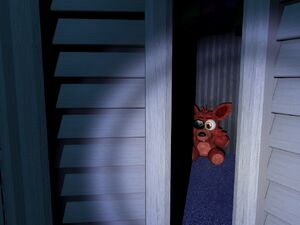