Tormenting the protagonist with its Freddles.

He is voiced by Tim Simmons.

Freddy's minions, officially called Freddles, begin appearing on the protagonist's bed whenever the child do not longer check the bed.

The player must prevent the Freddles from staying on the bed by flashing the light at them, or they summon Nightmare Freddy, who jumps out from under the bed, and instantly kills the player.

Nightmare Freddy appears in Ultimate Custom Night. He will be summoned to the Office if too many Freddles appear in there. Shine the flashlight on the Freddles to scare them off and prevent Nightmare Freddy from appearing.

Nightmare Freddy appears in the Hallway Crawl level. He will start chasing the player from behind him, and there's no way he can be stopped, so the only way to prevent his attack is keep going forward fast enough to not be reached and only stopping when absolutely necessary. 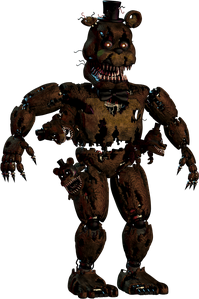 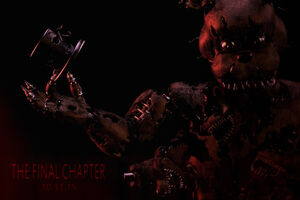 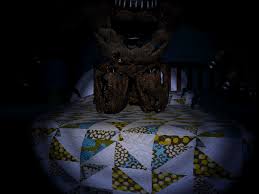 The very first frame of one of Nightmare Freddy's jumpscares.

Nightmare Freddy attacking the protagonist on the bed.

Nightmare Freddy attacking the protagonist in the bedroom.