Ruler of the Nightmare Land

The Nightmare King is the main antagonist of the 1989 Japanese-American animated adventure fantasy film Little Nemo: Adventures in Slumberland. He is the tyrannical and authoritative ruler of the dreaded Nightmare Land.

The origins and history of the Nightmare King are unknown, but he is apparently the embodiment of nightmares, he rules over Nightmare Land, a dark world which represents all the fear and darkness of the world's nightmares. At some point in the past, he was imprisoned beneath Slumberland by his enemy, King Morpheus, the king of Slumberland. He was locked behind a giant door which all residents of Slumberland were forbidden to open lest the evil king be set free again.

During the movie, Morpheus summons a young boy named Nemo to Slumberland to be his heir and playmate to his lonely daughter, Princess Camille. Nemo is a boy who suffers from constant nightmares and while his parents say the reason is because of his habit of sneaking pies late at night, it is strongly hinted several times that the Nightmare King may, in fact, be the one responsible for his endless nightmares.

When Nemo and his pet flying squirrel, Icarus are brought to Slumberland, the Nightmare King is released after Flip tempted Nemo into unlocking the door that Morpheus warned him not to open using a royal golden key. Nemo rushes back to Morpheus' palace in time for his coronation ceremony, where Nemo is handed the royal scepter, the only thing capable of defending Slumberland in the event of the Nightmare King's return. In the middle of a dance session between Morpheus and Professor Genius, the Nightmare King reaches the castle in the form of a mass of black goo and steals Morpheus away. As the party goers search for a scapegoat, Flip and Nemo reveal each other to be responsible for the Nightmare King's escape.

Nemo awakens in his home, which floods with seawater and ejects him into the ocean. Genius discovers Nemo and tells him not to blame himself for all that has happened and that Flip is responsible. When the two return to Slumberland, Flip reveals that he has a map to Nightmare Land, where Morpheus is currently being held. Nemo, Icarus, Camille, Genius, and Flip set off in a tugboat in search of Morpheus.

They are soon sucked into a whirlpool and find themselves in the monster-infested Nightmare Land. The group comes across a group of shape-shifting goblins who wish to aid in the quest to find Morpheus. The Nightmare King sends a flock of giant bats creatures to seize the rescue party. Nemo attempts to use the scepter but the attack is too vicious and Flip, the Professor, and sadly Camille are all captured and taken away. Nemo is attack by all the remaining bats but once again awakens back in his bed. The goblins appear in Nemo's room and the group travels together to the Nightmare Castle within the Nightmare Land by flying through a hole in the sky called the "Gate of Wind".

At his castle, the Nightmare King is informed that Nemo has been terminated, but his giant stingray soon informs him that Nemo is in the castle with the scepter. Enraged, the Nightmare King absorbs his army due to their failure. He then sucks Nemo and his friends into his lair where he demands possession of the scepter.  When Nemo fails to reply, the King reveals the Professor, Princess Camille, and Flip whom he has imprisoned in giant reliquaries and begins to taunt the boy. When even this fails, he tops it off by imprisoning King Morpheus in a reliquary of his own right before Nemo's eyes.

Nemo tries to save him but the Nightmare King has his giant stingray try to kill him but Nemo soon destroys it with the scepter. He again asks Nemo to give him the scepter because, after all, Nemo cannot even remember the words necessary to use it. Nemo refuses and valiantly uses the scepter to fight off the Nightmare King by destroying his left hand. Now enraged, the Nightmare King tries to absorb Nemo and his friends and finish them for good. In a last desperate effort, Nemo just barely manages to recite the full incantation to the scepter unleashing its full power to destroy the Nightmare King once and for all, albeit at the cost of his own life, ending his evil reign along with Nemo's own nightmares.

The Nightmare King appears as the primary antagonist and final boss of both the 1990 Nintendo video game Little Nemo: Dream Master and the 1990 Capcom arcade game Nemo. In both games, he sends both his army of fiendish denizens of the Nightmare Kingdom and evil boss monsters to invade Sumberland and to destroy Nemo but Nemo took on and beaten his minions and than defeated the Nightmare King himself. 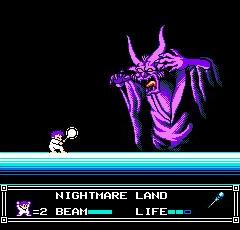 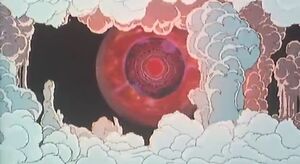 The Nightmare King appears in the 1990 arcade game Nemo. 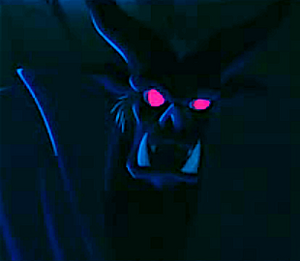 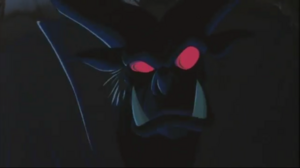 The first appearance of The Nightmare King. 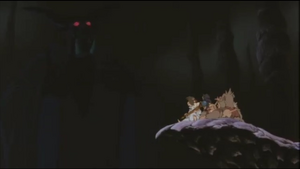 The Nightmare King speaks to Nemo. 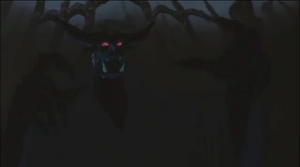