Nightmare Mangle is the nightmarish version of Mangle and a major antagonist in the Five Nights at Freddy's franchise, serving as the secondary antagonist of Five Night at Freddy's 4: Halloween Edition, and a major antagonist in Ultimate Custom Night. It is one of the few new Nightmare animatronics alongside Nightmare Balloon Boy and Nightmarionne. It is a nightmarish and more vicious version of Mangle. Nightmare Mangle is responsible for replacing Nightmare Foxy in the Halloween Edition, and thus shares the same behavior.

Overall, it appears to resemble the original Mangle, except far more twisted and tattered. It possesses all of the original parts from Mangle, such as the plastic head, endoskeleton head, and various mechanical parts, but appears far more sinister and twisted, though not as much as Nightmare Balloon Boy. Its head shape looks similar to Nightmare Foxy's, while the second endoskeleton head closely resembles a skull. Nightmare Mangle also has 3 endoskeleton legs.

Nightmare Mangle appears in the game Ultimate Custom Night. It will appear at a random time in the Right Hall and the only way to defend against it is to purchase a Mangle Plushie from the Prize Corner using Faz-Coins. 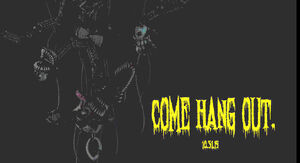 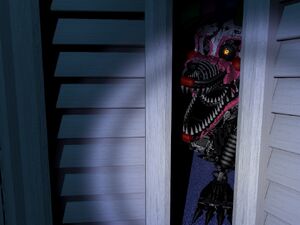 Mangle staring out of the closet. 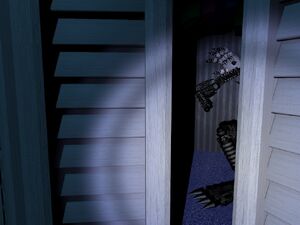 A shot of Mangle's arm and leg. 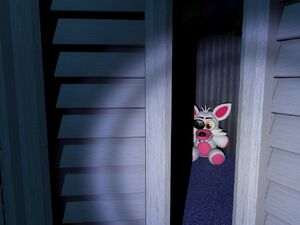 A plush doll of Mangle/Funtime Foxy.