The Nightmare Phenomenon (also called "Nightmare Phenomena") is a phenomenon of strange viruses called Nightmares (also called Nightmare Viruses), named after it, that can corrupt not only machines but nature as well, creating weird distortions in the environment. They were created by Gate from a piece of Zero that contained his DNA. Gate intended on using this phenomenon to destroy all lower Reploids to create a utopia with only the strongest ones.

The Nightmare takes the form of an artificial entity with a small torso and a head with a red eye, and arms who resemble a DNA helix. It will seek any Reploids nearby and possess them. When destroyed, they leave behind a blue orb called Nightmare Soul, which will make the Nightmare resurrect, if not collected. When affecting an environment, it will make strange objects appear, as well as calling forth unnatural phenomena such as blizzards and acid rains. 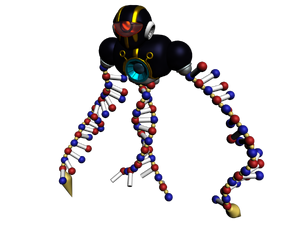