The Nightmare Terminator is a one-time villain in the Sarah Connor Chronicles TV show.

Sarah Connor picks her son, John, up from school. They are captured by the police. Sarah and John are locked in separate police vehicles and driven away. Suddenly, an unidentified man appears in front of both vehicles. He uses a pump shotgun to kill the drivers. He then draws a pair of twin MP5s to kill the remaining police officers. Sarah and John manage to escape from their vehicles. John attempts to run away from the scene but he is shot by the nameless man. Sarah rushes to John but he is already is dead.

The man points a Desert Eagle directly at her. She cries in horror and sadness. "Do it! Do it, kill me! Nothing matters anymore. Kill me!" He responds. "You're right. Nothing matters anymore. Only the boy. The future is ours. And it begins... now." In the background, a nuclear bomb detonates and darkens the sky. The blast burns the man's skin, revealing him to be a Terminator robot. He grabs Sarah's throat and strangles her. She wakes up and realizes the whole event was a nightmare. 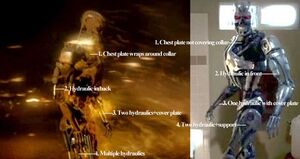 Retrieved from "https://villains.fandom.com/wiki/Nightmare_Terminator?oldid=3777945"
Community content is available under CC-BY-SA unless otherwise noted.