Little Engine That Could

Keep the dream tunnel closed and deliver nothing but nightmares (failed).

The Nightmare Train is the main antagonist of the 2011 computer-animated film adaptation of Watty Piper's 1930 children's picture book The Little Engine That Could.

He was voiced by Ray Porter, who also played Count Grisham in The Scarecrow, Dale "The Whale" Biederbeck in Monk, Hestler Jones in Justified and Darkseid in Zack Snyder's Justice League.

Near the top of the mountain containing old tracks that connect Dreamland to the real world, Little Engine is immobilized when her water tank goes empty. A black train appears and offers to take the toys and Richard (the real boy) to the real world on Little Engine's behalf, which she accepts. However, once they were in his boxcar, the black locomotive reveals his true form as the Nightmare Train, having tricked Little Engine. He reveals his intentions to keep Richard and the toys in Dreamland to keep the tunnel closed and halt the delivery of good dreams, so the only dreams that could be delivered were his nightmares. Little Engine demands him to let them go, only for the Nightmare Train to push her off the tracks, leaving her derailed. Fortunately, Little Engine refills her water tank from a nearby water tower and jumps a cliff to land on a stretch of tracks below to chase after the Nightmare Train and rescue Richard and the toys.

During the end credits, the Nightmare Train is shown at the bottom of a ravine, probably having jumped the tracks because of Little Engine and her trick. His fate afterwards is unknown.

As his name implies, the Nightmare Train is a very frightening and malevolent engine that has a strong desire to deliver nightmares to anyone. He exhibits an extremely manipulative and deceitful personality, as he deceives Little Engine into giving him the toys and Richard. He is also shown to be outwitted by Little Engine, as he takes a wrong track.

The Nightmare Train is a large black anthropomorphic 0-6-4 tenderless steam locomotive with three smokestacks and yellow creepy eyes with red pupils, pulling a train of three old rickety boxcars and finally one old rickety caboose. As soon as he had the toys and the real boy in his possession, his appearance changes into a more frightening form with his cowcatcher forming his mouth and other bestial features like his whistle and pistons. Even though he has a whistle, he has a diesel horn. 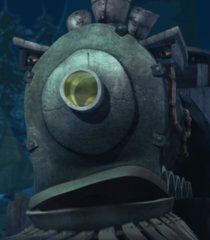 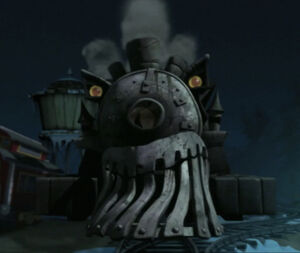 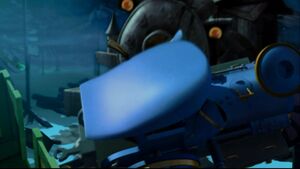 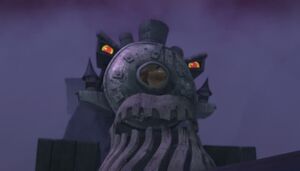 "You haven't the sense to give up when you should!" 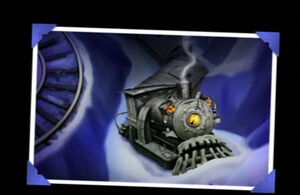