All the abilities of Nightmare

It is the nightmare counterpart of the Puppet and one of the few new Nightmare animatronics that were introduced in the DLC, alongside Nightmare Balloon Boy and Nightmare Mangle. Nightmarionne replaces Nightmare in the Halloween Edition, and thus shares the same role and behavior.

He is voiced by Aleks Le, who also voices Amy Kirio.

Nightmarionne generally appears to be very similar to the Puppet. The most significant change in design is a large smile full of sharp-looking teeth as well as being much darker in color to the point of being colorless. Nightmarionne sports longer, even lankier limbs than its Five Nights at Freddy's 2 counterpart and a torso with a set of protruding ribs. Its fingers are longer and thinner than the Puppet's.

Nightmarionne behaves exactly like Nightmare Fredbear and Nightmare and can attack from the Bed, Closet, Left Hall, and Right Hall.

Nightmarionne returns as a customizable enemy in the game Ultimate Custom Night. In this game, Nightmarionne will slowly start to appear the longer the player's mouse cursor is on them. If Nightmarionne fully appears, it will jumpscare the player, resulting in a game over. Nightmarionne appears overtime faster the higher it's A.I is set to.

Nightmarionne appears in the second Night Terrors level. He may appear in the hallways, where the door must be shut to prevent his attack or using the flashlight under the bed, in the closet, or in the ceiling, (where she will move her fingers like they're tentacles) to make him go away. 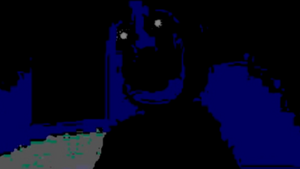 Nightmarionne's visible in a brightened promo picture on Scott's website. 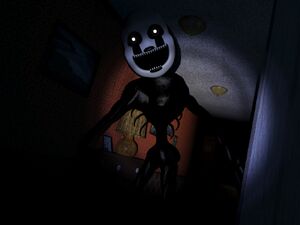 Nightmarionne in the left hallway. 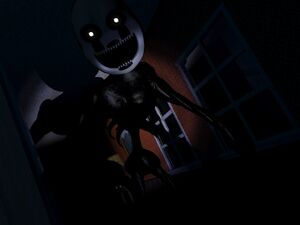 Nightmarionne in the right hallway. 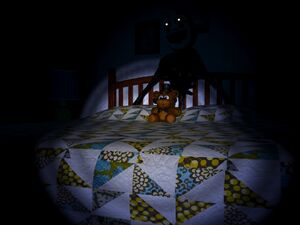 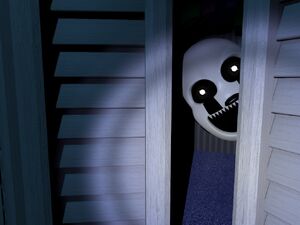 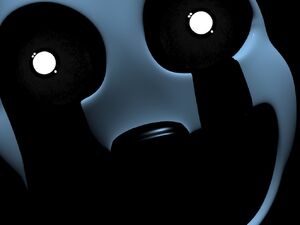 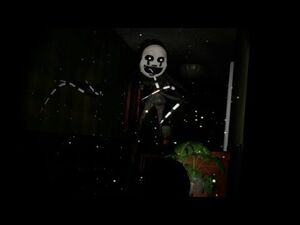 Nightmarionne in Five Nights at Freddy's VR: Help Wanted in his level of "Night Terrors".