Nightshade is a master thief and one of the trappable villains in Skylanders: Trap Team. A Dark Trap is required to trap him.

Nightshade snuck into the high security Midnight Museum to steal the Dark Eye of Tomorrow in order to steal everything in Skylands. The Skylanders attempted to retrieve the Dark Eye before it could fall into the wrong hands, but Nightshade beat them to it and snatched the artifact before making his escape. After the Skylanders defeated the security forces of the museum, Nightshade was cornered by the heroes and engaged them in a fight. During the battle, the Doom Raider used the shadows of the pillars to inflict damage to the Skylanders and created shadow clones of himself to confuse and harm them.

Despite this advantage, Nightshade was defeated and accepted capture with dignity. 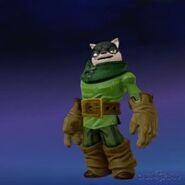 Add a photo to this gallery
Retrieved from "https://villains.fandom.com/wiki/Nightshade?oldid=1291075"
Community content is available under CC-BY-SA unless otherwise noted.