The Nihilanth is the main antagonist and final boss of the FPS Thriller Half-Life, making up the entire 18th chapter, where he resides in a large ambient chamber. He is the all-mighty and powerful leader of the Xenian Armada, and second hand contributor to the Black Mesa incident. The Nihilanth's true motives are unclear, all that is known is his grudge towards the human race, and his imprisoners (who are hinted to be the Combine).

The Nihilanth is a large extraterrestrial creature over 20 feet tall, with three arms and a massive cranium. He is shown to have many scars and amputations on his body, depicting the outcome of an unknown event prior to the games storyline. The Nihilanth's battle wounds consist of a large abdominal scar, and complete loss of his legs or other mobile appendages, his legs are thereby substituted by a mechanical levitation device, allowing him to hover instead. The Nilhilanths powers and knowledge are far beyond comprehension, giving him a strong upperhand over the entire Black Mesa incident, one which he had no contribution to the start of but a major one to the ending. Nihilanth resides in a large chamber in the outer dimension of Xen, where he acts as ruler over the enslaved Vortigaunt race, one which is enslaved not by him, but by a higher power that held him as a slave as well.

Role in Half life

The Nihilanth is shown to have a deep rooted desire for revenge, and a concentrated hatred for humanity. He goes so far as to call the humans thieves for stealing crystals, and numerous specimens from the different species that inhabit Xen. It has also been established that he and his kind fought the evil and powerful alien empire known as the Combine, resulting in the extinction of his kind, save for himself, causing him and his race to flee to the border-world of Xen. It is implied that he created an ecosystem for the other surviving creatures allowing them to flourish. It can also be assumed that the Nihilanth saw the humans as no different than the Combine after they trespassed into his world and essentially abducted many of the creatures he had sought to protect, therefore making his invasion of Black Mesa as an act vengeance and survival. 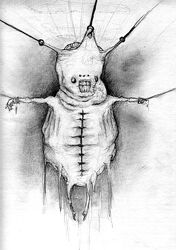 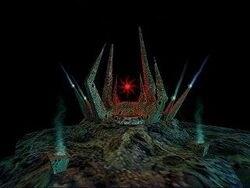 Teleporter entrance to the Nihilanth's chamber. 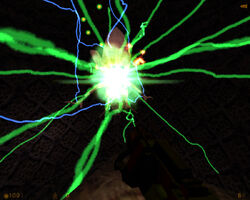 Nihilanth's death.
Add a photo to this gallery

Retrieved from "https://villains.fandom.com/wiki/Nihilanth?oldid=3245662"
Community content is available under CC-BY-SA unless otherwise noted.