He is a Major General of the Soviet Army and was responsible for the death of Dimitri Petrenko and other Soviet soldiers during the creation of Project Nova. He later conspired with Lev Kravchenko and Friedrich Steiner to weaponize Nova 6 and unleash it upon the United States. To do this, he had many Americans brainwashed as sleeper agents, one of them being Alex Mason.

He is the archenemy of both Alex Mason and Viktor Reznov.

He was voiced by Eamon Hunt.

Dragovich was born on August 10, 1914 in the Russian city of Tsaritstyan (modern day Volgograd) during the final years of the Russian Empire. Nothing else is known about his early life beyond him eventually witnessing the Russian Revolution, the formation of the Soviet Union, and enlistment in the Soviet Armed Forces.

Massacre at the Red Square

During the infamous Battle of Stalingrad in 1942, Dragovich had promised Viktor Reznov that he and his men would be supplied with reinforcements during their defensive battle against the German Army in the Red Square. The promise was never kept though, and Dragovich ended up abandoning Reznov and his men to be slaughtered by the Nazis in the Red Square of Stalingrad. Stalingrad would eventually be liberated by the Soviets, but Reznov knew not to trust Dragovich after he abandoned the latter and his men, considering him to be an "opportunist" and "manipulator".

In 1945, during the end of World War II, Dragovich and Kravchenko lead a Soviet expeditionary force to the Arctic Circle, where Waffen-SS Officer and Nazi Scientist, Friedrich Steiner, was at. He found this information after interrogating various German POWs, eventually finding out about the location of German V-2 rockets hidden within the German base at the arctic circle. He and Kravchenko eventually volunteered for the Soviet operation and were eventually chosen to lead Operation Olympus: an assault of the German Antarctic outpost and capture Steiner and the V-2 rockets. The operation was a success and Steiner was eventually found and taken into Soviet custody while the rest of his men were either killed or later executed by Kravchenko and other Soviet officers. Dragovich and his men eventually followed Steiner into the ruins of a destroyed German boat where the rockets were at as well as Nova 6, the biological gas that the rockets were meant to carry.

He found out from Steiner that the V-2 were to be long-ranged rockets meant to target the Soviet and American cities of Washington D.C. and Moscow, but was never followed through due to the German defeat at the Battle of Berlin. Explosives were originally going to be planted to destroy the evidence, but the mission had failed and both the gas and rockets were left to freeze in the harsh arctic winter. The lab was found and Dragovich was satisfied, but he needed to test out the gas and so, he had Reznov and his men chosen to be test subjects and had half of them, including Dimitri, killed and saw the effects of Nova 6 at plain sight. Before Reznov could've been killed however, British Commandos came in and raided the cruiser forcing Dragovich to retreat and escape the arctic circle. The shipment was destroyed by Reznov, but Dragovich managed to escape and had the needed plans and resources to recreate it. 14 years later in 1959, Dragovich received approval from the Soviet Communist Party to rebuild the rocket and the gas to use in the event that World War III were to break out.

Over the next 16 years, Dragovich climbed through the ranks of the Soviet military, eventually making it to the position of Major General and had the entire Soviet military arsenal at his disposal becoming one of the most powerful men in the entire Soviet Union. Across the sea in Cuba, Dragovich made an alliance with Cuban communist revolutionary and president Fidel Castro and secured and alliance with the new communist Cuban government to allow him to operate within Cuba's borders.

In 1961 during the Bay of Pigs Invasion, a CIA assassination team was sent in to kill Castro and they supposedly succeeded, but it was all a trap and one of the operatives, Alex Mason was eventually captured and delivered to Dragovich as a gift from Castro. He later had Mason sent over to Russia as a prisoner in Vorkuta. Despite the effort, there was a little success, and so Dragovich and the others decided to leave Mason to rot in Vorkuta, but Reznov sneaked in to successfully program Mason to kill the three of them as part of his revenge scheme.

One month after Mason managed to escape from Vorkuta, he was sent back to Russia to assassinate Dragovich and they found him overseeing the launch of two Soyuz rockets as part of the Soviet Space Program, in which he took Kravchenko in as part of the project along with an entire team of World War II German scientists to work on the project known as the Ascension Group. Operation 40 had dispatched an undercover agent known as Grigori Weaver to infiltrate their ranks and aid the X-Ray and Whiskey Teams.

Weaver, however, was found out and captured before the other teams could arrive. Dragovich told Kravchenko to "take care of him" and the latter ended up stabbing Weaver in the eye after his team had arrived to the site. X-Ray heads in and rescues Weaver who still manages to fight despite his injuries and they later sabotage Soyuz Two and scour the base searching for Dragovich who attempted to escape after the rocket was destroyed by getting away in a limousine while Kravchenko escaped via an Mi-8 helicopter. Dragovich was found and his limo was destroyed, but his body was never found and was officially stated as dead, but actually survived.

Sometime after the Soyuz Disaster, Kravchenko continued with the research on Nova 6 and traveled to Vietnam to conduct tests there. Nova 6 gas was released into Vietnamese villages in the countryside and the results were analyzed in a secret base located within the mountains of the country. When Kravchenko's operations in Vietnam were found out, a SOG task force was sent in with the intent of finding and killing him. During the operation, a Soviet hijacked American cargo plane was shot down by the CIA and crashed in the mountains of Vietnam with samples of Nova 6 still inside and the SOG was sent in to acquire the samples.

The SOG team fought to the plane wreckage against Viet Cong forces and even Soviet Spetsnaz troops, when the SOG troops found out that the Nova 6 had dispersed at plane wreckage and Viet Cong forces arrived and the wreckage fell and collapsed on the surface below the mountains. Spetsnaz troops came in to take away the surviving SOG troops and Dragovich revealed himself to be alive saying that he and Mason had "much to catch up on" seconds before Kravchenko knocked Mason out and took him to a Viet Cong base.

All of Dragovich's actions were preparations for an attack on United States with Nova 6, released with brainwashed sleeper agents that he had planted across the United States. He controlled them through his numbers station, and is ready to release Nova 6 and decimate America under his orders.

In the final mission of the campaign, Mason and Hudson attempt to capture Dragovich in the sinking Rusalka in Cuban waters, only to find the Rusalka was just a surface component; the real numbers station was in an underwater base beneath the ship. They fought their way into the base at the same time the attack from the surface was tearing the base apart, causing it to flood and explode bit by bit. After the two split up, Mason finds the broadcast control point on an overhanging platform and prepares to shut it down, but an explosion dislodges him from the platform. Mason grabs onto the edge of the platform just as Dragovich emerges from the smoke, expressing how Mason should've been his "finest agent" and that everything would've been simpler.

Just when Dragovich moved to execute Mason, Hudson intervened and shot him in the shoulder. While Dragovich was distracted on attempting to kill Hudson, Mason grabbed his arm and pulled him over the edge of the platform, dropping both Dragovich and himself onto the ground as water rose up from below. Mason then reprimanded Dragovich for the way he brainwashed him which resulted in the deaths of his SOG colleagues Woods and Bowman. After Mason reprimanded him for trying to make him kill John F. Kennedy, Dragovich tormented him by responding "Tried?". Mason then choked him to death under the water, ultimately drowning Dragovich underneath the rising water. 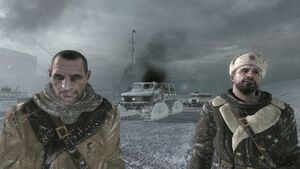 Dragovich with Kravchenko during Operation: Olympus. 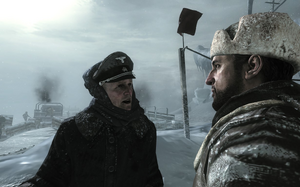 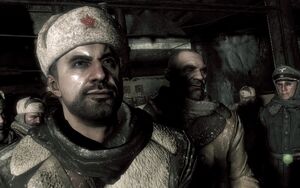 Dragovich with Kravchenko and Steiner inside the ship. 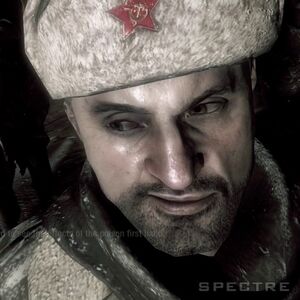 Close-up of Dragovich as he decides to use Reznov and his men as test subjects to demonstrate the weapon's poison. 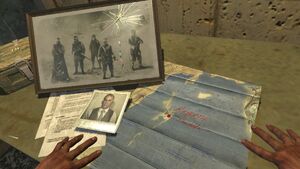 A picture of (left to right) Petrenko, Kravchenko, Steiner, Dragovich and Reznov during "Project Nova". 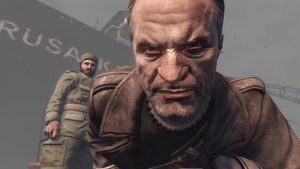 "I have plans for you, American." - Dragovich's evil grin. 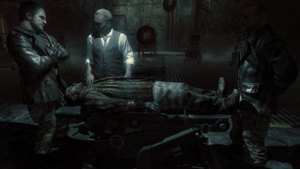 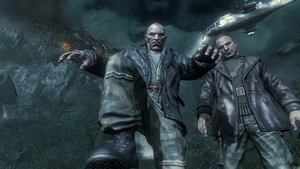 Dragovich with Kravchenko in Vietnam as they recapture Mason. 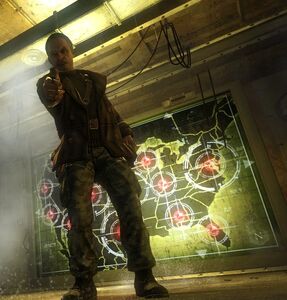 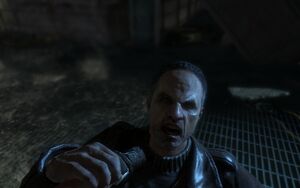 Dragovich being attacked by Mason for what he did to him. 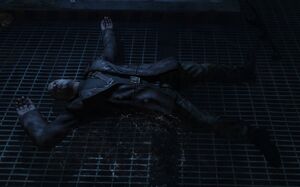