Defeat Luigi and prevent him from getting the elevator button.

Trio of Magician Ghosts.
Nikki, Lindsey & Ginny are a trio of ghosts that first appeared in Luigi's Mansion 3. Nikki, Lindsey & Ginny are female magician ghosts that reside in Twisted Suites, which is located in the eleventh floor of the hotel. They are collectively the twelfth boss encountered in the game and Luigi fights them for the twelfth floor's elevator button.

While in Twisted Suites, the trio appear after Luigi exits the elevator, to which they taunt him before moving out of the room. They appear in various rooms and continue to scare Luigi around the floor until he makes it to the main stage. Once the trio appear before Luigi, they duck in their hats and spin around him, causing Luigi to close his eyes in fear. When he opens his eyes again, he finds himself in what seems to be the trio's dimension and standing now on an octagonal platform. In front of him, the trio materialize and make a pose to start the battle.

The trio duck inside their hats and throw poker cards at Luigi, spinning around and trying to gang up on him. In order to defeat them, Luigi has to do a boost jump just in the exact moment they spin closer to him, knocking them out inside their hats. Luigi then vacuums one of the ghosts out of their hats, making them vulnerable. In response, they will try to hide behind Luigi and use their wands to attack. When Luigi manages to suck up one of the ghosts, the remaining two girls will get angry and will repeat the same attack pattern, but now adding a bomb to the third hat in revenge. Whenever Luigi catches the wrong hat, he will receive damage by the bomb and the ghosts will appear to laugh at him.

After succeeding in guessing which of the remaining hats has one of the remaining ghosts and vacuuming the second one up, the last remaining member of the trio will appear angry again, and now add two bombs to the hats of her former teammates. In this final phase however, the screen will momentarily turn black, blinding the player to seeing the hats and only allow them to see Luigi being thrown the cards. The hats will also try to move a little further from the platform to prevent getting affected by the boost jump. Luigi has to wait again for the right moment to use the function and knock the hats out. As each ghost is vacuumed, she'll desperately try to claw her way away from the suction, with the last one making an even more desperate move. After Luigi defeats the trio, he will be warped back to the room and receive the twelfth floor's elevator button.

At the end of the game, it is revealed that most ghosts in the hotel were brainwashed by King Boo, and thus were unwilling accomplices. Thus, this might also be true for Nikki, Lindsey, and Ginny. However, their eventual fate remains unknown. 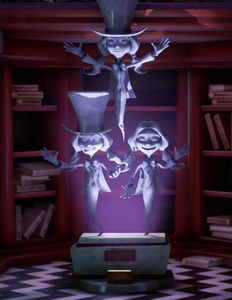 Statue of the trio together. 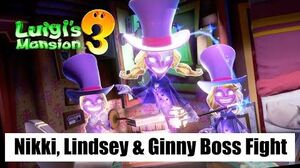 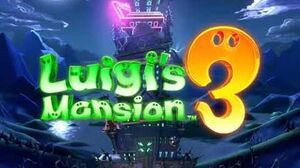 Retrieved from "https://villains.fandom.com/wiki/Nikki,_Lindsey_%26_Ginny?oldid=3983245"
Community content is available under CC-BY-SA unless otherwise noted.