Owner of the Coco Bongo nightclub

Controlling an army of mobsters

Prevent Dorian Tyrell from taking over his businesses (failed).

Niko is the mob boss of Edge City and a minor, but pivotal antagonist in the 1994 comedy film The Mask.

He was portrayed by Orestes Matacena.

Niko owns the casino/club the Coco Bongo which is a popular establishment compared to his other businesses and leads a group of gangsters with his right hand Dorian Tyrell. However, he has been hearing from his henchmen that Dorian's criminal activities are getting unwanted attention from the cops. He also learned that Dorian has been intentionally hiding his money and getting some gangsters to work for him.

Niko is worried that Dorian would take his position away from him and getting unwanted attention from the police, so he sends his henchmen to get Dorian for a meeting. Niko's men put a golf tee and a golf ball on Dorian's mouth while Niko waves a golf club in front of him. He hits the golf ball but leaves Tyrell's skull unharmed. Instead, Niko gives Dorian one week to leave Edge City or he would kill him.

Two nights after his meeting with his right hand, Niko celebrates with his men at the Coco Bongo by smoking cigars and drinking alcohol, believing that Dorian left the city. Unfortunately, Dorian (now wearing the Mask of Loki) blows up the doors of the Coco Bongo and enters the club with his henchmen. A gunfight erupts with Dorian and Niko's forces after the two crime lords exchange some words. Eventually, all of Niko's men were killed and Niko is challenged by his former second-in-command to shoot him in the stomach. Niko shoots at Dorian, but the bullets did not harm him. Dorian breathes the bullets and fires at Niko, killing him and sending him flying backwards.

However, Dorian ultimately didn't get away in destroying the Coco Bongo, because Stanley Ipkiss appeared on scene along with his allies and set into motion a chain of events which eventually led to Tyrell's death, so Niko arguably got the last laugh after all. 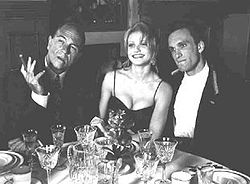 A promotional picture of Tina, Tyrell and Niko at the club.
Add a photo to this gallery

Retrieved from "https://villains.fandom.com/wiki/Niko?oldid=3654805"
Community content is available under CC-BY-SA unless otherwise noted.