Nikki
The Russian
The Red Menace

Sergeant Nikolai Belinski (Russian: Николай Велинский) is the Russian playable character in Call of Duty: Nazi Zombies, and has become a major character through the zombie series, being redeemed in the Primis Timeline. The Ultimis Nikolai share the model of Private Chernov.

Like all four characters, he is highly violent and overly fond of killing even by the standards of soldiers, and is the second most evil of the quartet next to Dr. Edward Richtofen. He rose quickly through the ranks of the Russian party through intimidation, blackmail and murder. He has been married several times, all for his own political advancement, and murdered at least three wives. He is also a raging alcoholic, always thinking of Vodka.

Nikolai's reputation was so widespread and so horrible that even Joseph Stalin himself was afraid of him, which was why Stalin deliberately drafted him into the front lines as soon as World War II started, hoping he would be killed. Like the Takeo Masaki and Dempsey, Nikolai had been captured by Dr. Richtofen prior to the events of the game(s) and experimented on with Element 115. After killing Dr. Maxis, Richtofen brainwashed them and gave them amnesia so that they would fight alongside him against the zombies as part of Richtofen's scheme to find Samantha Maxis and take control of the zombies. 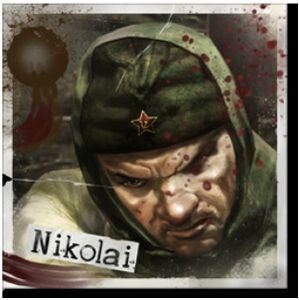