Become at least just as big (if not even bigger) than the band Maroon 5.

Nikolai Wolf is the overarching antagonist in the 2009 horror film Jennifer's Body. He is the lead singer of the band "Low Shoulder".

He was portrayed by Adam Brody.

When Jennifer is at a concert at a bar, Nikolai is followed by Jennifer. When she enters the band, he and the members of the band tie her up and have a demon spirit take over her body, so he worships Satan. However, the next day, everything is fine for Jennifer. However, Nikolai gets attention for his "good commitment".

Meanwhile, Jennifer becomes a demon and kills people left and right before Needy puts her down before she kills the entire male student body of Devil's Kettle High School. Needy later escapes an asylum to murder the band members to exact revenge for turning Jennifer into a demon as well as the people Jennifer killed as a demon, including Needy's boyfriend. And ironically, Needy kills him and the rest of the band with the very same dagger they used to sacrifice Jennifer. 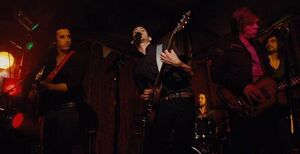 Nikolai with his band.