Villains Wiki
Register
Don't have an account?
Sign In
Advertisement
in: Female, Tragic, Once Upon a Time Villains,
and 72 more

Nimue (Once Upon a Time)

Plotting against the light (presumably)

Kill Vortigan for burning her village down (succeeded).

"Snuff out the light" and bring all the past Dark Ones back from the Underworld and wreck havoc upon Storybrooke (succeeded temporarily, ultimately stopped).

Nimue is the very first Dark One and the creator of the Darkness. In the fifth season, Nimue hatches a plan to snuff out the light in Storybrooke and joins forces with Captain Hook to achieve her goals.

She was the true love of the sorcerer Merlin, with whom she went on a quest with one day to make a sword out of the Holy Grail, stripping him of his powers and allowing him to be mortal and be with his love. However, during an encounter with Vortigan, the man who destroyed her town looking for the Grail she is fatally stabbed by him. However, she recovers shortly after due to drinking from the Grail herself, and rips Vortigan's heart out, with the intention of killing him. Merlin warned her that doing so while having the power from the Grail would cause her to succumb to the Dark Curse, which she refuses to acknowledge. As such, she crushes Vortigan's heart and kills him. This allows the darkness from within Vortigan's heart to infect her, transforming Nimue into the very first "Dark One". The Promethean Flame is extinguished to an ember, and Nimue goes on to shatter Excalibur into two pieces, in order to prevent Merlin from ending the immortality of both of them. Then, Nimue apologizes to him for her actions, but Merlin says no, that he is the one who is sorry. As the First Dark One, she now wears Vortigan's mask and clothing as her own.

Merlin used one half of the snapped Excalibur to create the Dark One's Dagger, biding the soul of the Darkness' host to it and forcing whomever the unfortunate soul is to be enslaved by the bearer of the Dagger. Shortly after accomplishing this feat, Merlin intended to use the Dagger to kill Nimue, blaming the Darkness for killing the woman she loved (by this time, the audience is led to believe that Vortigan is meant to be the Dark One), but cannot bring himself to do it. Dropping the Dagger. Merlin is transformed into a tree by Nimue, who departs with the Dagger.

At some point, she constructs the Vault of the Dark One, which would allow the current Dark One to come back to life using the Darkness. It would later be used centuries later by Baelfire, son of the Dark One Rumplestiltskin, to bring back his father after he had perished. At another point, she tried to steal Merlin's most-treasured item, the Sorcerer's Hat (which had the power to cleave her soul from the Dagger and not be controlled by it), from his Apprentice, but is unable to take it.

She is apparently killed off by her successor and is sent to the Underworld for her evil. However, she is able to communicate from the Underworld through the mind of the current Dark One.

When Emma Swan, the new Dark One, summons her to extract the last flame ember of the first fire (the Fire of Prometheus, which was used to melt down the Holy Grail), she mocks Emma for being nothing without Darkness. Emma rips the ember needed to complete Excalibur from her in response saying that she was never nothing. Nimue reminds Emma that she'll still be waiting in Emma's mind, but she had still decided to choose good over evil. A while later, she persuades Captain Hook, who also became a Dark One after Emma used the sword to save his life, to sacrifice Merlin's heart to create a Dark Curse to return everyone to Storybrooke where Hook may have revenge on Rumplestiltskin. Being the third time that the dreaded Dark Curse is cast, everyone is returned to Storybrooke; however, Emma manages to remove everyone's memories of the past six weeks in Camelot so that no-one would know that Hook is the Dark One.

In Storybrooke, Nimue and the past Rumple appear from Emma's mind along with all other Dark Ones and watch her complete Excalibur.

Hook is taken by Darkness Rumple to the pond which has a connection to the Underworld, and he sinks his hook under the surface. The hook, covered in the blood of a former Dark One (Gold, although still alive) allows all Dark Ones, Nimue included, to return to the world of the living. Nimue, wearing her mask, leads the group and walks on the water's surface towards Hook, graciously accepting his hand and removing her mask. She tells Hook they must do what all Dark Ones were meant to do - snuff out the light. Hook welcomes her to Storybrooke as the Dark Ones descend upon the town, bringing the full power of the living Darkness with them.

Nimue is the main antagonist of the Winter Finale, "Swan Song". She marks each of the heroes with the mark of Charon, sacrificing their lives for the Dark Ones'. She blasts the heroes and teleports them to the lake, where all Dark Ones are gathered. When Emma tries to stop her and Hook, she attacks Emma and easily incapacitates her. Hook snaps out of his evil, saying that this is enough. He turns on Nimue. She smirks, saying he can't defeat her, but he responds that he can before using Excalibur on her, causing her to disintegrate slowly and be sucked into the sword as part of the Darkness. Emma tearfully kills Hook with Excalibur, causing the whole situation to end and all the Dark Ones of the past to be sent back to the Underworld. The Mark of Charon disappears from all the heroes and Storybrooke is saved, but at the cost of Hook's life; this begins Emma's quest to the Underworld. 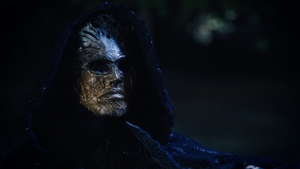 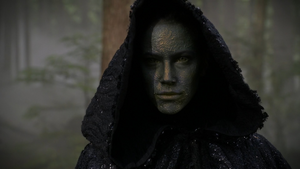 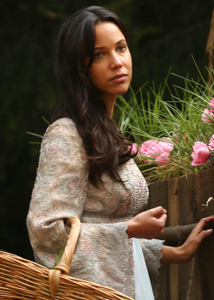 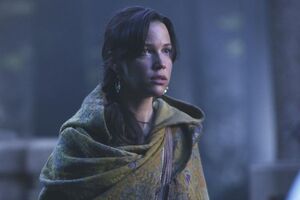 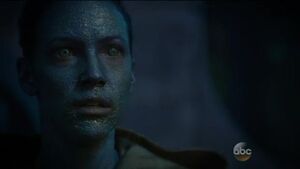