Exerting power over others.

Cleanse the world of who Strucker deems inferior.
Kill Jade for interfering in Strucker's plan (all failed).

Nina is the secondary antagonist of the 2003 film Bulletproof Monk. She serves as executive director of the Human Rights Organization, a charity founded as a cover to advance the hateful goals of her grandfather, a former Nazi officer. Behind the facade she serves as his personal henchwoman.

She was portrayed by Victoria Smurfit, who also played Cruella De Vil in Once Upon a Time.

Nina is the granddaughter of the film's primary antagonist, Strucker. As a Nazi officer Strucker led an attack on a Tibetan temple in order to obtain a mystical scroll but was eluded by the nameless monk it was entrusted to. Sixty years later an elderly Strucker continues to hunt the monk, who is empowered and kept young by the scroll's power. As a young girl her grandfather told her stories about the monk, but she never believed him until he showed her newspaper articles about miracles the monk performed.

As Strucker's right-hand she ruthlessly pursues the monk and his ally Kar throughout the film. In one scene she strangles to death the owner of a movie theater who refused to surrender information to her, and later kidnaps several monks who sheltered him to be tortured by Strucker.

Nina is first seen introducing herself as executive director of the Human Rights Organization, welcoming donors to a new museum exhibit featuring imagery of human rights atrocities (a woman on her knees held at gunpoint, children in squalor, a pile of human skulls, etc.)

She's questioned by Jade, daughter of an imprisoned crime lord and generous supporter of the organization, as to whether she worries that patrons will be inspired to carry out acts like the ones depicted. Nina attempts to appease her by saying they are merely showing patrons a glimpse of reality. In reality, however, the organization is a front crafted by Strucker to finance his hunt for everlasting life and a return of the Nazi regime under his leadership.

The monk is eventually tracked down and tranquilized by Nina and her men in Jade's mansion, where she discovers that the text of the scroll Strucker has been seeking is tattooed into his skin. She orders her men to take the monk alive, not noticing that Kar and Jade were warned by the monk to take cover. Jade recognizes Nina, or "That bitch who just wrecked my house", as the director of the Human Rights Organization she met that morning, realizing that the organization was a Nazi front all along. Personally slighted by Nina and her grandfather's organization, Jade volenteers to help Kar rescue the monk.

After taking him to their lair underneath the Human Rights building, Nina strips the restrained monk in order to scan the tattoos covering his body. Kar and Jade send an armored car rigged to explode into the gate of the facility, taking out several armed guards in front of the underground entrance. Strucker orders Nina to investigate the disturbance. The heroes handily defeat two more henchmen and infiltrate the building through an old water main, but the two are separated as a rush of water sweeps Kar away before Jade can reach him.

Fight with Jade and Death

While sneaking through the sewers Jade is intercepted by Nina and the two engage in a fierce hand-to-hand fight, during which Nina pulls a hidden sai from her boot when Jade proves to be more than a match for her. Jade disarms Nina and the fight continues until Jade feigns a punch, prompting an overconfident Nina to launch an overhead kick that Jade anticipates and narrowly evades. While Nina is thrown off-balance and bracing against the sewer wall, Jade breaks her extended leg with a well-placed kick of her own.

Nina, crippled and unable to fight, clings to the wall with her eyes wide in a mix of pain and shock. She likely expected Jade to take pity on her based on her financial support for the Human Rights Organization, thinking she was little more than a wealthy philanthropist. Unfortunately for her, Jade lives a double life as an underground fighter nicknamed Bad Girl, and she was far more violent than she appeared.

Nina gasps and her expression turns to sheer terror as Jade seizes her by the shoulder and yanks her into a sucker punch that sends her slamming back into the wall. Hopelessly outmatched and dazed by the blow, she makes one final effort to escape or recover her sai but Jade is on her in a flash, seizing her from the side and effortlessly overpowering her. Jade locks Nina by the right arm into an abnormal but effective nelson hold, positioning both hands around her head. Beaten into a stupor, the only resistance she can muster is a pained whimper as her body flounders in Jade's powerful grip. Her body hunches forward awkwardly with a slack-jawed expression on her face, possibly losing consciousness or struggling to breathe as Jade's grip on her broken body is all that is keeping her standing. Jade hasn't just defeated Strucker's bloodthirsty granddaughter, she's destroyed her.

Although she has no fight left in her, the beautiful young henchwoman is shown no mercy after all she's done; her punishment ends with finality as Jade throws her body forward while wrenching her head sideways, snapping her neck with enough force that the crunch of bone is audible. She is last seen hurled to the ground by the victorious Jade, her corpse skidding to a halt and settling motionless on the sewer floor.

Nina carries herself with a haughty demeanor whenever she isn't in the direct presence of her grandfather or speaking as executive director of the Human Rights Organization. She's extremely callous and sadistic when dealing with anyone that stands in the way of her grandfather's goals, not hesitant to murder anyone who puts up even a sliver of resistance.

She enjoys flexing her authority over people and villainously toying with those she has power over. She subtly hints at her true beliefs to Jade at the human rights exhibit knowing there's nothing she could do to expose her. Aware the restrained monk is celibate and uninterested in her, Nina takes sadistic pleasure in stripping and teasing him while scanning his tattoos.

It's unclear whether Nina shares the same hateful views as her grandfather or simply follows his orders out of fear. She reflects fondly on bedtime stories Strucker told her of the monk when she was a little girl and shows no sign of disloyalty to him in or out of his presence.

"Who would you choose to be?"

Nina posing as a health inspector.

Nina toying with the restrained monk.

Nina's eyes widen with terror upon realizing she'll be killed.

Nina's defeat and last moments as Jade keeps her body standing in order to snap her neck.

Nina's corpse, thrown to the ground after her neck is snapped. 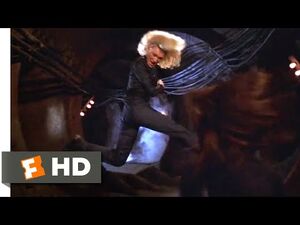