Help her uncle when he needs it.

Nina Cortex is a major antagonist of the Crash Bandicoot franchise. She is Dr. Neo Cortex's beloved niece. A gothic girl with bionic hands which acts a grappling hook, she has a fierce rivalry with Coco Bandicoot. She made her first appearance during the alternate timeline in the 2004 video game Crash Bandicoot Purple: Ripto's Rampage (A.K.A. Crash Fusion) for the GameBoy Advance as a supporting antagonist. And has continued to play smaller to more major roles in the following games, mostly as Dr. Cortex's henchwoman. However, she served as the main antagonist of Crash of the Titans, working for Uka Uka.

In the new main timeline she made her debut as a cameo in the 100% ending of Crash Bandicoot 4: It's About Time.

Nina was once a sweet and innocent girl who loved to hug cute and cuddly animals. She had a very unnatural love for cute furry animals and she was also generally kind-hearted. Her uncle Neo Cortex was worried by these signs of a pure heart and so he sent her to his old school, Madame Amberly's Academy of Evil to learn how to become a villain, but not before replacing her organic hands with bionic, spring-loaded, steel trap ones to stop her from hugging adorable critters (as they would be crushed by her new appendages). During her time at the academy, Nina changed from being sweet and innocent to a villainous goth girl who desired to commit acts of evil, much like her uncle.

In order to get the help needed to repair his damaged Psychetron machine, Neo Cortex with Crash Bandicoot go to pick up Nina from the Academy of Evil. Nina made her way to Cortex's airship across some rooftops and was flown to her uncle’s iceberg laboratory where she effortlessly fixed the Psychetron by hitting the side of a terminal. The trio then use the machine to travel into the 10th dimension, home of the Evil Twins. Upon arrival however, Nina was kidnapped by Evil Crash who used her as a sled to slide down a mountain. Crash and Cortex found Nina afterwards at Evil Crash’s house, where she then joined them to infiltrate the Evil Twins' base and eventually defeat the twins themselves.

Crash of the Titans

Nina is one of the main antagonists of Crash of the Titans where she commands an army of female rat minions known as Brat Girls. Uka Uka appoints her as head of their evil operations to replace Dr. Cortex, after he failed to kill Crash again. Nina willingly betrays her uncle and takes his place.

Now in charge, Nina brainwashed Coco into finish constructing Dr. Cortex’s secret weapon, the Doominator, to destroy Crash's island home while Nina herself kept watch over her own imprisoned uncle. N. Gin brings Nina and Coco to his weapon factory at N. Sanity Island, but by the time Crash and Aku Aku arrive, the 2 girls are already gone back to Wumpa Island with Uka Uka, at the Uka Tree. In the DS version, Crash finds Nina with N. Gin at the factory and Nina commands N. Gin to take care of the Bandicoot as she flees the place. After defeating N. Gin, Crash and Aku go after Nina back to Wumpa Island, and Uka Uka stays back in his tree to buy some time for Nina and the brainwashed Coco to finish the job with the Doominator and use it to destroy the island. During the final boss battle, Nina pilots the 'Arachnina' (real name Spiderbot), a giant mech suit which can transform from a robotic humanoid mutant into a laser-firing spider. However, Crash and Aku Aku managed to defeat her and the Doominator was destroyed just before reaching Crash's house. Cortex eventually gets free from his bonds and saves Nina from the Doominator's destruction. Cortex then reveals that he is proud of her for betraying him and promises to be more evil from now on, although he still intends on punishing Nina for her treachery.

In the Game Boy Advance version of the story there is a cutscene between Nina and Uka Uka, in which the furious boss mask scolds her for her incompetence and mocks the Cortex family as hereditary failures, then he removes Nina, which drives her to tears. The reconciliation between her and her uncle is pretty much the same as the console version.

In the Nintendo DS version of the game, Uka Uka is not present as a character and Nina is tasked by her uncle to turn critters across the islands into titans. She, however, decides on her own to take over Cortex's plot when she realizes that she's merely a "henchperson" and manages to gain N. Gin and Tiny's support. She eventually confronts Crash and, after a fight, the two decide to work together until they defeat Nina's uncle. Upon reaching Neo in his Cortexbot and holding him at gunpoint, however, Nina attempts to double-cross Crash and shoot him with her mutation gun. If the player hadn't gathered all collectibles by that point, Aku Aku will shield the bandicoot, and the ray will reflect back to Nina and turn her into a baby. In the extended ending, she becomes a teenager again and it's revealed that the events of the game were part of her exam. Should the player have all collectibles by that point, Nina will successfully turn Crash into a baby, defeat her uncle and then take control over Cortexbot and prepare to attack Wumpa Island with it.

As punishment for her betrayal in Crash of the Titans, Nina was held prisoner in Cortex's evil public school (that iconically wasn't located anywhere considered "public") which was under control of Nina’s former minions, the Brat Girls. Crash and Aku Aku were forced to break into the school and seek Nina’s help in foiling her uncle’s latest scheme for world domination. At first, Nina refused to help them, but soon reconsidered after the pair reluctantly agreed to kiss each other for her amusement and help her with her school project. Nina reveals that Cortex has reunited with his old colleague, Nitrus Brio.

Nina served as one of the game's bosses and is portrayed more childish, speaking in third person. She was called upon by Cortex to kidnap Coco Bandicoot and the Professor. Later Spyro and Crash Bandicoot arrive to rescue them and Nina calls Spyro "Purple Puppy". She is distracted by Crash and chases him, although Nina chased after him with intent on hugging him instead (which would still crush him due to her bionic steel trap hands). However, Crash managed to lure and trap her inside a cage. In the version of Spyro Orange, Nina chases Spyro and Crash frees Coco and the Professor.

Nina is one the playable racers in Crash Tag Team Racing and also serves as a quest NPC in the game's Story Mode. She is often in need of money to buy things, but her uncle apparently does not give her enough or anything, so she tries a job in Von Clutch's park. In this game, Coco is concerned to compete against her, but Nina does not show as much interest in this rivalry. Overall, Nina acts neutral, quiet, and antisocial, and loyal to her uncle.

Nina is a playable character that can be unlocked during Spooky Grand Prix event using Nitro Points. She is a Speed class driver.

In comparison to Dr. Neo Cortex, Nina is somewhat more competent and possibly more ambitious, usually concocting her own evil plots to carry out. She is also shown to be very smart, since she has been able to outwit her uncle on a few occasions and was capable of commanding his forces by herself. Nina even seems to have at least some knowledge working with advanced technology, as her help was needed to fix the Psychetron; a machine that can be used as a interdimensional gateway.

Nina can be bratty and egotistical, claiming to be "the queen" of Madame Amberly's evil academy while regarding other students as "the dreads of society". However, she has also admitted to being antisocial and can sometimes be found by herself brooding and plotting. 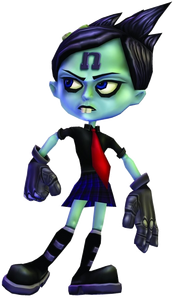 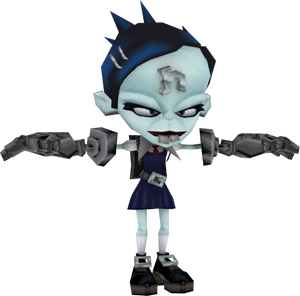 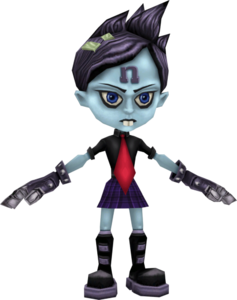 Nina in Crash: Mind Over Mutant. 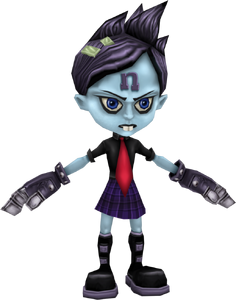 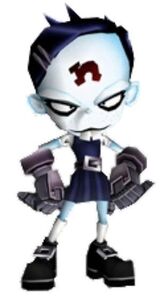 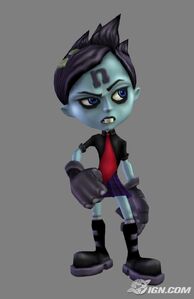 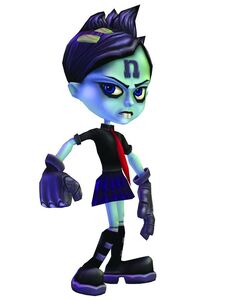 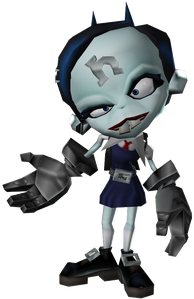 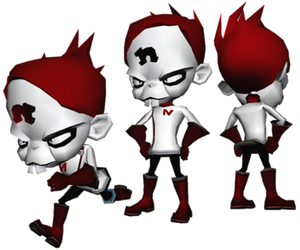 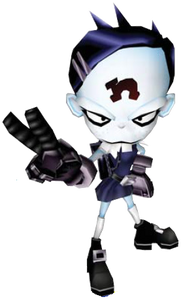 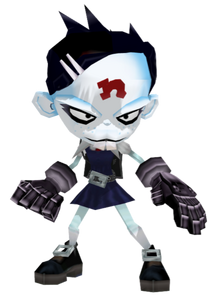 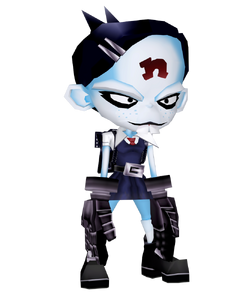 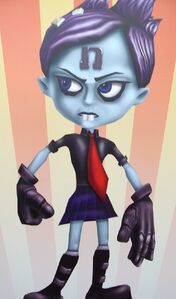 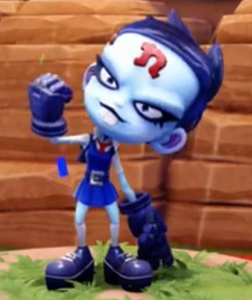 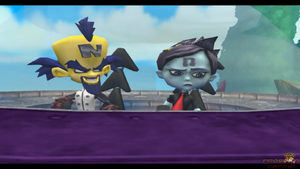 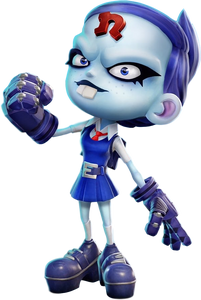 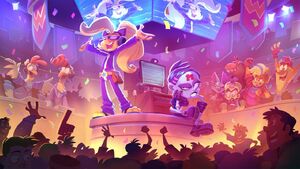