Murderous Ninjas
The Ninja Army is a minor villainous organization in Paradise P.D., only appearing in "Ice Ice Babies". They are an evil army of Japanese ninjas, who work for a Samurai Leader.

In "Ice Ice Babies", a ninja army suddenly bust into the room out of nowhere and kidnapped Stanley Hopson, right in front of Randall Crawford, who was supposed to be taking care of him at the time. Randall threatened the ninjas that if they wanted to take Hopson, they would have to go through him first and the ninjas pelted him with shurikens, making him drop to the floor in pain, severely injured before they took off. Randall later dragged his bloody body over to the door and there he saw Mailman Carl, who had just been severed to death by one of the ninjas.

Randall went down to the Japanese warehouse, where he saw the ninjas gathering. He snuck into the building dressed as Raphael from the Teenage Mutant Ninja Turtles and asked the ninjas where they hid Hopson. The ninjas immediately saw through his disguise and sprung right into battle stance, pointing their weapons at him. Randall hid in his turtle shell, which the ninjas kicked around. However, by kicking him around, they ended up sending him straight into the room where Hopson was, which Randall locked himself inside of, making the ninjas unable to get in. 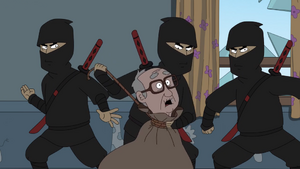 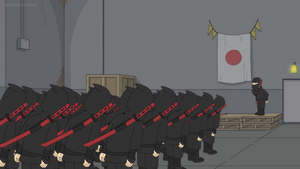 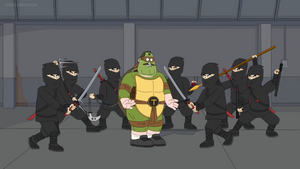