Nino Santangelo is one of the supporting antagonists in the 2016 video game Mafia III, appearing as a Cuban drug dealer and associate of the Marcano crime family. He is a well known sadist and racist who enjoys killing African-Americans, and is tasked by Sal Marcano to kill Lincoln Clay since he was out of options due to his criminal empire crumbling.

He was voiced by Jordi Caballero, who also played Gio Reyes in Justified and Soledad Marquesa in Grimm.

Nino Santangelo was born in Cuba during the late 1900s or early 1920s to unnamed parents, and would become an influential heroin dealer. He gained a reputation for sadistically enjoying killing African-Americans, presumably seeing them as a sub-race since it was common for the times. Before the events of 1968, Nino came into contact with Giorgi Marcano, who was the son of Italian mafia boss Sal Marcano, as Giorgi bought heroin from him to sell.

After Lincoln Clay kills Sal's second capo in New Bordeaux, Nino is contacted since Marcano is out of money due to his criminal empire being destroyed. Meeting with the Marcanos, Nino makes an agreement with Sal to kill Clay in exchange that he can sell his heroin across Louisiana. Though he wants to run his drug dealing business in New Bordeaux, Nino wants to kill Lincoln since he comments that he likes to kill African-Americans. Santangelo and his men would ambush Clay in the French Ward, but his subordinates are killed and he is fatally wounded during a shootout. While bleeding from his injuries, Nino rebukes Lincoln by calling him a racial slur, but is stabbed in the throat by Clay. As a result of Nino's failure, Lincoln would go on to prevent his heroin business from going through, and destroyed the Marcano crime family. 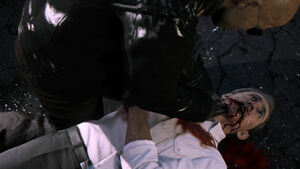