Trick The Lion Guard into chasing antelope whilst they hunt oryxes (failed).

Cowardly Traitors
Nne and Tano are supporting antagonists in the 2015 Disney TV film The Lion Guard: Return of the Roar, and minor antagonists in its 2016 follow-up series The Lion Guard. They served as the main antagonists of the episode "Janja's New Crew". They are two hyenas who are members of the hyena clan led by Janja, that live in the Outlands.

In the film and their earlier appearances in the series, Nne and Tano were unnamed and served as minor characters and never spoke lines. They along with the rest of their clan, aided Janja in trying to hunt animals in the Pride Lands, but were stopped by the Pride Lands' prince Kion and his group The Lion Guard.

They first appeared in the film, where they along with their clan, hear from Mzingo that Simba has asked Kion to form a new Lion Guard (as the previous one was destroyed by Scar after they refused to help him overthrow his older brother/Simba's father Mufasa), before joining in with Janja in singing "Tonight We Strike", where they plan to attack as many animals in the Pride Lands as they can before the Lion Guard is formed. However, at dusk, the clan attack a herd of gazelles, Kion and his newly formed Lion Guard arrive at the scene and stop them, before Kion uses the Roar of the Elders to send them back to the Outlands.

In the episode "Never Judge a Hyena By It's Spots", Nne and Tano join Janja and the rest of the clan in confronting a rogue hyena named Jasiri who was in their part of the Outlands. Kion (whom Jasiri had helped find a way out of the Outlands) heard the commotion and came to his friend's aid. When cornered by the clan, Kion saved himself and Jasiri by using the Roar of the Elders to blast Nne, Tano, Janja and the clan away.

In the episode "Can't Wait To Be Queen", Nne, Tano and the rest of the clan join Janja in ambushing Kion's older sister Kiara (who at the time was serving as temporary Queen of the Pride Lands whilst Simba and Nala were attending a funeral) when she arrived at Broken Rock (which is neutral territory between the Pride Lands and the Outlands) to have a supposed peace treaty with Janja. However, the real intention was that Janja was going to hold Kiara hostage until Simba handed the Pride Lands over to him and his clan. The plan failed when Kion and the Lion Guard arrived, resulting in the clan fleeing.

In the episode "Janja's New Crew", Janja fires his henchmen Cheezi and Chungu (due to them "supposedly" ruining his plans) and replaces them with Nne and Tano, who are ordered by Janja to drive Cheezi and Chungu out of the Outlands, which they do.

Back in the hyenas' lair, Janja tells Nne and Tano that he makes the plans, but the two declare that they have a plan. They explain to Janja that the plan is to distract the Lion Guard by making them chase after a herd of antelope whilst they (the hyenas) will go after a herd of oryx. Impressed, Janja accepts his new henchmen's plan.

The trio enter the Pride Lands, they panic a herd of antelope which succeeds in getting the Lion Guard's attention and makes them follow the herd. The trio then pursue the oryx, where during the chase, Janja runs into Cheezi and Chungu (who were allowed to stay in the Pride Lands by the Lion Guard), resulting in Nne and Tano continuing their chase without him. When Janja catches up with them, saying that they can't leave him behind as he is the boss, Nne and Tano turn against their leader and push him off a cliff, where he lands safely on a ledge.

Nne and Tano continue their chase until they corner the oryxes at a dead end, tautly asking them if they've never seen smart hyenas before. But before they can harm the herd, the Lion Guard arrive at the scene, after being informed of what was happening by Janja. The annoyed duo ask if Kion is going to use the Roar of the Elders, to which Kion says that they are smart, before using the Roar to send the duo flying away.

At some point prior to The Lion Guard: The Rise of Scar, Janja forgave Nne and Tano for their betrayel and allowed them to return to the clan.

In the second season, they along with the rest of their clan join forces with Ushari, Reirei's pack and Kiburi's float to serve the spirit of Scar and help him destroy The Lion Guard and Simba.

Nne is the shortest of the two with a black stripe down his face, a spiky mane, two fangs sticking out of his mouth and two hairs on top of his head. He speaks with an American accent.

Tano is the tallest of the two with a sleek mane, four fangs sticking out of his mouth (two pointing up and two pointing down) and three hairs on top of his head. He speaks with an Australian accent. 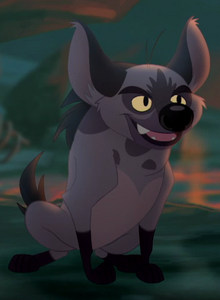 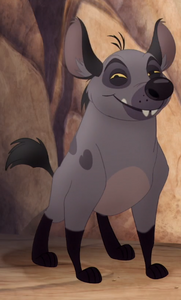 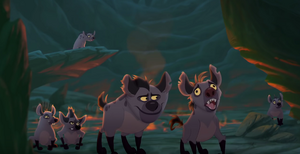 Nne, Tano and their clan. 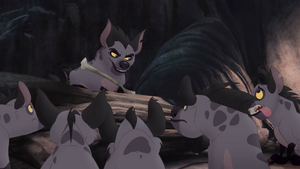 Nne, Tano and their clan looking to Janja. 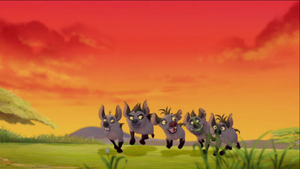 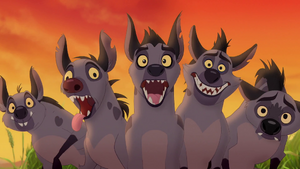 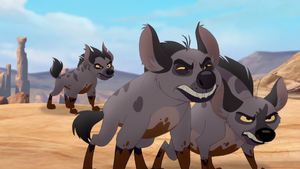 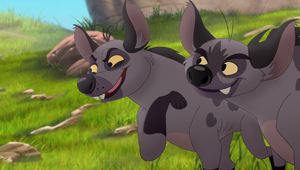 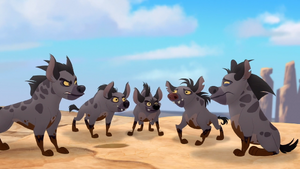 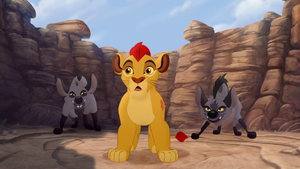 Nne and Tano vs Kion. 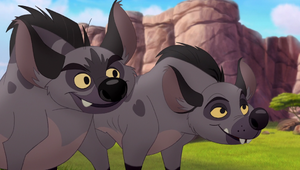 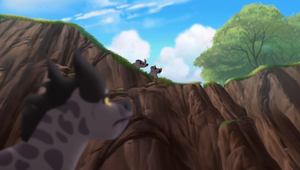 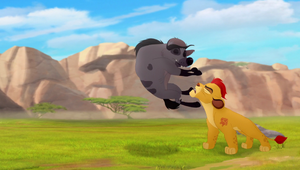 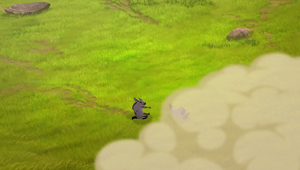 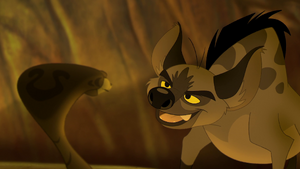 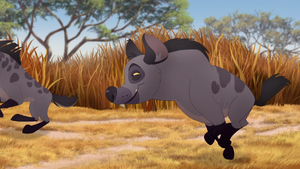 Retrieved from "https://villains.fandom.com/wiki/Nne_and_Tano?oldid=4130794"
Community content is available under CC-BY-SA unless otherwise noted.