To continue making money off of drugs (succeeded until his death)

No-Doze is a lieutenant of Tuco Salamanca's drug syndicate and a minor antagonist in the television series Breaking Bad.

He was portrayed by Cesar Garcia who also portrayed Raul Jimenez in Circle.

The man who only goes under the alias No-Doze assisted Tuco Salamanca, his employer, in forcefully extracting drugs from meth dealers Walter White and Jesse Pinkman, despite their obvious vetos against it. Though No-Doze rudely ransacked the two and aimed a gun at them, ultimately, he, Tuco, and another assistant, Gonzo, were scared out of killing the pair via an explosive sack of mercury fulminate. A few weeks later, after negotiating with White and Pinkman, Tuco managed to make a deal of four pounds of reasonably priced meth, a drug in which Salamanca snorted.

Tuco, already high and crazed, preceded to beat No-Doze to near death after taking a soft mutter with offense before dragging him off with Gonzo in a pickup truck. However, their retreat only lasted a few minutes, as Tuco apparently came to his senses and realized he practically murdered his top employee. Driving back to Walt and Jesse, the no longer high drug taker demanded they revive No-Doze when he started violently convulsing. No-Doze's life came to an end, probably due to shock, blood loss, and trauma, with a terrified Gonzo and Tuco hiding his body and driving off, leaving Walt and Jesse in the junkyard to stare in utter shock. 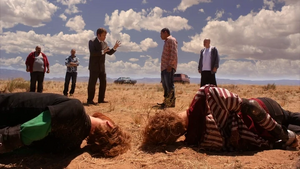 No-Doze present during the "trial" for Cal and Lars, who were defended by Saul Goodman. 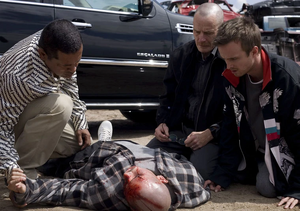 No-Doze after being mercilessly beaten by Tuco. 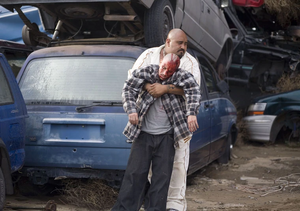