Devour everything that he can (formerly).

The Kaonashi, or No-Face as he tends to be called in the English releases of the film, is the secondary antagonist-turned-major character in the award-winning 2001 Japanese animated film Spirited Away.

No-Face is a dark spirit who resembles a black humanoid being with a white mask. He devours other spirits and can absorb their emotions into his own soul, causing him to take on their attitudes, especially negative ones, which lead to his transformation into a villain. He serves as an antagonist until his redemption.

Though he never truly speaks, his moans and coos were performed by Akio Nakamura in the Japanese version, and Bob Bergen in the English dubbed version.

No-Face is first seen lingering outside of Yubaba's Bathhouse, out in the rain. He takes an interest in her new servant, a human named Chihiro Ogino, because of her actions and sincerity. Chihiro sees him out in the rain, and not knowing who he is, allows him inside the Bathhouse.

No-Face follows Chihiro around the Bathhouse, even stealing several Bath Tokens for her. One night he approaches the spirit Aogaeru, a worker in the Bathhouse. No-Face lures him over with the promise of gold, then devours him, gaining some of his corrupt and greedy personality. With his negative qualities now further intensified, No-Face demands luxury baths and food from the workers, summoning large amounts of gold to tip them with. This makes No-Face a popular customer in the Bathhouse, as everyone wants to serve him and earn some of his money.

When No-Face attempts to tip Chihiro, she politely refuses him and rushes off somewhere else. Feeling insulted and betrayed by the one creature he actually has interest in, No-Face throws a tantrum and devours two more spirit workers.

No-Face begins to wreck havoc, demanding that Chihiro come to him. When she does, she denies his offering of gold again, and instead feeds him a dumpling given to her by a river spirit she helped. No-Face goes berserk and begins destroying the Bathhouse and chasing down Chihiro, but regurgitates everything he has eaten. With all of the gluttonous, greedy, and wrathful influences out of his system, he returns to a docile, calm state, showing remorse for his actions. He follows Chihiro to the good witch Zeniba's house, where he helps her.

When Chihiro prepares to leave, Zeniba requests that No-Face stay with her as a helper and stay away from the negative influences in the Bathhouse that could set him off again. No-Face agrees, and stays with her as a humble and kind servant.

At his core, No-Face is kind, gentle, peaceful and mysterious, though timid and with a dark and obsessive side. He indulges himself in actions and practices that he most likely knows will result in trouble and corruption. Though he does eat other spirits and harness their negative emotions, he is sympathetic and sensitive in that he realizes when he's gone too far, even if he does need a little help to realize this. In a way, No-Face is kind of like a child in the sense that he seems to imitate the behavior of those around him, which on the one hand, is what leads him to take on the greedy, indulgent and overall negative behavior of those in the bathhouse, but once Chihiro lures him away, he quickly reverts to his more gentle and docile personality again.

No-Face appears as a black, semi-transparent tube-like creature, with a white mask with purple stripes over his head. He has small arms with black hands.

When transformed, No-Face grows larger and fatter, gains many more arms and legs, and also reveals a large, slobbering mouth underneath his mask. 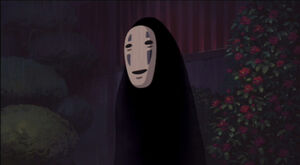 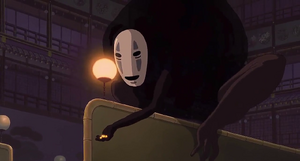 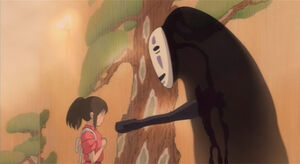 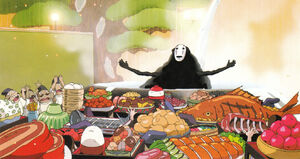 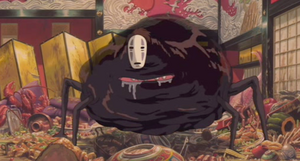 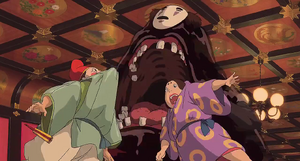 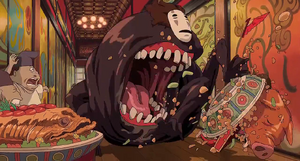 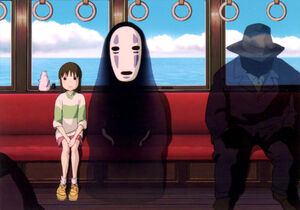 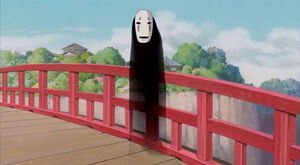 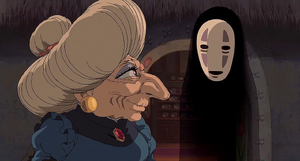 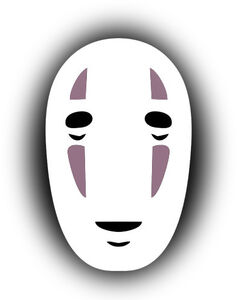 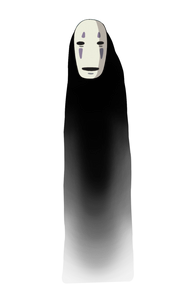