Find and kill the doctor that disfigured him.

Frank "The Tank" McCutcheon, better known as No-Face, is the driver of Crazy 8 and one of the protagonist villains in Twisted Metal: Black and in Twisted Metal: Lost the unfinished sequel to Black. After having been wronged by a doctor, he enters Twisted Metal to get his revenge.

He was voiced by J.S. Gilbert, who also played Kingdok in the Bone games.

Frank was once a small-time boxer that in his last match had his jaw shattered and nose broken by the end of the first round. Some of his fellow boxers told him they knew a doctor that could fix him up for a reasonable price. Without any other doctors he could afford, Frank went to go see Dr. Hatch but unfortunately for Frank, the doctor bet a large amount of money on him this night and lost it. As a result, Dr. Hatch cuts out Frank's eyes and tongue before sewing his eyelids and mouth closed all after putting him under, doing it all just out of spite. Frank was in pain and furious, so he tried to hunt down the doctor when he woke up, but ended up killing six innocent people.

Not long after Frank earned the nickname "No-Face" and was committed to a mental asylum to prevent him from attacking others and continue his hunt for the doctor who wronged him. Before long Calypso came and offered him the chance to get the revenge he craved if he won his contest. Seizing the chance, No-Face took him up on his deal and entered the contest. In his ending, No-Face went to see Calypso upon winning and to his delight found Calypso to have kept his end of the bargain. Dr. Hatch was tied to a punching bag and the same opera music played as Calypso gave No-Face a custom boxing glove that was covered in sharp objects. After killing the doctor No-Face jokes to himself that it was the only time he "knocked someone out with one punch".

No-Face is portrayed as a vengeful man who wants little to nothing more than to finally kill the doctor who ruined his life. However, it also seems that he is quite remorseful for the innocent people he killed in his fit of rage, but not for those he kills during the contest due to said desire for revenge. Following his profile according to Lost, he has killed some people he deemed "evil" in hopes he could reconstruct his own face, so his daughter wouldn't be scared of him and has been doing this for roughly eight years, but it is unknown if these killings were before Black or afterwards.

No-Face is a bald man with grotesque features due to his mouth and eyes being sewn shut. He wears a black suit with a dirty white shirt and black shoes. 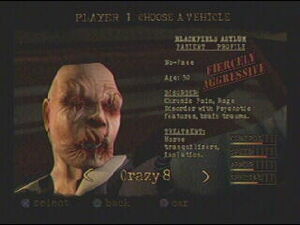 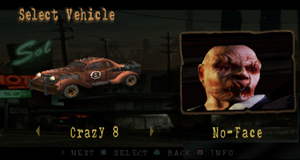 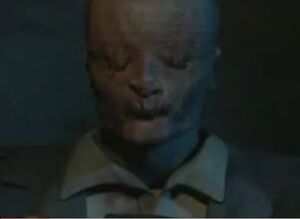 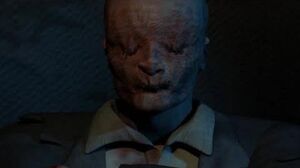 No-Face on the Heroes Wiki.