Kill Jax Briggs and get rid of the Special Forces (failed).

No Face is one of the secondary antagonists of the 2000 video game Mortal Kombat: Special Forces. He was a member of the criminal organization known as the Black Dragon Clan.

Little is known about No Face's background. He appears to have knowledge of incendiary and explosive devices.

One day, Kano breaks in prison and helped No Face, Jarek, Tasia, and Tremor escape.

Kano and the others set hideout locations all over the city, which No Face hid in an abandoned warehouse. Once Jax arrives at the warehouse he fought and killed No Face.

No Face makes a cameo appearance in Mortal Kombat 11 in a konsumable. 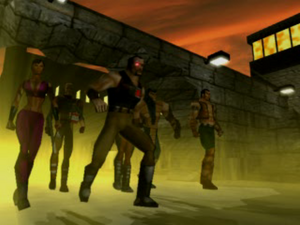 The Black Dragon members escaping prison.
Add a photo to this gallery 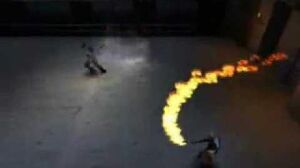 Retrieved from "https://villains.fandom.com/wiki/No_Face_(Mortal_Kombat)?oldid=3665198"
Community content is available under CC-BY-SA unless otherwise noted.