Each members are extraordinary stuntmen and stuntwomen

Each members possess their own different stunt abilities

Abduct children from cities where the circus performs and brainwash victimized children into acting as the organization's servants and as performers.

Contradictory Kidnappers
The Noah's Ark Circus is an antagonistic faction in Black Butler. It is a traveling circus troupe. Its members consist of stunt-oriented artists. The first-string members refer to their patron as Father.

The Noah's Ark Circus has visited a variety of places to carry out thrilling performances and provide entertainment for their audiences. It is of standard practice to erect a large tent or a circular arena composed of tiers of seats for the spectators to sit in and observe the show.

The show is, chiefly, comprised of wild and engaging stunts enacted by the troupe; each member possesses different skills and professions—among them are fire eating, flying trapeze, knife throwing, tightrope walking, snake charming, and animal training.

However, in each city the troupe has performed in, disconcerting incidents arise where a number of children have simply disappeared in the dead of the night. Despite the government's earnest investigations, the children cannot be found. Because the troupe's travels appear to coincide with any amount of missing children from the towns they visit, the troupe's undisclosed actions are very questionable. As a result, Queen Victoria sends Ciel Phantomhive on a mission to investigate the Noah's Ark Circus, recover the children and return them safely to their families.

The first-string members are regarded as the main cast of the Circus's sundry acts and performances. They are given private, individual tents. Additionally, they are not obliged to help with the preparations, and consequently do not have to fight for their meals, unlike the second-string members. 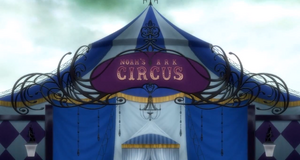 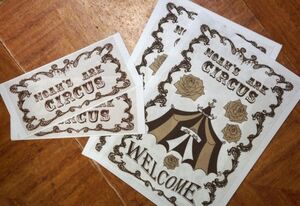 Retrieved from "https://villains.fandom.com/wiki/Noah%27s_Ark_Circus?oldid=3418477"
Community content is available under CC-BY-SA unless otherwise noted.