Noah is the third main antagonist of the Soul Eater's series, until it was revealed that Noah was a physical embodiment of the chapter and sin Greed called an idol created by The Index with the goal of collect Brew and the kishin Asura 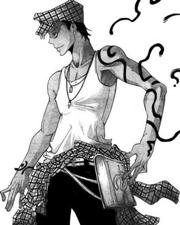 Noah's first appearance
Add a photo to this gallery

Noah is a dark-skinned male with silky black hair. He wears a plaid military cap, with a two metal rings attached to the left side. Alongside his plaid cap is a plaid-colored, long-sleeved, collared shirt that is frequently seen hanging from his waist. Noah also wears a white tank top that is worn beneath an opened black, open-collared jacket. He also wears black pants and shoes. He is obsessed with collecting anything he finds valuable, whether it is an inanimate object, like Brew, or a living being, such as Kid and the kishin Asura; Aside from this, he is rather calm, indulgent and respectful towards people during ironic moments. He addresses Arachne with honorifics even after he supposedly betrayed her, addressing Mosquito with the honorifics moments before killing him, and Kid with honorifics before sucking him into The Book of Eibon. Kid notes that Noah's soul feels incredibly calm and yet radiates a sense of bottomless terror. Alongside this, Noah appears to be unaffected by madness and compares it to "a gentle breeze".

Noah make his first appearance as a member of Arachnophobia, with the false name of Eibon. During the DWAM's assault at the Baba Yaga's Castle, he feels the presence of Brew during the fight between Kid and Mosquito and tranquillize the archonophobia's soldiers after the destruction of the protective towers, saying that Arachne had completed her magic training. after the destruction of the tower number eight the vampire butler Mosquito,followed by kid, confronts with him revealed that he is not the real Eibon and accuse him to Harming Arachne when her body become lifeless, before attack him. The battle end quickly, with Noah that easly kill Mosquito with one attack from his summoned creature, and he moves to trap Kid within the confines of his book, before exiting without interference.

After the Arachne's demise,Noah is seen when Justin appears out of The Book of Eibon and reports in on his failed attempt to approach and kill Maka. It should be noted that Noah has now formed a group consisting of Giriko, Justin, The Clown, and Gopher. Gopher then proposes to Noah that he would be better suited for the assassination of Maka. Noah agrees to this.

Noah is next seen sitting peacefully as he observes Gopher interrogating Kid. It is only after Gopher begins throwing punches that he kindly asks him to stop, before asking Kid to refrain from organizing the contents of "his" book without permission. Kid simply replies with a quip on how disorganized it is kept, eliciting another punch from Gopher. However, this time Noah reprimands Gopher, telling him to know his place because he does not wish the contents of his collection to be in anything less than pristine condition. A conversation then ensues between the other members present, resulting in Noah asking Gopher to go and make preparations for the assassination of Maka Albarn.

In a flashback of Gopher, it is revealed that Noah ordered Gopher to locate and assassinate Maka. He explains that Maka's soul perception abilities will serve to be useful in his quest for Asura. He then gives Gopher the option of bringing Maka back dead, likely to use her raw soul to locate the Kishin.

After Gopher's failed attempt at assassinating Maka and his subsequent rapid retreat, Noah is observed discussing the matter with him but rather than reprimand the apologetic Gopher for the defeat, he simply blames it upon the lack of power of his current developed body. However, the mood quickly changes when subject of speaking his name so freely in front of the enemy, provoking Noah into reminding Gopher of his place and that a mere tool such as himself does not have the right to have emotions. He then orders Gopher to leave his sight.

Noah is overjoyed at the recent completion of his latest creation, a belt which theoretically amplifies the magical output of the user by 10%. However, he remains dubious about the belts reliability and preferably doesn't want to use such an experimental object upon himself. This problem is easily resolved as Gopher aptly and willing fulfills the role of the test subject, especially when he comes to deluded conclusion that the belt was purposely manufactured for himself by Lord Noah.

It is decided that the destruction of an entire village will act as an appropriate first trial, but as Gopher begins to fire his Stomach Cannon, the belt malfunctions and explodes. Gopher makes an apologetic return, to which Noah simply dismisses him, more concerned about his own relief that he wasn't the one to test it. Noah proceeds to subsequently thumb through the Book of Eibon, looking at nothing in particular, while harboring the wish that Medusa's experiments will fail too.

With Gopher's recent discovery that he can effectively inflict various tortures upon Death the Kid by manipulating the conditions of his imprisonment to conflict with his O.C.D., Gopher proceeds to viciously deface the young shinigami through the asymmetrical use of a marker pen and tearing of his victim's clothing. Eventually, Gophers prolonged absence comes to the attention of Noah, who just manages to intervene before any irreparable damage can be administered to one of the precious pieces of his beloved collection. He quickly indicates that such a blatant disfigurement of an item he personally collected has placed him in a foul mood but rather than reprimand Gopher, he simply dismisses him with the instructions to go and prepare some tea. To prevent further occurrences of the instance that just transpired, Noah returns Kid to the confines of the Book of Eibon. Now alone, Noah utters the single word "geez".

Noah is sitting down mulling over his acquisition of Brew. He is now confident that, with his possession of it, everything will be his. He calls Gopher and informs him of intruders of his book (the team Spartoi had previous introduced in the book of Eibon with the goal of free Kid), before telling him to find Giriko and extirpate the perpetrators. Noah then becomes maniacal, revealing his obsession with collecting everything, even Ashura and Shinigami. He then seemingly activates Brew. When the group reach the Chapter of Wrath and meet Excalibur, Noah seemingly watches what is transpiring with a displeased look and calling it "unsightly." Later, he writes to Girico—who is within the book—that Maka and Soul are coming his way and entices him with the prospect of revenge. Recently Noah has entered in combat with the DWMA teachers. After killing (apparently) Tezca Tlipoca and injuring Maria,Sid and stein but he is confronted by Spartoi, that escaped from the book with Kid. Despite using all his creatures, incluse the powerful horror dragon, Kid manages to overwhelm him and blows him away. The Book of Ebion is left behind, which Gopher manages to grab before Maka can pick it up.

After the Noah's greed demise, Kid reveal that he was an artificial construct created by the book's Index for it's services by Noah collecting Brew for it and to have greed. After that he was replaced by a new Noah representing wrath.

Greed also appears in the soul eater videogame, that actually was released only in Japan, but with the name Grimoire. He is an tutor and ally of the witch princess Ponera. 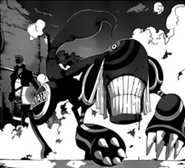 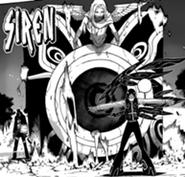 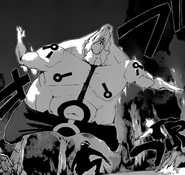 The horror dragon
Add a photo to this gallery 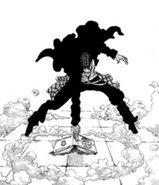 Teleportation
Add a photo to this gallery

After the demise of the greed incantation of Noah, the Index created a new Noah and made him personify Wrath. He tasked him with capturing the Kishin to harness his Madness.

The new Noah, have the same appearance of the first, except for the clothes and the hairstyle, but his temperament is totally different from the quite and calm personality of greed, he is in fact wrathful, nervous and aggressive as the sin that he represent, and he often unload his wrath on Gopher. Despite this, he have a great intellect and is determinate to collect Asura, as the Index want.

After his predecessor's unfortunate demise at the hands of Death the Kid, yet not before the successful completion of his task to obtain Brew, the Index create from the Book of Eibon another Noah, but this time in the "image of 'wrath'", thus a second Noah is born. Emerging from the confines of the book that created him, in front of Gopher, the Noah immediately grabs the throat of the young child and scream in his face "shut your mouth and follow me."

There is someone to admire

While the DWMA found the Kishin's hiding place on the moon and prepare an massive attack for defeat him, even Noah and Gopher fly on the moon.

he war on the moon

Later, he and Gopher are seen on the moon during the fight between the DWMA and the Kishin Asura and his never ending army of Clowns formed from his madness. The two are confronted by Akane and Clay, the intelligence's agents of the DWMA. They went inside the moon. Sid catches up to Akane and Clay but also encounters Noah and Gopher. Noah told Sid that they were using them when Akane said they were the ones being used.

The second war on the moon

When the DWMA defeat the clowns with the help of the witches, inside the moon the kishin wake up and confront with Sid, Akane, Clay,Noah and Gopher. Noah immediatly attack him, at first he summon the magical ants, but they are blow away by Asura, and after Noah, with the help of the index, use Brew for fuse himself with a giants ant that succeed to capture Asura. But when Crona arrive he is swallow with Asura by him and spit out after.

Asura vs Noah
Add a photo to this gallery

Unknown monster
Add a photo to this gallery 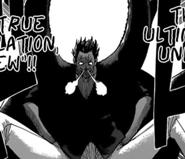 Ant fusion
Add a photo to this gallery

Retrieved from "https://villains.fandom.com/wiki/Noah_(Soul_Eater)?oldid=3864196"
Community content is available under CC-BY-SA unless otherwise noted.