Head of the water department in Los Angeles

Being stoic with his nature.

Enduring his lust for profit and success.

Incorporate the Northwest Valley into Los Angeles to bring water to the city for a good fortune.

Take custody of Katherine Mulray for himself.
Incriminate Jake Gittes to be a renegade in order to cover his atrocious crimes and true nature to both the citizens and authorities (all succeeded).

Noah Cross is the main antagonist of the 1974 neo-noir mystery film Chinatown. He is a wealthy industrialist and secretive crime lord who was the richest and most powerful figure in the city of Los Angeles.

He was portrayed by the late John Huston.

Noah Cross was a highly achieved business tycoon who became the richest and most powerful man in Los Angeles from 1937. Upon being the head of the city's water department, Cross secretly exploits his position to destroy water tanks and poison wells. During the start of the film, private investigator Jake Gittes (the film's main protagonist) learns that Cross's son-in-law Hollis Mulwray has been found dead in a freshwater reservoir. Gittes also learns that Mulwray had a girlfriend and was once a business partner of Cross, who then offers to double Gittes's fee in exchange for finding Mulwray's girlfriend.

Later on, Gittes soon learn that Mulwray was actually murdered, as he came across a conspiracy plan of using the new reservoir to irrigate newly purchased properties while leaving the Northwest Valley dry. At first, Gittes suspects that Cross's daughter Evelyn is responsible; this was further intensified when a woman named Ida Sessions (who was posing as Evelyn earlier in the film) was found dead with salt water inside her lungs. He also finds a pair of bifocals that were missing from the crime scene during the murder of Mulwray.

As Gittes confronts Evelyn, she finally admits that Cross raped her when she was 15 years old, resulting in her getting pregnant with her sister/daughter Katherine. She also reveals that she staged the rumor of Mulwray having Katherine as his girlfriend to keep her away from Cross. Evelyn also points out that the bifocals are not Mulwray's, since he didn't wear them.

Gittes then decides to help both Evelyn and Katherine escape into Mexico. While having Evelyn to meet at her butler's home in Chinatown, he summons Cross to the Mulwray residence, where he produces the evidence to prove that Cross is behind the murders. Noah then admits of his true plan: to incorporate the Northwest Valley into the city of Los Angeles, which will cover up his crimes and bring the entire city enough water to produce an extravagant fortune. Cross then has his henchman Claude Mulvihill hold Gittes at gunpoint, forcing him to take him to the women.

When the three reach the Chinatown hiding place, the police are already there and they detain Gittes. Evelyn will not allow Cross to approach Katherine, and when he is undeterred, she shoots him in the arm and drives away with Katherine. However, the police fire on Evelyn, killing her (much to Katherine's distress). Cross then takes the opportunity to take Katherine for himself and leads her away while a demoralized Gittes leaves with his associates in shame, with one of them saying, "Forget it, Jake. It's Chinatown.".

It is revealed in the sequel Two Jakes that Cross died between events of "Chinatown" and "Two Jakes" and in the final moment of his life, he named Katherine, heir to his vast fortune considering she is his only daughter left alive.

Cross has a personality of the typical classical villain. He is highly intelligent, cunning, devious, egomaniacal, manipulative, ruthless, sadistic, and utterly disturbing to the core. During his career of the villain he was shown as posh, elegant, luxurious and old-fashioned at first. Cross is also very charming and charismatic individual and can easy make people trust him.

When he first met with Jake, Cross made a look as quite sympathetic, pleasant and kind man and he was shown as kind, caring, and loving father to Evelyn. Only then he revealed his true intentions. Cross is actually utterly villainous, devious, brutal, dangerous and ruthless psychopath. He is extremely egoistical, untrustworthy, arrogant, traitorous and manipulative and is ready to commit murder, kidnapping and incriminating to complete his goals.

Cross is also shown to be a very greedy man. Later in the film, it is revealed that he murdered Evelyn's husband Hollis to claim his water for himself although Cross seems doesn't care about it. Cross is also highly hypocritical. And is shown in the film that he doesn't blame himself for raping his own daughter, justifying himself by saying peoples "at the right at the right place are capables of anything". He also tells Jake that "it's just a business".

Despite his villainous nature, Cross is also little shy and reluctant, as he tried to avoid publicity. Towards the end, Cross succeeded in all his his twisted plans and his last act of villainy was kidnapping Katherine. It is unknown what later happened, but possibly and most hopefully he would've been killed by Katherine as she managed to escape from him. 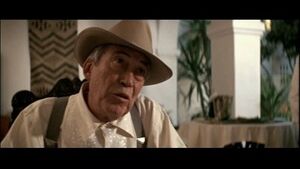 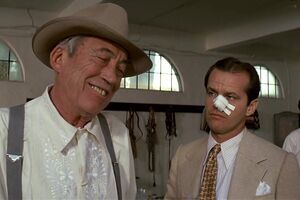 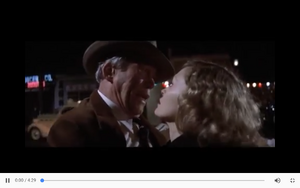 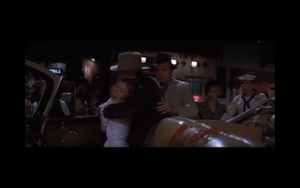