Butler to the Kadoya Family

Usurp control of Dai-Shocker from Tsukasa Kadoya and conquer the A.R. Worlds.

Attempting to destroy the Kamen Riders

He is a butler to the Kadoya family who is actually the A.R. Shadow Moon and the true mastermind behind Dai-Shocker's plan to destroy all Kamen Riders and conquer all of the A.R. Worlds. He later seizes control of the organization and usurps the Great Leader of Dai-Shocker, Tsukasa Kadoya, before leading Dai-Shocker's invasion of the multiverse.

He was portrayed by Ryuichi Oura.

Tsukikage was originally the caretaker of Tsukasa and Sayo Kadoya. After Tsukasa discovered his sister's ability to create dimensional bridges, Tsukikage used them to gather together foes of the Kamen Riders from across the A.R. Worlds to form Dai-Shocker.

After Tsukasa became leader of Dai-Shocker and left to conquer the A.R. Worlds (only to lose his memory), Tsukikage took care of Sayo Kadoya while he was gone. When Tsukasa returns to the Kadoya estate, Tsukikage welcomes him in. Tsukikage tells Tsukasa and his friends that the only way to solve the problem of the worlds merging is to stage a tournament involving the Riders of the A.R. Worlds to find the strongest Rider. However, once all the Riders are defeated, Tsukasa regains his memories of being the Great Leader and betrays his friends to reassume leadership of Dai-Shocker. When Natsumi and Yusuke flee to the Kadoya mansion, Tsukikage becomes Shadow Moon to attack them.

With the Riders dealt with, Tsukikage ousts Tsukasa as Great Leader of Dai-Shocker and becomes the new leader of the organization with the support of Dai-Shocker's other executives, declaring himself the "Creation King". He also convinced Sayo to become High Priestess Bishium and betray her brother, telling her Tsukasa never cared about her. Tsukikage then has Tsukasa ejected into the sewers, where Sayo brainwashes Kuuga Rising Ultimate to attack him.

As this is going on,Tsukikage orders Sayo to control Kuuga to eliminate Decade, but rather than fight, Tsukasa attempts to get through to Sayo and convince her she can "fly" by herself. Rebuffing Tsukasa, Tsukikage tells Sayo she cannot fly to keep her under his control, but Sayo refuses to listen and instead smashes her Stone of the Earth, freeing Yusuke. Taking matters into his own hands, Tsukikage transforms into Shadow Moon and goes to confront Decade and Kuuga. Shadow Moon easily defeats both of them until Kamen Rider Double arrives to fight him, beating him back before sending him flying into the wall of Dai-Shocker's castle. The 26 Kamen Riders then come together to perform "All Rider Kick" on him and finish him off. 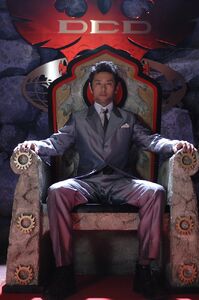 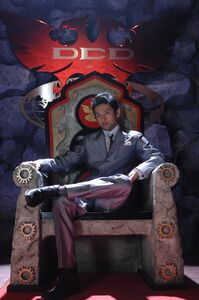 Tsukikage slouching on his throne. 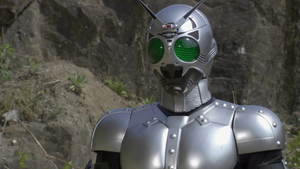 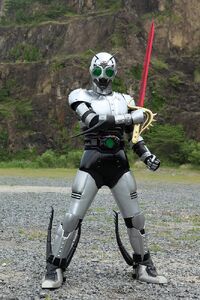