Drink bloods from the living (bat-types).

Youkais
Nobusuma are a type of animal-spirit from Japanese mythology and like most spirits classified as yokai they were once ordinary animals.

There are two types of Nobusuma exist.

This is the type of Nobusuma which, upon reaching a great age, were bestowed supernatural powers and new forms by which to live on as lesser deities and/or spirits that haunt the world. This type is the more famous of the two of Nobusuma types.

Nobusuma, despite appearing as flying squirrels, were original bats but tansformed into their current form upon becoming yokai and while primarily seed and fruit-eaters like common squirrels they have also developed unusual tastes for fire and blood.

As such the Nobusuma will attack and kill cats to drain their blood as well as other small animals, they will also ambush humans who are travelling at night and latch onto their faces, either biting and drinking the victim's blood much like vampires or trying to get them to drop their lanterns so they may consume the fire within.

Nobusuma, while born of ancient bats, are simply the start of an even more frightening transformation and should Nobusuma reach an old age themselves they may change into either the Momonjii or the Yamachichi.

This Nobusuma is derived from Nurikabe-type yokai and much lesser known of the two. It manifests as an invisible wall that impedes or misdirects travelers walking at night (in ancient times walking at night was especially unsafe and dangerous). This yōkai is described to be quite large; makes sense since it transforms into a big wall to prevent people from climbing over it, and wide enough to thwart any attempts to go around it.

Some iterations of the legend say that trying to go around the wall is futile as it extends forever. Others say that knocking on the bottom left part of the wall with a stick will make it disappear, but that knocking on the upper part of it will yield no result. This yokai is immune to man-made weaponry so attempting to smash the wall will prove futile. To expel this mischievous yokai the traveler must sit on the ground, calm down and maintain composure for prolonged period of time. After that Nobusuma will go away.

Yamachichi are evolved forms of extremely long-lived Nobusuma (bat-squirrel type) may become in ancient Japanese folklore, changing their original forms from bat-type to simian with a pointed snout and sucking lips. Therefore they are not separate species. Often confused with the Satori, these creatures are not related, despite sharing similar appearances.

Yamachichi have retained the vampiric qualities of the Nobusuma, but taken it to an even darker element, as they become nocturnal harvesters of human life-force, sneaking into the homes of sleeping humans and using their sucking lips to drain the life out of their victim. The yokai would then wake a victim after a nightly feeding via a prod to the chest, then flee into the night without being seen. It was said those awoken in such a manner would inevitably die within a day.

While dangerous, the Yamachichi could be defeated if a relative or victim awoke and caught the yokai in the act of draining their energy. The creature would panic and flee, extending its would-be victim's lifespan significantly in the process. 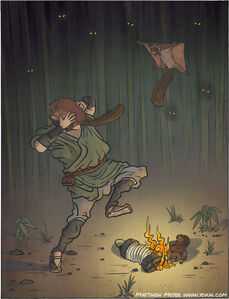 Give me some sugar, baby. 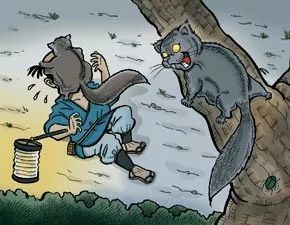 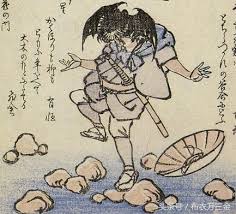