Brainwashing people and researching their minds to perfect his technology.

Force Asuna to marry him.

Complete his research so he can sell it and become a god of the world.
Kill Kazuto Kirigaya/Kirito (all failed).

Nobuyuki Sugou, also known as Alberich or Fairy King Oberon, is the main antagonist in the Fairy Dance arc of Sword Art Online. He is Asuna Yuuki ex-fiance and former lover, the former director of RECT Inc., former ruler of the VRMMO game ALfheim Online and arch-nemesis and self-proclaimed love rival of Kazuto Kirigaya aka Kirito.

He was voiced by Takehito Koyasu in the Japanese version and Todd Haberkorn in the English dubbed version; the latter also voiced E.N.D., Assassin (Unlimited blade works) and Bellion.

In the real world, Sugou has short dark brown hair, dark eyes and glasses and wears a business suit. He is fairly tall and has a red tie. During his fight with Kirito in the real world he wears a long brown coat and his right eye becomes swollen and engorged turning a pinkish hue with bloodshot veins.

In ALO his avatar has green eyes and wings, shoulder length blonde hair and wears a crown and long dark green robe and green cloak both with an emerald-like jewel. In both cases he has pale skin and in ALO he has long pointed ears as do all characters except Cait Siths but his have gold leaves on top of them like Asuna's avatar in ALO.

Sugou is an extremely cruel, callous, arrogant, sadistic, ruthless, deranged, and psychotic lunatic of his desire is nothing more than to become a god amongst all living things whether in the digital world or not. In addition he has a perverted and depraved mind as he gleefully assaulted Asuna in front of Kirito. However, he usually hides this beneath a polite, calm and soft-spoken manner while rarely losing his temper though he can become violent and aggressive, especially during his fight with Kirito. He is also deceitful, manipulative and highly intelligent which helps him inside and outside his avatar. While in his disadvantage against Kirito in real life, he is also a coward when he tries to run away only to be brutalized by Kirito.

Originally selected by Asuna's father to marry her he was soon adopted into her family on his wishes. He attended the same school with Akihiko Kayaba aka Commander Heathcliff who he viewed as his rival. Once Sword Art Online was cleared (until that point the SAO server was untouchable thanks to Kayaba's machinations and tampering) he was able to hack into it via the routers and obtain the minds of 300 out of the surviving 6,147 SAO players including Asuna as test subjects for research on controlling people's feelings and memories; in other words research on the manipulation of human souls. In ALfheim Online he adopted the persona of Fairy King Oberon.

As Oberon he kept Asuna locked in a birdcage at the top of the World Tree; in the real world he confronted Kazuto by voicing his intentions of wedding her. While keeping Asuna locked up he constantly visited her and brought her to the verge of tears by harassing her and making her aware he held full control over the virtual world.

After Kirito managed to ascend the World Tree and reach the cage Oberon appeared and used his administrator privileges to keep Kirito and Asuna pinned down with gravity magic. Once they were unable to move he used a menu to call down chains to shackle Asuna. After Kirito voiced his protest he used his own sword to stab him and turned the pain absorber down so Kirito and Asuna experienced real pain. Oberon then sexually assaulted Asuna in front of Kirito by removing her robes, licking her tears and groping her. Fortunately a digitized Kayaba saved them by giving him the details necessary to log in with Heathcliff's ID which due to ALO being an exact server copy of SAO had greater system authority; this allowed Kirito to use a Voice Command to nullify Oberon's supervisor status.

After this Oberon tried using a Voice Command to generate Excalibur, the strongest weapon in ALO for himself but to no avail. After Kirito repeated the same command and gave the generated Excalibur to Oberon he used another Voice Command to deactivate the pain absorber causing every injury to feel as if it were real. Even though Oberon tried attacking his rage and lack of experience left an easy opening Kirito used to strike his cheek. Afterwards Kirito lashed out with his accumulated anger by amputating his foe's hand, bisecting him and then stabbing his head through his eye killing his avatar.

In the real world Sugou attempted to kill Kazuto with a knife when he was going to the hospital where Asuna was being cared for. Even though he was in control for a while and had the chance to deal a fatal blow the pain of his eye which was stabbed in ALO with no pain absorption caused him to miss. Kazuto mustered the strength to overpower him and proceeded to take the knife pointing out that despite it having not real weight or length he could easily kill Sugou. Sugou attempted to run for his life only to have his head slammed into a car with enough force to leave an indent.

As Kazuto thought of all the things Sugou had done he was tempted to kill him only to decide he did not have the right to such decisions anymore and should let the law choose his fate. Eventually Kirito reported this and Sugou was found, arrested and sent to prison where he attempted to pin the blame on Kayaba but after an employee was questioned he confessed and revealed the full extent of his plans to the world which led to the downfall of RECT, its fellow companies including the remains of former SAO owner Argus and the world of VRMMOs. 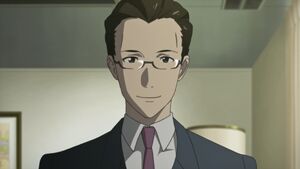 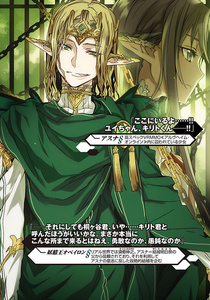 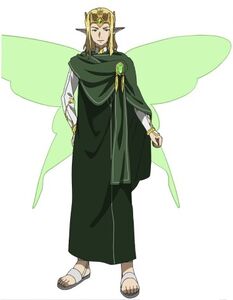 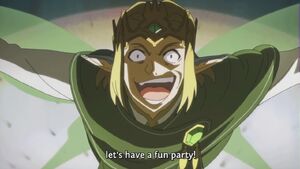 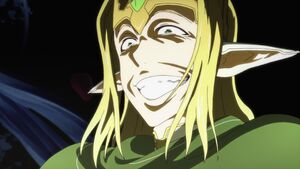 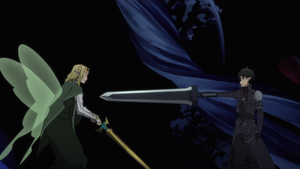 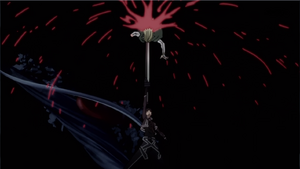 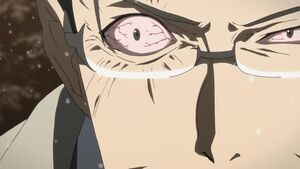 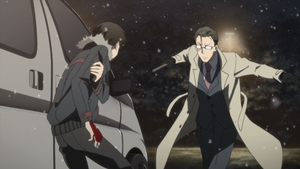 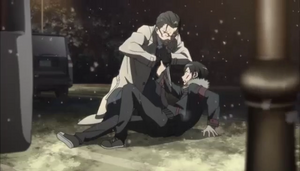 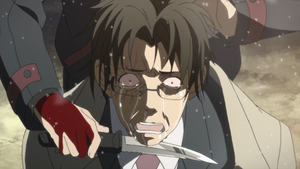