Nocan the Contrarian is a minor antagonist from WordGirl. As a barbarian, he enjoys destroying things. He hates all modern technology, even doors and desks. He is known to say anything contrary to what another will say (like if someone says "I'm strong", he will say "No, weak").

On the same day that Tim Botsford won the Mayor for a Day competition and had just entered his position, Nocan arrived on his ship from the far land of Contraria and declared he would make himself king. He did the next best thing by taking Tim's position as mayor, and when the people of the city came to him to try to get things approved, they got the opposite of what they wanted (for example: a man that wanted help on his taxes had his taxes raised instead of lowered.); WordGirl battled him and figured out his contrary ways, exploiting them to get what the people really wanted, as well as making him leave (by asking him to stay, the contrary villain was inspired to leave.); After this display of reverse psychology, Tim was allowed to resume his "mayor for a day" position, and WordGirl repaired the damage done by Nocan the Contrarian.

While Becky/WordGirl was celebrating Opposites Day, Nocan was sailing to his home until he accidentally ripped through his sail. He decided to get a new one at Fair City. The one he decided to steal was the Golden Sail. But he was interrupted by Becky's friends, who were also celebrating Opposite Day, and kept on doing the opposite of what he's telling them to do. Nocan begged for WordGirl to help, promising that he'll leave Fair City. Upon her instructions, Nocan gave the opposite of his commands and the kids left him alone. In order to solve his problem of getting home, WordGirl gave Nocan a trampoline as a replacement for his sail.

Chuck the Evil Sandwich Making Guy hired Nocan to be his apprentice at the city's sandwich-making contest. The prize was a huge sandwich trophy and a year's supply of bread. Nocan agreed, on the condition that he gets half of his reward of the bread. Chuck gave Nocan instructions through a microphone on how to make the sandwich. But Nocan kept doing the opposite of what he's told to do, causing Chuck to fire him and cause chaos with his sandwich-crusher. During the mess, a perfect sandwich happened to be made. Nocan claimed credit for it, winning the year's supply of bread. 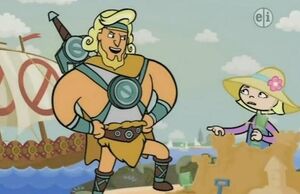 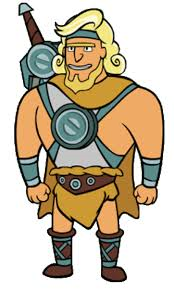 Portrait of Nocan the Contrarian