Mother of the Larva creatures

Insectoid Demon
Noctpteran ("Night Wing" in ancient Greek) is a giant mesmerizing moth which dwells in the Demon World and makes its home underground. She is both a boss and a minor villainess in the video game Devil May Cry 2.

Noctpteran is a giant moth-like monster that has a human-like head and huge golden wings.

Noctpteran is fought in the game by both Dante in Mission 10 and Lucia in Mission 6. It is unknown which of the two heroes encounters this entity first, but after the battle with both characters, the demonic moth is presumed dead. 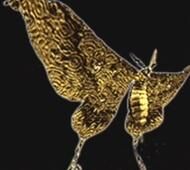 Noctpteran
Add a photo to this gallery

Retrieved from "https://villains.fandom.com/wiki/Noctpteran?oldid=4142949"
Community content is available under CC-BY-SA unless otherwise noted.