Servant of the Barraki

Assist the Barraki on the quest of finding the Kanohi Ignika.

Nocturn is one of the antagonists in the BIONICLE series, serving as a supporting antagonist in the 2007 storyline. He was an amphibious being who was responsible for destroying his own home island in a blind rage until he was captured by the Order of Mata Nui and imprisoned in the Pit. After his escape, he later became Ehlek's lieutenant when the former was recruited into the Barraki.

Nocturn was an amphibious being who originally lived on a small island with the rest of his species.

One day, Nocturn was consumed with a fit of rage as he lost control of his rage and struck the weak point of his home island, thus destroying the entire island. He then fled to the other island where he was eventually caught by the Order of Mata Nui and was sentenced in the Pit for his crime.

When the Great Cataclysm struck the Great Spirit, the earthquake destroyed the Pit and Nocturn and the other prisoners broke free from their cells. During the chaos, Nocturn killed Hydraxon, a jailer by ripping him in two after Takadox mortally wounded him. After that, Nocturn and several prisoners, including the Barraki escape into the ocean.

Once inside the waters, Nocturn was completely immune to the waters' mutagenic properties due to his amphibious nature as he spent his life inside the ocean after he realized that his presence was unwanted anywhere else in the outside world.

When he was encountered by Kalmah and Takadox, he took down a small group of Zyglak with ease. Impressed by his brutal strength, the two Barraki then took him before Pridak, the leader of the Barraki. An argument broke out, but it ended when Pridak bit off Nocturn's arm.

Not long after, Nocturn was recruited as Ehlek's lieutenant.

When the Mask of Light sank into the Pit, Takadox confronted Nocturn and asked if he knew anything about it. When Nocturn denied any knowledge, Takadox didn't believe him. In retaliation, Nocturn grabbed Takadox by the neck and threatened to snap him in two. Takadox used his hypnotic gaze to get himself out of that situation and give Nocturn explicit instructions regarding the Mask of Life.

Nocturn later found Takadox and Kalmah trapped inside an undersea cave. He opened a hole in the cave and fought the Zyglak inside, allowing the Barraki to escape.

When the Barraki found the Mask of Life, they gave it to Nocturn for safekeeping. However, since Nocturn was not destined to carry or wear the mask, he was cursed so his touch would cause instant death for any living being. He enjoyed this at first, but grew frustrated when he found that he could no longer enjoy watching his enemies suffer from pain. He dropped the mask in frustration and accidentally created the monster Gadunka.

Nocturn then decided to take the Mask of Life to Ehlek. As he searched for Ehlek, he was accosted by the Pit's former jailer Hydraxon (really the Po-Matoran Dekar changed into the form of Hydraxon). The two fought over the mask, until Hydraxon overpowered Nocturn. Right around that time, Hahli and Mantax came to take the Mask of Life. Nocturn took the chance to escape.

Later, Nocturn rejoined Ehlek's army. He assisted the Barraki in the assault on the Maxilos robot that was possessed by Makuta Teridax. After defeating the robot, the Barraki went after the Toa Mahri. The Barraki were gaining the upper hand in their battle, but the Toa were transported by the Mask of Life out of Mahri Nui.

Nocturn was then caught by Hydraxon again and locked up in the Pit once more. He was killed when he attempted to escape. He was then transported to the Red Star, where despite being revived and given a new body, he is unable to leave due to the Star's teleportation being broken.

Nocturn as he appears in the comics. 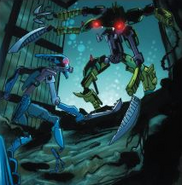 Nocturn was being interrogated by Takadox. 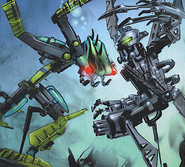