The Eternal Nightmare
Demon of Nightmares
The Living Shadow

Feed off of his victims' nightmares

Nocturne, also known as The Eternal Nightmare, is a villainous playable character in the multiplayer online battle arena game League of Legends, who serves as the main antagonist of the short stories For Demacia and The Shadow Door.

A demonic figure that haunts dreams, Nocturne is a force of endless fear, feasting on the terror of the living and tormenting the nightmares of everyone he comes across.

The seventy-second champion added to the game, Nocturne was released on March 15, 2011. He is most commonly played as a jungler.

He is voiced by Jason Wishnov, who voiced Chen Gong in Dynasty Warriors 8 and Monodam in Danganronpa V3: Killing Harmony.

In the realm of Runeterra, shadow magic is a deadly and controversial art, having been banned for centuries for fears of summoning horrible spirits, such as Nocturne, the worst of the bunch. Near the end of the Rune Wars, groups of mages used every trick in their books to gain ahead in the battle, and among their tactics, many chose to become spirits, fighting in nearly incomprehensible tactics. Mortal beings feared these specters and their abilities to haunt every moment of their lives and driving those to commit sinful acts against their fellow men. It is unknown if Nocturne caused this all himself, but he himself was formed from pure dread. It was a lawless, cold, and maddened being that desired uncontrolled havoc. Even its former friends were not spared, as Nocturne savored their terror as he set himself on them before ending their lives.

The effect of Nocturne was so great if might have had a role shaping the result of the Rune Wars, but after the banning of shadow magic and its lore hidden, Nocturne was trapped in his spirit realm. With barely anyone coming for it to feast, Nocturne could only rely on the dreaming mortals to feast upon, as their were in between the two realms of mortals and spirits. After finding a way to be summoned to the mortal plane, Nocturne is the fears of the people made solid, and Nocturne will find weakness and cause true fright to whoever expresses it.

In game, Nocturne is an assassin-type character, with his passive ability known as Umbra Blades allowing Nocturne to enhance his basic attacks to heal Nocturne. Nocturne can also send a trailing blade of shade (In this trail, Nocturne ignores collision and is faster) with Duskbringer, gain a spell shield and power his attacks with Shroud of Darkness, tether himself and cast damaging nightmares with Unspeakable Horror, and reduce his enemy's sight and dash towards foes with Paranoia.

Nocturne is shown to be an uncaring and sadistic being who only lives to torment his victims. With knowledge of everyone's worst fears, Nocturne is an expert at this, singling out his enemies' weaknesses and creating deep, psychological dread and loneliness in their hearts. While this could be explained as just being his nature as a demon, Nocturne seems to enjoy making people suffer, feeling disgusted by the light in the world and hoping to plunge each and every soul he meets into eternal darkness. He shows no mercy to innocents, and kills without remorse, making him one of the most evil characters in the game.

Another version of Nocturne's artwork. 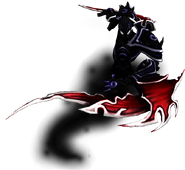 Nocturne as he appears in Legends of Runeterra. 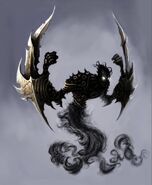