Keep living in fame and wealth.

Bully his rival Andy Bangs as revenge (all succeeded).

Nom Nom is the main antagonist of the 2015 Cartoon Network show We Bare Bears. He is an egotistical, fame-flaunting koala bear who doesn't like having any friends but his servants. He is also Grizz's former archenemy.

He was voiced by Patton Oswalt, who also voiced Franz of the Lilliputtians in Gravity Falls, The Anomaly in Marvel's M.O.D.O.K., Tobey McCallister in Wordgirl and Professor Dementor in Kim Possible.

Nom Nom's fame has made him egotistical and manipulative in front of other people. He thinks friends are annoying, and messy and prefers having his servants abide to his every whim than have friends.

He also loves the spotlight to himself as shown as he reluctantly shared the filming stage with a hamster. This desire for the spotlight also extends to a willingness to endanger the lives of others, as seen in "Nom Nom".

Despite his gloryhounding nature, Nom Nom is not entirely bereft of sympathetic qualities, as he is willing to reach out to Grizz when he needed the most such as the latter comforting him to cool down his anger and protecting him from obsessed fans and stalkers.

In "Viral Video", Nom Nom is seen as one of the animal judges at Meme-Con. He is shown to disapprove of a tap-dancing pigeon's act, and later disapproves of the Bears's performance by going to sleep. Nom Nom is seen being escorted to a limousine as Grizzly has a chat with him. At first, one of his guards is about to kick him out, but Nom Nom stops him, taking the situation from here as Grizzly has moxie. Nom Nom pretends to be interested in Grizzly's video and even gives him some snacks. As soon as Grizzly mentions that he loves to have friends, Nom Nom has had enough and mockingly replies that he doesn't need any friends, stating that they are too loud and messy. With that, the koala gets his bodyguard to toss Grizz out of the car. He takes a picture of his depressed "friend" and sarcastically says goodbye to him as his servants drive him away from Grizzly.

In "Nom Nom vs. the Hamster", he gets into a feud with his co-star and stomps off to his trailer as the confused hamster states is he's on break.

His second appearance in the show itself, "Nom Nom", officially earns him villain status. After a breakdown on the set, Nom Nom loses his crew and is left a wreck. He turns up at the bears' house to ask for their help in reclaiming his fame. Nom Nom manages to win over Grizzly and Panda in his "comeback movie" project, but Ice Bear remains suspicious-especially as Nom Nom steals his brothers' attention. Ice Bear comes across a whiteboard detailing Nom Nom's true scheme, which would have him "rescue" Grizzly and Panda. This "rescue" would involve endangering their lives with his pet sharks, both of which have attack triggers in their collars. (His notes also demonstrate that he doesn't care if they get killed in the process, as long as he reclaims his fame.) Unfortunately, Ice Bear is trapped by Nom Nom in a deep pit, and is left covered, alone, and unable to call for help.

At the "shoot", Nom Nom tricks Grizzly and Panda into entering a local pool, wherein he releases his sharks. Set to their attack mode, the sharks try to maul Grizzly and Panda. Nom Nom attracts the attention of the local pool-goers, and loudly declares he'll rescue them. Unfortunately, in his attempt to "rescue" them, a panicked Grizzly destroys Nom Nom's collar control, leaving the pet sharks in a total frenzy. Nom Nom begs for his life, yelling at the sharks to devour the bears. Fortunately for all three, Ice Bear manages to escape the pit, after catching the mailman delivering Grizzly's mail-order RC helicopter. Saving his two brothers, Ice Bear kicks Nom Nom into a cotton candy machine, a scene that regains his fame. Grizzly and Panda remain unaware of Nom Nom's real intent, still believing it was an actual movie being shot.

In "Panda's Sneeze", Nom Nom gets angered that Panda is getting more views (his sneezing video) than his videos and challenges Panda to a cute off. Nom Nom makes a deal with Panda to not make him famous by dressing Panda in an unconventional getup. As Panda is walking on the catwalk, Nom Nom intentionally sticks his foot out and trips Panda. He gives him a smug look as he gets more cute points than Panda. After Grizz encourages Panda to win, Ice Bear gives Panda a rose, causing the pollen to get on Panda's nose, resulting in Panda starting to sneeze. Panda gets points from the cute meter and he realizes that the people came to see him fight Nom Nom. Angered at Panda's increasing progress, the koala hits Panda with a pillow that rips apart. A feather lands on Panda's nose and he accidentally sneezes Nom Nom off the stage, making Panda the winner of the cute off. However, Panda's sneezing sounded less cute, causing a majority of people to leave the stage in disgust. Nom Nom then proclaims himself as winner of the cute off and he greedily hugs his trophy from the other bears. Just then, Ice Bear's unstable robot bear heads to the dark abandoned stage, destroying the trophy and takes Nom Nom with him, after seeing how cute he is.

In "Nom Nom's Entourage", he temporarily hires the Bears as his entourage in order to best his rival, Andy Bangs. At one point, he intentionally scares Andy without the need of the Bears and drops them off (quite literally) at their house before he leaves. He keeps a picture of the Bears when he leaves, showing that he have a bit of a soft spot for the Bears.

Nom Nom is the main antagonist of the special "Captain Craboo", where he appears to have forgotten that he was friends with the Bears and he is signing autographs for every fan that he has at a grocery store. As the Bears try to talk with Nom Nom for an autograph, the latter pushes Ice Bear to the ground, causing Craboo to defend Ice Bear by jumping onto his attacker (Nom Nom) and pinching his ears, causing the koala to scream in agony. Angered, Nom Nom commands security to arrest the crab and send him to jail. In court, Nom Nom claims that he loves crabs, even though he was disgusted upon first encountering the crab, and states that Craboo is a dangerous crab and must be put to death, much to the Bears' shock. However, after Grizzly nearly succeeds in proving that Craboo is innocent, Nom Nom sets up the case by making it look as if Craboo is attacking him, causing the judge to proclaim that Craboo is guilty. A high-speed chase ensues as the Bears run through the interstate highway and into the ocean to get Craboo to safety, but Nom Nom mans a helicopter were he manages to catch Craboo, and he attempts to kill the crustacean, but Craboo manages to pinch Nom Nom's nose, causing him to lose his grip on Craboo after fighting for a parachute, and the Bears manage to get the parachute and save Craboo's life. Nom Nom, however, plummets into the water, still alive, but exhausted. After the Bears let Craboo go, Nom Nom arrives and demands that the cops arrest the Bears, but the cops tell the koala that there is no evidence that the Bears helped in the escape of Craboo. After refusing to comply to the law and after throwing a hissy-fit on the cops, they arrest Nom Nom for insubordination. 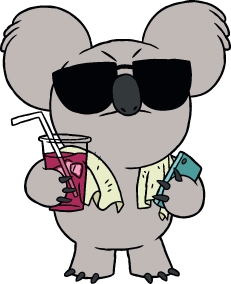 Nom Nom pretending to be friends with Grizzly. 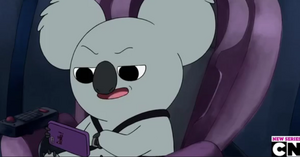 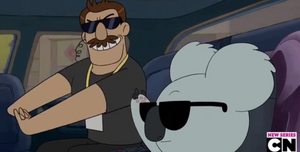 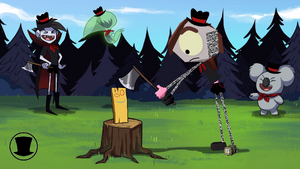